My first pistol, a gift from my bride long ago, was an early production long-barreled Standard (Mark I) Ruger .22. I loved that pistol from first sight, touch and trigger press. It trained friends and family for many years, and still does, with nary a hiccup or bobble!

Over the years I have owned and written about many of Ruger’s firearms, and each has followed in the footsteps of my first—working flawlessly. Ruger has grown far beyond the company that produced my early pistol, offering hunting, self-defense and military/LEO firearms undreamed of before.

Gun Details
Back in the fall of 2007, when Ruger introduced its first striker-fired pistol, the SR9 pistol, it caused quite a stir. Until the SR9’s arrival, everyone “in the know” was betting there would never be such a critter wearing the Ruger logo.

Making use of their extensive experience with metal castings and polymer molding, Ruger stepped out with a pistol that became an immediate hit. Demand was high for the SR9, but still the public clamored for variations including smaller sizes and larger calibers.

With a 3.4-inch barrel, the new SR40c may be smaller than its progenitor and weigh only about 24 ounces, but still displays the family heritage. The either carbon or stainless steel slide is precision machined from a casting, with hardening going deeper than typical (through hardened). Stainless slides have a brushed appearance, while steel versions are treated with Ruger’s Nitridox Pro Black finish. 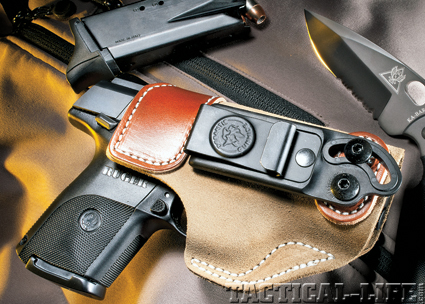 The author tested the SR40c with the DeSantis SOF-TUK, a combination IWB/tuckable holster that proved to work quite well with the pistol.

The front sight has small horizontal serrations, while the rear is elevation adjustable and nicely rounded to be snag-proof. Also atop the slide is the tactilely and visually detectable loaded chamber indicator that pops up when the chamber is full. The extractor is external, as on previous Ruger centerfire pistols, and the ejection port is generous. Sporting angled cocking serrations fore and aft, the slide of Ruger’s compact is also well dehorned. In fact, except for a small sharp edge on the shooter’s side of the front sight, there are really no sharp edges or points anywhere on the SR40c.

The SR40c’s striker is partially cocked by the slide’s rearward motion, with the balance of the striker rearward movement, before it snaps forward, resulting from pressing the trigger. In the partially cocked condition, you can see, but not feel, a circular “striker status indicator” in a tunnel in the rear of the slide. As the trigger is pressed rearward, the indicator protrudes from the back. Riding beneath the satin stainless steel barrel is a recoil spring captured on a full-length guide rod.

The SR40c’s trim polymer frame is black, glass-filled nylon with dished out areas on both sides of the grip adding to the trimness and further easing the reach to the trigger. The round, generous triggerguard is slightly undercut and encloses a trigger with an integral pivoting safety. In fact, there are three more safeties incorporated in the SR40c: magazine, striker block, and a minimally sized ambidextrous thumb safety. When applied, the thumb safety blocks the striker movement and locks the slide in position. 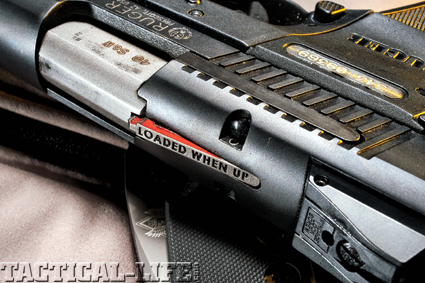 A large loaded chamber indicator behind the ejection port of the SR40c offers both visual and tactile indication of the chamber’s status.

In the handling department, beside the overall trimness of the grip area, the SR40c is graced with an ambidextrous magazine catch release button, fine checkering on the frontstrap and panels in the grip areas, and, what is slowly becoming de rigueur, an interchangeable backstrap.

Ruger’s serrated, black rubber interchangeable backstrap, though, differs from most by being a single piece. It is easily changed from arched to flat, or vice versa, by simply removing the backstrap and turning the one-piece part over. The magazine well is not beveled, something that seems essentially unnecessary with a narrow-topped double column magazine.

Two metallic magazines shipped with the SR40c: a nine-rounder with an extended pinky finger plate and a longer version holding fifteen rounds and wearing a spacer to insure is cannot be driven too deep into the pistol during a reload. A replacement flat floorplate for the nine-round magazine is included in the pistol’s black polymer box. 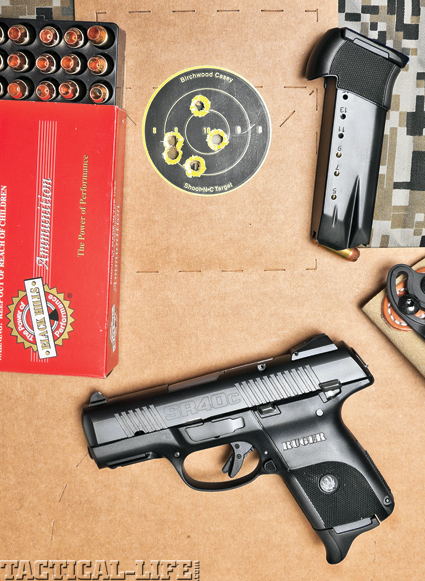 Range Time
On the range one thing became quickly apparent—recoil seemed less of a problem than with many small pistols chambered in .40 S&W. I credit the pistol’s design, which seems to raise the bore line somewhat. The recoil seemed to drive back up my arms, rather than flipping the muzzle sharply up.

With my medium-large hands, I opted to use the flat floorplate on the smaller magazine instead of the pinky extension. Only about half of my finger was not on the pistol. It did not seem uncomfortable or to affect the control of the pistol. The SR40c is a compact pistol, and I wanted to keep it as much that way as possible. The flat floorplate kept the height to 4.6 inches.

I felt sure I would never apply the diminutive thumb safety while wearing the SR40c, or any of the SR family, because swiping it off would be too iffy, even for a long time fan of the 1911. I gave it several tries, and found that I was able to manipulate the safety repeatedly. Then I poured the coal on, and found my ability dropped off. Use of the safety will be up to the enduser. It might be best left to those times when the pistol is off body.
I enjoyed working with the SR40c. It was pleasant shooting regardless of the load tested and I found follow-up shots easily placed where they needed to be. The sights seemed well registered for windage but shots impacted about 3 inches high. Luckily this pistol has adjustable sights! 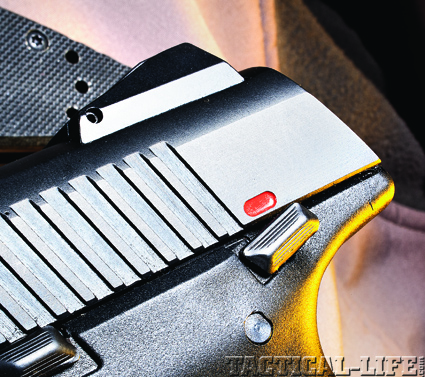 The ambidextrous safety features a downward sweep to disengage, revealing red markings on the slide to indicate the pistol’s condition. When the Ruger SR40c’s safety is engaged, white dots on the frame are exposed and the slide is tightly locked into position. 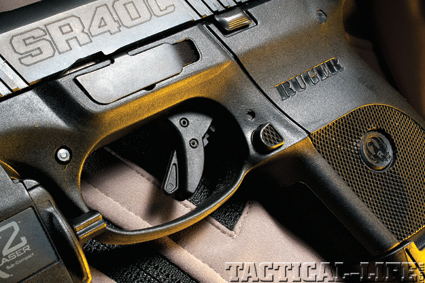 The trigger of the Ruger SR40c, housed within its rounded triggerguard, features a pivoting safety lever located in its central face.

The trigger, weighing in at 6.75 pounds, was very useable. Take-up/slack was minimal but the trigger pull was a little long and a bit crunchy with some stacking, but had virtually no overtravel. Reset was positive; that’s a good thing! I was able to pick up a fair amount of speed relatively quickly.

I suspect anyone who devotes a reasonable amount of time and effort to the SR40c, or any other member of the SR family, will easily develop the muscle memory to utilize the pistol’s fight-stopping performance and accuracy. Quick, precise, accuracy to insure no time is wasted. After all, to quote noted trainer Tom Givens, time is the critical element in a gunfight and is wasted by misses.

If there are any misses, they should not be attributable to the SR40c. The SR40c showed ammunition preferences, as most firearms do, but it handled all loads well, providing combat accuracy. Of the seven high-performance .40 S&W loads I tested at 15 yards, the largest five-shot group measured a still respectable 2.90 inches. In fact, averaging all the average groups from the loads tested gives 2.26 inches. Quite acceptable!

While I worked at the range with the Ruger I wore the new DeSantis SOF-TUK holster. A combination IWB/Tuckable holster built of suede leather with a reinforced mouth, the SOF-TUK was comfortable to wear, but popped the Ruger out quickly! The polymer belt hook is easily adjusted for cant, allowing the wearer to position it where they desire.

When choosing a weapon light for smaller pistols, the user does not have to look far for a good choice. I slipped Insight’s lightweight, 80-lumen X2 LED on the SR40c’s rail with no problems. The patented Slide-Lock interface worked slickly, allowing me to make the fit snug.

Final Thoughts
Let’s face a cold hard truth—few gun-toters are carrying a full-size pistol. In fact, few are carrying compacts in the Commander/G19 range. Most opt for sub-compacts or pocket pistols, with the former offering greater firepower as a primary weapon. The SR40c falls into the sub-compact range, and unlike some sub-compacts does deliver the performance of the larger compact.

I could find only two things to complain about with the SR40c: I’d like to see the slide’s striker status indicator extended enough for tactile checking when cocked and I have no use for magazine safeties. Neither would prevent my using or recommending the pistol.

Actually, there is nothing that would prevent my recommending the Ruger SR40c. Reliable, accurate, controllable and packing .40 S&W power, the SR40c is another hit from Ruger. And a hit from Ruger is a good thing for everyone!