Dennis Reichard retired in 2010 after three-dozen years full-time as a street cop and detective in the Hoosier state. He had been tuning Smith & Wesson revolvers for friends and brother officers right along. Retirement now allows him to work full-time at the bench on S&Ws, and connoisseurs of double-action revolvers are better for it.

I came to know Denny on the pro shooting tour in the early 1980s. Most others were drawing from super-fast speed rigs and using .38s, 9mms, or .45s loaded soft at the lower edge of a not-very-high power factor. Reichard was shooting a Smith & Wesson Model 29 .44 Mag with a pretty stout load, out of a police duty holster. I learned it was the same gun he carried on duty as a cop in Rochester, Indiana. 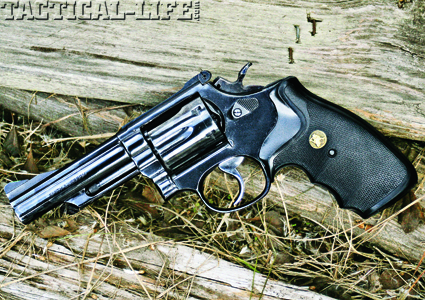 The 19-4 after the Sand Burr work and retrofitted with Pachmayr grips.

I ran across him again when I taught at Jim Reinholt’s shooting park in Winamac. Reichard was there as a range officer. I was impressed with how quickly he picked up on the concepts, not just the shooting side but the teaching side as well. Time went on, and I had him guest teach. Denny had developed a good ol’ country boy persona, in part I think to camouflage from suspects the fact that he had one of the keenest deductive minds I’d ever run across, generously leavened with common sense. He didn’t just parrot what he’d learned—he understood it, and had a gift for explaining it to others. It wasn’t long before I made him a full instructor at Lethal Force Institute, and I still teach with him yearly at his own shooting park, Sand Burr Gun Ranch.