Cowboy action shooting is a gun game where competitors dress in Old West garb and shoot steel targets with single-action revolvers, lever-action rifles and period-correct shotguns; all under the pressure of a ticking clock. The Single Action Shooting Society, better known as SASS, is the largest cowboy action shooting organization in the country. In support of the group and its members, the E.M.F. Company recently unveiled their SASS “Off Duty” Double Action Revolver (DAO).

Gun Details
You might wonder why an organization dedicated to cowboy-era guns would offer a modern double action revolver to its members. Even though SASS members like to play and compete in a recreation of the 19th century, they have to live in the 21st century. And, even though Colt single-action army revolvers can stop bad guys just as capably today as they could in 1880, nobody would claim that those big horse pistols are a good choice for concealed carry in today’s society. The SASS DAO revolver allows SASS members to have a modern self-defense sidearm that also lets them show their pride of membership in SASS.

The SASS revolver is made by Charter Arms. It is the company’s well-known model in a fancy dress. The E.M.F. Company of Santa Ana, California is the exclusive distributor of the SASS Off Duty DAO. This is a 5-shot, 2-inch barreled revolver with a fully shrouded hammer. The gun can be carried in a pocket and drawn snag-free thanks to the enclosed hammer. 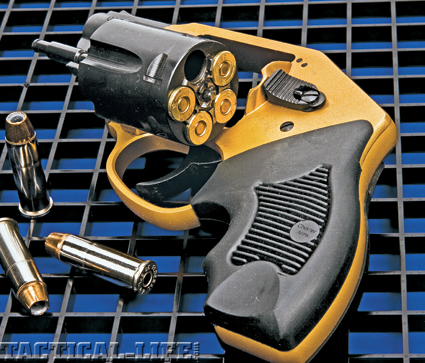 The five-shot SASS Off Duty preformed well with an assortment of .38 Spl. ammunition.