The alarm went off at 3:45 A.M. and I rose to wash my face, get dressed and loaded up my gear. I walked out of our apartment, two blocks west of downtown to a muggy May morning. I was going to be wade fishing and had put on some cargo shorts and a thin maroon t-shirt. The set-up was not much for concealing my handgun, which I had initially planned on leaving at home.

This was only about a month after receiving my carry permit and I think the events that took place this particular morning went on to solidify my stance on carrying with poise, purpose and perseverance. Too many people go through the time consuming and expensive process of becoming legal to carry, and then they become complacent with their safety.

After loading my rods and pack I reached for the door handle to my truck and then decided I could always slip my holster and gun into my shorts for the short ride. I went back inside the house, unknown to my wife who was trying to regain control of our Dachshund, and positioned my .45 ACP pistol slightly behind my right hip. I thank God everyday that I made that 2-minute delay.

As I turned the corner leaving our apartment the fuel light came on. I didn’t think much of it and made my way to the gas station about four blocks away. This station is only six blocks from downtown and is a known hangout for the homeless and unemployed. However, my wife and I had come to know the regulars and felt comfortable enough being around them and would even talk to a few.

We considered it a ministry opportunity and we would do our best to help them out with clothes, shoes or food coupons. As I was turning into the gas station I noticed two people I had never seen before walking towards the direction I was coming from. They were obviously chemically altered and the thought entered my mind that two “stoners” walking around at 4:15 A.M. probably weren’t up to any good. This thought was confirmed as they made an about face and headed back to the station. I pulled into the farthest, most well lit pump and waved to the attendant to let him know I was there and started pumping.

I stand about 6 feet tall and carry 215 pounds on an athletic frame, not your typical target. At least so I thought. As I was pumping gas I put my back to my vehicle. I was facing the pump and noticed movement out of my left eye. I saw one of the men heading my way looking straight at me. I made a firm wave motion with my left hand and said “No thanks.”

At this moment the man became jumpy and started to play with his hair and face, all while continuing his path towards me. At this point I knew he was not the typical beggar we were used to dealing with. I took my right hand and lifted my shirt and grasped the grip of the pistol and very forcefully told him “NO!” Although he couldn’t see my gun, he knew something wasn’t right and he quickly turned his back while making a waving motion with his hand as if trying to communicate with someone else.

I moved three feet to my right to where I could see completely around the pump and spotted his friend staring at me from behind the corner of the store, about 45 feet away. This man, however, could see my hand and what was in it. They both took off quicker than they got there.

The moral of the story is to carry and carry with purpose. I almost left my gun at home, and while I didn’t have to use it, its mere presence helped sway the odds in my direction. If you are going to carry at all, you might as well carry as frequently as possible. 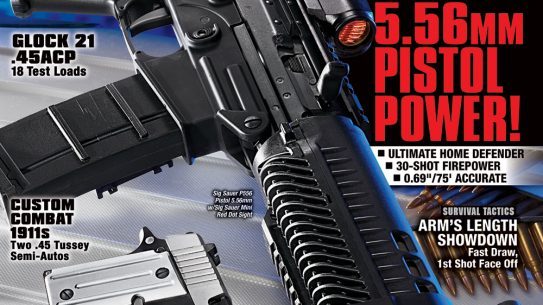