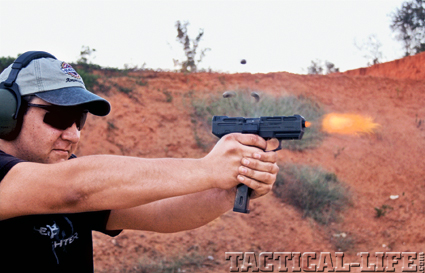 The Maxsell M925 produces not only noise, but also a muzzle signature that further adds to the realism.

While I don’t claim to be an expert on select-fire handguns, I have had quite a bit of experience with them through my work. Although several are based upon traditional semi-auto pistol platforms, it is important to remember that, as these pistols are select-fire, they obviously are not legal for civilian purchase under normal circumstances here in the United States. Also, attaching a stock to a handgun with less than a 16-inch barrel violates firearms laws here in this country. 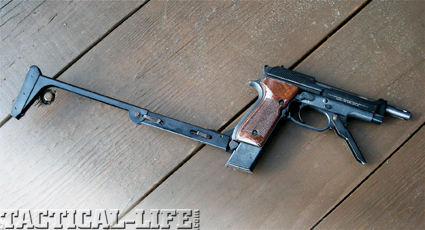 The Beretta 93R with a stock affixed and a folding foregrip lowered, as used by Italian special police units.

Those who like machine pistols argue that they can put a lot rounds downrange rapidly in the effort to break an ambush or concerted attack. On the other hand, they are hard to control without a stock and just as hard to conceal with one. Although machine pistols normally take high-capacity magazines, they still run out of ammunition very quickly. I’ve done tests over the years using the machine pistol in different scenarios—vehicle counter-ambush, AOP (Attack on Principal) drills, etc.—to see how effectively it performed. Although they admittedly do put out a lot of firepower, I discovered that they can be difficult to employ effectively in some cases.

Machine Pistol Perspective
For years, the Glock 18 has been one of the few machine pistols readily available. One of its major advantages is that it looks like a standard Glock 17, except for the small selector switch on the slide. This allows it to be carried in standard Glock holsters and not attract attention to the fact the operator is carrying a machine pistol.

Meanwhile the Glock 18 requires a lot of training. As issued, it does not have a stock, although aftermarket stocks are available for those who can legally install them. But without a stock, it is necessary to grip the pistol firmly and lean into it when firing on full-auto. Trigger control is important to keep bursts to 3 to 4 rounds. A nice thing about the Glock is that the polymer frame absorbs some of the recoil and muzzle jump so it can be shot effectively. Firing in bursts, I’ve kept an entire 33-round magazine on a silhouette target at 10 yards. For normal carry, however, the 33-round magazine protrudes much too far; hence, a 17- or 19-round magazine will likely be in place if trouble is encountered. 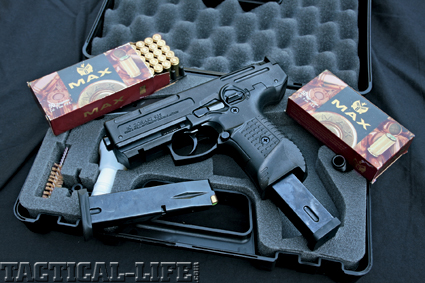 Want a machine pistol for your own? Then take a look at the Maxsell Model 925, a select-fire, blank-firing 9mm machine pistol. The M925 is unique in that it is “front firing,” which means the barrel is vented to allow the flame to escape out of the muzzle and give a more realistic appearance to the gun.

The M925 is a 100-percent “Non-gun.” It cannot be made to chamber or fire live ammunition. As such, no special paperwork is required to purchase the unit. The only requirement is that the purchaser be over 18 years of age.

Details
Essentially, the M925 appears to be a large/oversized pistol. The gun is fed via 15- or 25-round magazines up through the pistol grip. A selector lever is located on the left side of the frame and offers safe, semi-auto and full-auto settings. For fodder, the M925 uses “9mmPA” blank ammunition—a high-quality centerfire cartridge with brass case. A rubber/polymer plug holds the powder in the case but does not exit the cartridge when fired. This green rubber cap has pre-scored “x.” The noise generating gas escapes out of this opening. Best of all, this blank ammunition is loud.

Blank guns and starter pistols have been available for decades and the original models were pretty anemic. The 9mmPA blanks speak with authority. As a military instructor and veteran, I can tell you that a pistol shooting 9mmPA blanks is louder than an M16A2 with a BFA (blank firing adapter). 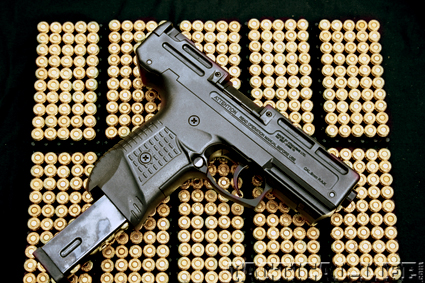 Do yourself a favor. When you purchase the M925 order plenty of 9mmPA blank ammo.

Applications
Do full-auto blank firing guns have a practical application? Gunfire noise adds realism to training that amps up students/trainees and gets their adrenaline flowing—full-auto gunfire noise only magnifies that feeling. Blank fire scenario training is predominant in the military world but it has applications in private training as well. The secret to effective stress-induced training is to get the student as close to reality as possible while maintaining a controlled environment.

Dedicated, blank-firing arms that cannot be loaded with live ammunition can serve a vital role in maintaining effective controls and safety protocols. Also, let’s be honest. These types of arms can be just-plain fun, offering the opportunity to replicate the excitement of firing a true machine pistol! Find out more by visiting maxsell.com or 877-332-2343. 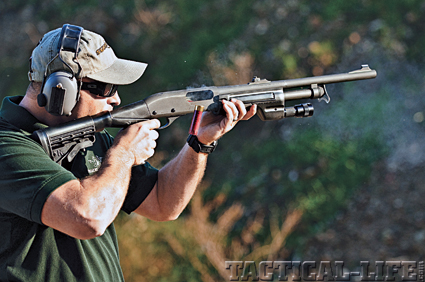