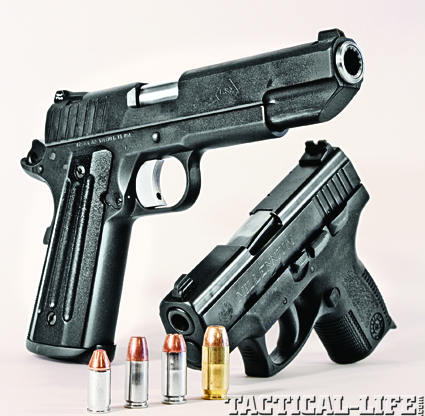 Defensive handguns come in all sizes and shapes. Just like their ammunition, they offer varying levels of performance.

Just because a bullet is new, has a wicked sounding name or is touted as best by some gun guy who thinks he’s the next Jeff Cooper, it doesn’t mean it’s magic or that it can circumvent the laws of physics. There are two aspects of terminal bullet performance that matter—the depth of the hole and the size of the hole. Just the same, there are two extremes when it comes to terminal bullet performance; bullets that drive deep and make narrow holes and bullets that make wide holes with shallow penetration. Obviously, most bullets fall somewhere in between these extremes.

Levels Of Performance
The depth a bullet penetrates is dictated by the percentage of weight it retains, the frontal diameter of the expanded bullet and the bullet’s impact velocity. There are no secret forces at work here—just physics. If you know these things you can predict how deep a bullet will penetrate in a consistent test media.

If you select a bullet or ammunition that will always produce more than enough penetration then that bullet will retain most if not all of its weight, show moderate expansion and create narrow wound cavities. Bullets like these perform consistently and do very well in the FBI’s tests. Examples would be the Winchester PDX1, Remington’s Golden Saber, Speer Gold Dot and Federal’s EFMJ (Expanding Full Metal Jacket).

If you select a bullet that expands violently and sheds a great deal of weight, it will make a wicked wound cavity and destroy a tremendous amount of tissue but the wound will likely be shallow. These types of bullets typically do not do well against intermediate barriers but they do limit over-penetration concerns. Some examples would be the Glaser and MagSafe frangible loads and the Extreme Shock Air Freedom Round.

Conventional hollow-point bullets generally offer penetration and wound cavities somewhere in between these extremes. Some do well against some barriers and others not so much. In this category you will also find some of the self-defense specific ammunitions developed for shooting bad guys but not intended to defeat substantial barriers like law enforcement ammunition is designed to do. This mid-range performance level contains loads with a simple JHP designation, as well as the newer Hornady Critical Defense and Grizzly Xtreme loads.

Simply stated, what you have are three levels of performance based on penetration; shallow, moderate and deep. You must make your selection based on which type performance you feel will best suit your needs and maybe your handgun/cartridge of choice.

Situations
If you intend for a particular handgun to be used as an in-home defensive weapon and you live with children or in an apartment complex, over-penetration is a serious concern. In these instances the shallow penetrating loads make sense because they substantially reduce the possibility a bullet will injure someone in the next room or apartment.

On the other hand, if you expect to be shooting it out with bad guys that hide behind walls, car doors or refrigerators, a deeper penetrating bullet is a better choice. But here’s the kicker; due to the stringent barrier defeating requirements specified by the FBI, they have gravitated to bullets that seem to work better on barriers than bad guys—they drive deep but make small holes. Bear in mind, the FBI is not the last word in defensive handgun ammunition. Other agencies use other criteria and testing methods when selecting handgun ammunition. Because of the legitimacy and clout the FBI acronym brings to anything, many are rightly or wrongly convinced the FBI’s methodology is the best approach.

That said, what if a bad guy who, invades your house, is wearing thick, heavy clothing or ends up hiding behind the couch while he tries to shoot it out with you? In that instance, shallow penetrating bullets—those that only penetrate about 6 inches in 10% ordnance gelatin—may prove insufficient.

Selecting A Load
So what’s the answer? Well, it depends, at least as far as armed civilians are concerned. Selecting a load for your defensive handgun is no different than selecting anything else. With defensive handgun bullets, just like in life, everything is a compromise. If you’re in the market for a new pickup you have to decide what your primary needs are. Do you want four-wheel-drive, good gas mileage, a plush interior, a large cargo bed or four full-size doors? Do you plan to pull a 30-foot camper or nothing at all? It would be nice to have one truck or defensive handgun load that does everything perfectly but that’s not an option.

One approach that is rarely considered is loading your defensive handgun with a mix of ammunition. This has long been a routine approach by those that hunt dangerous game. Often they will load one or two expanding bullets as the first rounds to be fired, followed by solids. This gives them two levels of terminal performance, offering both maximum tissue destruction and penetration with several successive shots.

Defensive handgunners can do the same thing if they think that is a viable approach and arguments to support this methodology can be made. For example, your first couple shots in a defensive encounter are likely to be at close range with no intermediate barrier between you and the bad guy other than his clothing. If these don’t stop the fight, it’s possible they’ve failed to achieve sufficient penetration. It’s also possible your assailant might seek cover or concealment and continue the fight after those first few rounds have been fired. In an instance like this, a couple shallow or moderate penetrating bullets followed by more rugged loads capable of defeating intermediate barriers could make sense.

Reliability
This of course leads us to another consideration, which is even more important than terminal performance and that’s reliability. Ammunition or a mix of ammunition that won’t reliably cycle your handgun is about as useful as a shovel without a handle. Regardless of which ammunition you select, you should make every effort to insure that it will feed, fire and eject in your handgun—every time, all the time and in every conceivable situation.

The subject of reliability always reminds me of a shooting I responded to when I was working the street. When I arrived, one of the participants was on the ground with a 9mm hole punched between his nipples. Beside him on the ground was his pistol with a stovepipe jam. The wounded gang-banger died from a single round of 9mm hardball before EMS arrived about a minute later. Might he have been able to avoid this and stay in the fight if his pistol had not jammed?

Verifying reliability is more expensive than difficult. After you determine one or more loads that best suit your needs, buy at least 50 rounds—twice that or more is better—and actually test-fire the ammo. Testing should include strong, weak and both hand drills, as well as shooting from unconventional positions where you may not hold a handgun the same way you would during conventional recreational shooting. Look at it as an opportunity to practice. After all, you probably need it and in the big scheme of things, hitting the bad guy first and in the right spot is probably more important than the ammo you choose anyway.

Final Notes
There are as many books, opinions and test protocols to help you select your carry ammo as there are different loads to choose from. Few if any of those that claim to be experts agree on hardly anything when it comes to the best type of terminal performance. One thing they all agree on is shot placement; bad hits equal bad results. No matter the ammo you choose, shoot first, shoot accurately and shoot until the threat no longer exists.

As an armed civilian, I tend to rely on high-velocity, light for caliber loads that offer middle of the road terminal performance. In other words, they penetrate between 8 and 11 inches in ordnance gelatin and produce wide wound cavities. Actual street results seem to support the idea this is enough penetration. So far, they’ve worked fine on a couple feral critters, rattlesnakes and an injured deer struck by another motorist. I pray that’s all they will ever be called to do. Your needs and mileage may vary. 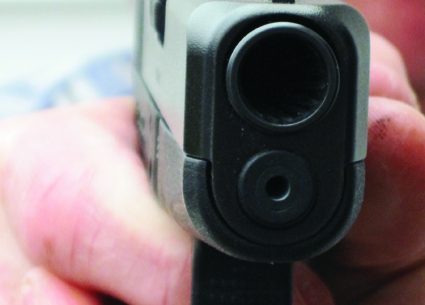 Defensive handguns come in all sizes and shapes. Just like their ammunition, they offer…