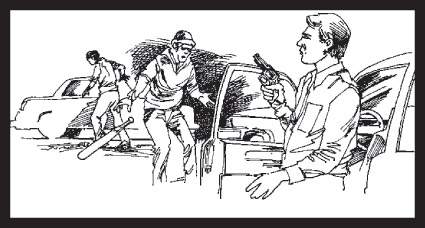 In my teenage years I used to camp quite regularly. I almost always had my camping gear in my truck on the passenger side of the bench seat. I had my standard gear for camping that consisted of a sleeping bag, canned food, etc… and my favorite fixed blade camp knife. My friends and I were all hunters and fishermen, and we often held friendly shooting matches with our pellet guns while camping. I had a Crossman pellet revolver that was in my pack as well. Luckily I had all my gear late one night.

While in high school I earned money for my hobbies and saved for college by working at a fast food place in a nearby town. I usually worked late, especially on Friday nights, and this night was no exception. After finishing my shift for the night at 2:30AM, I decided to take a shortcut on a back road to my parent’s house in the country. While driving home on an uninhabited stretch of road I noticed a car swerving back and forth into the oncoming lane in front of me. I guessed the driver was drunk. I slowed down and kept my distance. Then suddenly the car turned sideways and blocked the road. A few months earlier, two men were attacked by a group of men who used their car to block the narrow road ahead of them. The two men were beaten badly but both survived and the “beaters” were arrested, tried, and jailed for their crime so I had nothing to worry about, right? Wrong!
Before I could even think about turning around and avoiding the deep ditches that flanked the road, two men were already charging my truck and worse yet, I had stalled my truck while trying to turn around and get out of there. It was summer and I had my window down and I never thought to close it. My father had always taught me that if I am attacked and can’t get away, to fight as hard as I can and “get my shots in.” Easier said than done because one of the men had a bat or some sort of club, I was going to get stomped. For some reason I felt a flood of anger and I was going to fight for my life, I was not going to be beaten to death on the side of the road! Thinking quickly, I grabbed my knife and pellet gun which was unloaded and would make a good club, both of which were rolled in my sleeping bag strapped to my pack. The larger club wielding man got about five feet from my door when I raised my pellet gun to the man’s head. Much to my surprise, the man dropped the club, screamed, “He’s got a gun!” turned and ran toward the car he got out, falling to the ground halfway there. The occupants of the car saddled up and took off into the night.
I started the truck, turned around and got out of there quickly. I took the long way home that night. This happened before cell phones worked in that part of the world so I did not call the police, I just went home. I don’t know what would have happened had I not done what I did. That pellet gun probably saved my life. I did not take that shortcut home for a long time.
—RG, OH 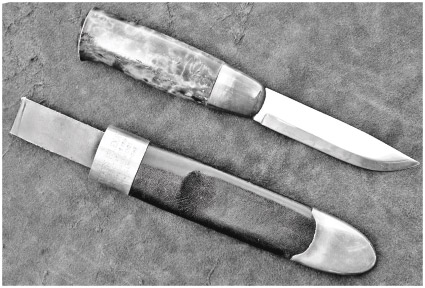 Here’s a beautifully made Norwegian knife that pays tribute to the general who built...