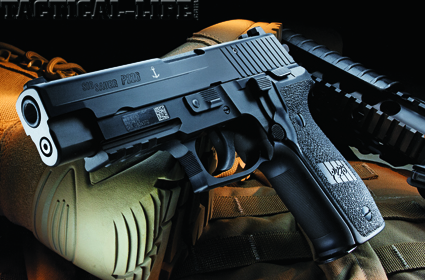 A purebred performance pistol, the Sig Sauer MK25 9mm is essentially a specialized version of the P226. A testament to its impressive capabilities, the U.S. Navy SEALs have taken on the MK25 as their own sidearm of choice.

The Sig Sauer P226 ranks as one of the most popular pistols among military, police and civilians. Introduced to the U.S. market in the early 1980’s, the full-size P226 has been the Navy SEALs’ official 9mm pistol since about 1987. Popular with police, the P226 is one of three issue handguns for the NYPD, while the Secret Service uses the compact version, the P229. Sig Sauer recently renamed the P226 Navy the “MK25,” to match the Navy’s new internal designation for the pistol. The MK25 is identical to the P226 issued to Navy SEALs and comes with a special certificate.

Though the MK25 has obvious collector appeal, it’s a purebred performance pistol designed for professional combatants. An earlier version of the P226, then made in West Germany, was among five contestants in the U.S. military’s 1985 trials for a sidearm to replace the 1911. The P226 and Beretta 92F were the only entrants to finish the test. Beretta won the contract, but the SEALs adopted the P226 soon after. 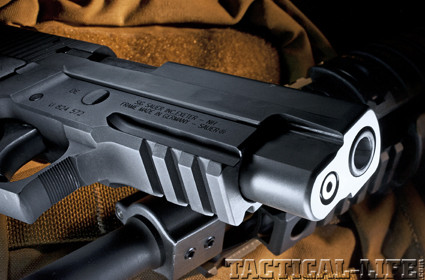 The MK25 is a full-size pistol that uses the modified Browning locked-breach design: during recoil, the barrel and slide lock together for about 0.12 inches of travel before the lug extending below the breechblock arrests the barrel’s rearward movement and tilts it downward and out of engagement with the slide, which continues rearward. It’s a reliable, straightforward system that requires simpler manufacture and fitting, as well as much less lubrication than the 1911’s swinging-link design. Many manufacturers use this “tilting-block” system. Sig Sauer uses it on nearly its entire line, including subcompacts like the P238 and P290. 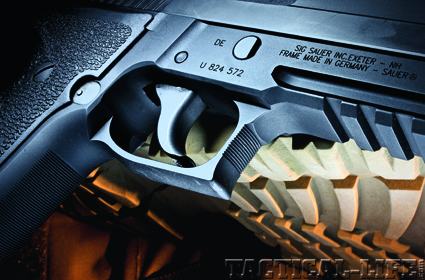 The Naval Special Warfare Group prefers the DA/SA trigger, allowing the pistol to be carried with the chamber loaded and ready for immediate action.

The MK25’s traditional construction starts with a one-piece aluminum alloy for the frame and a stainless slide and carbon steel barrel. The stainless steel slide assembly and frame are Nitron-finished for corrosion resistance. The only plastic parts are the two-piece grips and the mainspring stop. The basic P226 design is a proven one, but some improvements have been made: In 1996, the welded carbon steel slide was replaced with a one-piece milled stainless steel slide, and the internal extractor was replaced with an external unit; later years, a Picatinny rail was added. The MK25’s rail is made to MIL-STD-1913 specifications.

The MK25 is a double-action/single-action pistol with a decocker and no manual safety. Sources explain this was the Naval Special Warfare Group’s (NSWG) preference for all pistols issued to SEALs. The MK25 can be carried with a loaded chamber in a proper holster with the hammer decocked. The chamber can be loaded (condition one) because the firing pin is prevented from moving forward and striking the primer unless the trigger is pressed. Pistols with DA/SA pistols do require finer marksmanship skills than SA pistols because the DA trigger pull is much longer and heavier. While this applies to the MK25’s initial shot, the gun’s trigger comes with Sig Sauer’s short reset mechanism, which allows the sear to engage the trigger after it has been released only a short way. The short reset trigger allows for more rapid and accurate followup shots with less movement of the shooter’s finger. 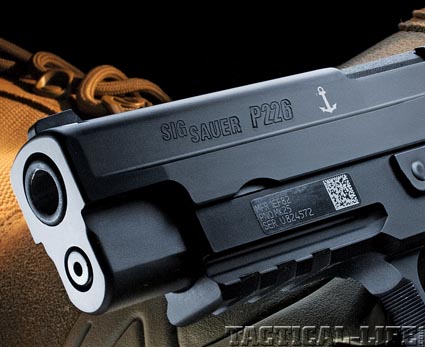 The MK25 has features that the standard P226 does not, including a laser-engraved anchor on the slide and several upgrades to improve resistance to saltwater corrosion. These include a chrome-lined, nickel-plated, phosphate-finished barrel, phosphate-finished magazines and all–carbon steel internal parts (except springs) including the decocker, mag release, locking insert, ejector, recoil-spring guide rod (typically plastic on some P226s) and slide lock. Some of these parts are hard to fully clean with a fieldstrip, so a more durable finish matters. The MK25 also comes with three, 15-round steel magazines. All Sig Sauer P226 pistols offer very good ergonomics: the grip is curved and hand-fitted, and the controls are easy to access. Though the MK25 has right-hand controls, the design allows left-handed manipulation. To decock, slide your trigger finger to the decocker and activate it. This may require a slight adjustment of grip, but decocking is usually done before re-holstering and not during the fight, so losing an ideal firing grip is of little consequence. To chamber a round by releasing the slide, simply pull back and release the slide with your support hand. Releasing the magazine is easy using your trigger finger and is reversible to the right side.

The barrel has traditional land-and-groove rifling, which allows you to shoot inexpensive lead bullets—polygonal rifling does not. With polygonal rifling, lead accumulates just ahead of the chamber and can cause an unsafe increase in chamber pressure. The MK25’s manual does not prohibit the use of +P ammunition, provided it meets SAAMI or military specifications. Sig Sauer equips some of the MK25s headed to NSWG with threaded barrels for suppressors. The SigLite Night sights are in the three-dot design with a white circle surrounding the tritium-filled vials. Windage adjustment is done by drifting the front or rear sights in their dovetails. More importantly, the rear sight has a square forward edge designed to facilitate a one-handed slide rack by catching it on a belt buckle or holster. While a seemingly minor point, this feature is essential if you get incapacitated and need to clear a stoppage or misfire with one hand.

Accuracy testing was conducted using a Caldwell rest and was very good with the Black Hills 124-grain JHP +P load, which averaged 2.65-inch groups. The Winchester loads yielded much larger groups of 3.35 and 3.75 inches, which are still considered acceptable by many for combat pistol accuracy. Two easy ways to improve the accuracy of the MK25 would be to smooth the trigger pull and change the sights to those without white outlines around the tritium inserts, or to blacken the rear sights so that the front sight is more distinctive. Three-dot sights that are outlined with white paint are often distracting to the eye and can give an imprecise sight picture in my opinion.

The MK25 functioned perfectly with three different loads, two of which had hollow-point bullets. It is controllable with one hand and the short reset trigger delivers accurate accelerated pairs. My test pistol has a DA/SA trigger pull of 11.8 and 4.5 pounds respectively, measured using a Lyman electronic trigger-pull gauge. Though the DA trigger weight is high, it is smooth. The SA trigger pull has only minor creep and no discernible overtravel. 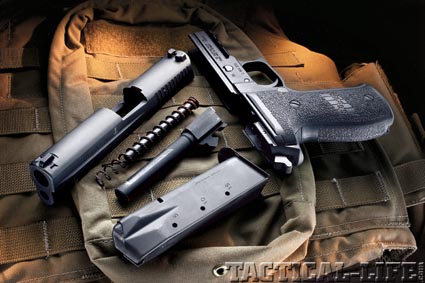 The Sig Sauer MK25’s components are Nitron-finished, which makes for easier cleaning in the field.

The MK25 is a combat pistol, so any amount of range time should include drawing from a holster and firing double-action with transitions to single action. I selected the BlackHawk (800-694-5263; blackhawk.com) Level 2 Tactical SERPA holster recently chosen by the Marines and likely used by SEALs to carry their MK25s. This holster is a drop-leg system that secures to the belt with two straps and to your thigh with a rubberized, nonslip leg band. The BlackHawk duty design fully protects the slide and sights and can be quickly detached from the flexible thigh platform and mounted elsewhere. This helps when changing from vehicles, enabling the pistol to be chest-mounted on a MOLLE attachment or thigh-mounted for going afoot.

Firing the MK25 double-action with a one-hand grip requires a very good fit of the shooter’s hand to the pistol, so that the trigger stroke goes straight to the rear. I own several P226 pistols, but because the plastic grips on the MK25 are slightly larger than on my other P226 pistols, I had to adopt a slightly different grip in order to make quick and accurate one-handed shots. This was not helped by the MK25’s smooth trigger shoe—older P226 pistols have grooved triggers that generally give me better control. Though a fair amount of dry practice is necessary to get an ideal DA trigger pull with one-handed shooting, transitioning to SA fire is easy with the MK25. Moreover, investing in a trigger tuning job from Sig Sauer’s custom shop or from Sig Sauer specialist TJ’s Custom Guns (tjscustomgunworks.com) will help significantly.

The MK25 is among the most practical and durable pistols of any on the market and an upgrade to other P226 pistols in Sig Sauer’s line. A proven design that reasonably allows ambidextrous manipulation, the only things I would change would be the sights, a slimmer grip and trigger job to make accurate, one-handed DA fire easier.