The flagship of Sig Sauer’s high quality DA (double-action) centerfire pistols line-up is the large framed P220, which has been produced and imported into the US since the 1970s. But the Swiss-German Sig Sauer conglomerate continues to move ahead with refining older models and introducing new ones. The now classic .45 ACP pistol that opened the doors for the company in the US over 30 years ago has not been ignored with 14 different configurations of the full-sized P220. The platform is dependable, and with options such as different triggers, finishes, sights, grips, frames and barrels; it’s easy to find a P220 configuration that fits for work or play. One of the more interesting variations is the P220 Combat. For those that like the original P220 concept of a reliable large framed .45 ACP, take a look at this one. 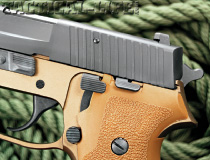 Gun Details
The standard basic “blued” P220 is produced from a mix of German and US made parts in the Sig Sauer facility, features a hard anodized alloy frame with an integral accessory rail, a Nitron-coated slide milled from stainless steel barstock, three-dot white paint fixed sights, black plastic pebble-grained wraparound grip panels, 8-shot magazine with a bumper pad, standard full-length DA/SA trigger, rebounding hammer “safety,” internal automatic firing pin block, external decocking lever, frame-mounted takedown lever, conventional left-side magazine button, and the new external extractor phased in during the past year or so. That’s the core pistol that all other P220 models are based on, and the Sig Sauer P220 Combat takes it up a notch.

The P220 is a rugged pistol to begin with. It’s worked the streets in uniform and plainclothes for over three decades in all sorts of weather and other harsh environments. The only major complaints have been magazines that occasionally cracked at the top rear (corrected long ago), an occasional extractor glitch, and a tendency to rust on the older carbon steel slides, which is no longer a factor with the current stainless slides.