0
SHARES
202
VIEWS
Share on FacebookShare on Twitter
The new Sig Sauer P224 is a scaled down version of the P229 and features a double-column mag. It will initially be offered in .40, followed by 9mm and .357 SIG variants.

Sig Sauer has been on the firearms scene since the 1860’s when they first produced rifles for the Swiss Army. In the 1970’s they combined with J.P. Sauer & Sohn, then in 1985 came to the United States—in a big way. Since then Sig Sauer has been a major supplier of handguns and other firearms to the U.S. Government and military, plus state and local law enforcement agencies. The organization has been a tireless innovator in both weapons design and firearms training. It doesn’t seem as though a year goes by without Sig Sauer introducing a new firearm or variation of an existing model.

Gun Details
The P224 is a compact concealment-type handgun chambered for the popular .40 S&W cartridge, while later models will also be offered in 9mm and .357 SIG. It is Sig Sauer’s first sub-compact Classic series variant that accommodates a double-column magazine. Even with a very short grip frame, it has a 10+1 ammunition capacity in .40. The magazine included has no finger rest on the baseplate, so you must curl the little finger beneath the grip when firing. To help you maintain a solid hold, the G10 grip panels have a honeycomb-style knurling on the sides and rear, plus the frontstrap is finely checkered. The “upper” and forward portion of the frame greatly resembles the Sig Sauer P229—with its 3.9-inch barrel and 7.1-inch overall length—the P224 has a 3.5-inch barrel and 6.7-inch overall length; essentially making it a cut-down P229. Like the P229 DAK it has the double-action-only (DOA) trigger with an exposed, spurless hammer. The DAK system offers a consistent 6.5-pound trigger pull, with second-strike capability. As it is a DAO model, there is no external safety and no magazine safety. Internal safeties include an automatic firing pin lock, safety intercept notch, and trigger bar disconnect. 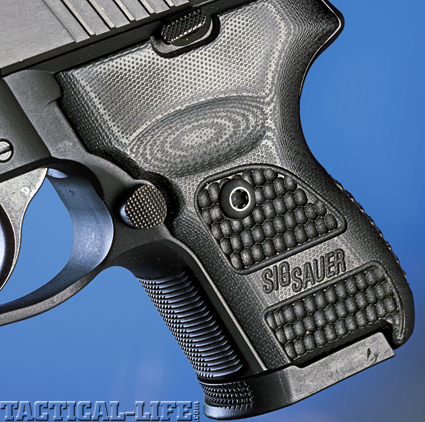 Sig Sauer’s P224 has a honeycomb pattern in the grip panels and the rear portion of the grip that works with the checkering on the frontstrap to allow excellent control.

The only visible controls are on the left side of the pistol and consist of the magazine release, slide stop catch and takedown lever. A traditional double-action/single-action (DA/SA) trigger will be offered on the P224, in later versions. 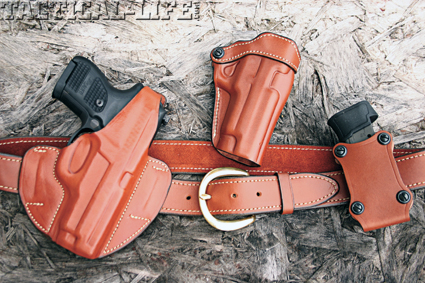 Another common feature the P224 has with the P229 is the fixed sights that are dovetailed into the slide fore and aft, allowing lateral adjustment. The sights on my test gun were tritium (SigLite) night sights that are of the three-dot configuration. They glow green in the dark and look like white-dot sights in the daylight. Something absent on the P224 is the Picatinny rail found on the frame of the P229’s dustcover—the feeling there being that a pistol of this size probably would not need an accessory rail. Another thing you won’t see is a finger hook or even checkering on the front of the triggerguard; on the P224 it is rounded and smooth.

It is generally accepted that the butt portion of the handgun is the hardest part to conceal; especially if the weapon is worn on the strong-side hip as a lot of users are prone to do. The jutting butt “prints” under clothing. The butt of the P224 is designed to prevent this sort of thing. From the base of the magazine to the juncture of the frame/slide, it measures only 3.5 inches, and adding the slide the overall height is still just 4.5 inches. Compare that to the classic P220 at 5.5 inches in overall height. Even an inch can make a big difference, especially if you have an extended magazine baseplate with a finger rest or pad. The ultra-thin G10 grip panels on the P224 also cut down on the pistol’s width to 1.3 inches, which is almost 0.25 inches less than a P226 or P229. Weight on the P224 is listed at 25.4 ounces with an empty magazine. 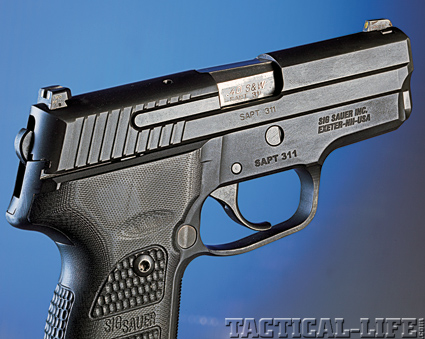 The P224 is a double-action-only pistol with the Sig Sauer DAK trigger system and has an exposed spurless hammer.

It goes without saying that fit and finish on my test gun (considering it was a pre-production sample) was just what you’d expect from Sig Sauer—superlative; at least for what you might term a “black” handgun. There’s no polished blue or nickel nor fancy-grained walnut grips, the steel slide has a no-nonsense Nitron finish, the aluminum frame is black hard anodized, and the grips, trigger, barrel, and every exposed part is a non-reflective matte black color. I could find no external blemishes or machine marks and stamping or roll-engraving on the exterior is kept to a tasteful minimum. Takedown for cleaning and routine maintenance is standard regulation Sig Sauer, and the pistol comes in a nice polymer fold-top case with a padded interior and the usual trigger lock and extra magazine. Speaking of magazines, the P224 will work just fine with P229 magazines and I used an extended version during my gun test.

As the P224 is a “chopped” P229, holsters for the P229 will work for the P224. For my T&E I wanted some concealment leather and decided to use a rig from Hunter. This outfit has always been known for affordable holsters, belts and other leather products for the shooter and sportsman, but recently they introduced a line called Pro-Hide. These holsters and accessories are intended for the concealed carry crowd and from what I saw on the website, they looked pretty good. I put in my order and when the gear arrived, it looked as good as it did in the pictures! I received two holsters, a Model 5314, which is a hi-ride, pancake style with two hidden belt slots (for a cleaner appearance) and a thumb-break safety snap. The other holster was a Model 5212, a hi-ride open-top holster that is reinforced at the top and has and tension-adjustment screw to aid in handgun retention. Both of the holsters are expertly hand boned to the exact shape of the Sig Sauer P224 and have the looks and quality of the “big name” brands, but at a lower price. I also got a Model 5401 single magazine pouch and a Model 5802 plain, suede-lined gun belt.

My next task was to select some .40 S&W cartridges, so I dug through my ammunition locker for some appropriate loads. The Federal Premium Tactical Law Enforcement Ammunition with the HST bullet is one of my favorites and the version I selected has a 180-grain HST hollow-point bullet that features a deep, wide, HP cavity, with the jacket serrated at the bullet nose for reliable expansion. A new round that recently caught my attention is the Green Elite from International Cartridge Corp. They have a .40 load with a 125-grain frangible, non-lead HP that is perfect for both training and street carry. On the range it is toxin-free and on duty it fragments within the first 6 feet of penetration and the chucks then spiral outward penetrating anywhere from 11-14 inches providing awesome stopping power. 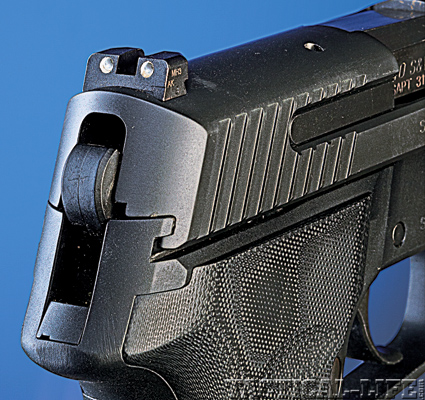 The rear sight of the P224 is also dovetailed and can be moved laterally for windage adjustments. Note the large external extractor.

Speer Law Enforcement Duty Ammunition is a mainstay with its Gold-Dot HP bullet. I chose the 180-grain load as I prefer heavy bullets in this caliber and the GDHP was one of my carry loads at one time. Last was the Winchester Supreme Elite PDX1 Personal Protection load with a 165-grain HP bullet. This cartridge is FBI issue and having seen it tested using the FBI protocol, its performance is impressive. 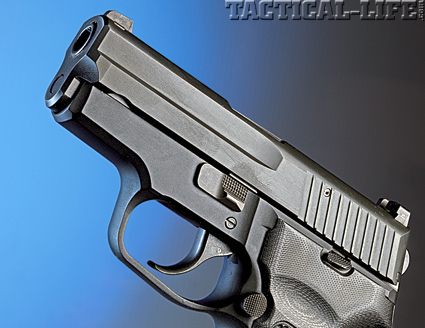 Based on the P229, the P224 takes the lightweight all-metal frame and puts it in a sub-compact package with all of the familiar controls and functions.

Range Time
With gun, gear and ammo in hand, I went out on a dismal day to do my evaluation at an outdoor range. With wind and rain threatening I did my chronographing, then as a warm up ran through a 30-round combat qualification course using the Speer Gold Dot ammo. I had previous strapped on the Hunter belt, Model 5314 pancake holster, and the magazine pouch. I put up a B-27 silhouette target on my portable target stand and starting at 3 yards I fired six shots strong-hand only and six support-hand only, then did a combat magazine change. I moved back to 7 yards and did a series of two double-taps, the two triple-taps and again changed magazines. At 15 yards, I fired behind the barricade; two standing left-side, two standing right-side and two kneeling right-side. All my shots stayed in the 9, 10 and X-ring, which would give me a perfect score. There were no malfunctions, I had no trouble controlling the P224 with its abbreviated grip frame, plus the sights were well regulated and easy to see. My Hunter leather gear worked just fine too; the holster allowed a smooth draw and the magazine pouch held the magazine firm, but I didn’t have to struggle to get it out. 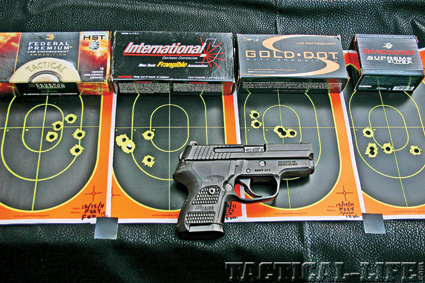 About the time I got done with this, the wind and rain hit and I headed to an indoor range to complete the practical accuracy testing. I ran some Caldwell Shooting Supplies 9-inch oval Orange Peel targets down to the 15-yard line and using a sandbag on the bench, fired three, five-shot groups through the Sig Sauer P224 using each of the four .40 S&W test loads. You can see the results in the table I prepared. The DAK trigger is good, but it’s still a DAO mechanism so you can’t expect the performance you’d get from a SA autoloader. That being said, my best group was 1.63 inches with the International Green Elite 125-grain Frangible HP loads. Second place went to the Federal 180-grain HST-HP load at 1.79 inches with the best overall group average going to the Speer 180-grain GDHP at 2.39 inches for the three, five-shot groups. Again I had no malfunctions and I’m satisfied that you should be able to hit what you’re shooting at with the Sig Sauer P224 at realistic distances.

Final Notes
I’ll admit to being impressed with the Sig Sauer P224. I believe it is right up there performance-wise with other full-bore, sub-compact autoloaders and offers a lot of firepower in a small package. The configuration of the gun butt enhances concealability, while the design of the grips and the checkering on the frontstrap allows the shooter to remain in control during rapid fire. For off-duty, plainclothes work, back-up or civilian self-defense, the P224 might be just what you are looking for.