0
SHARES
571
VIEWS
Share on FacebookShare on Twitter
The idea of a subcompact semi-auto chambered in the popular .380 ACP caliber is not exactly new, any more than the venerable .380 ACP cartridge itself. Small and medium frame semi-autos were first seen in this country in the early 1900s. Legendary American armsmaker John Moses Browning designed the original compact .380 semi-auto in 1908, three years after his Browning Model 1905-FN .25 ACP (6.35 caliber) Vest Pocket Pistol; a handgun that has barely been surpassed for its compact size in more than 100 years. In addition to creating the first .380 ACP pistol, Browning also helped create the .380 ACP cartridge with W. M. Thomas of the Union Metallic Cartridge Company, thus the oft-mistaken European round is actually American in origin.

How does the all-new 21st century Sig Sauer P238 fit into this historic scenario? The innovative little .380 has much of its design firmly rooted in John Browning’s original Colt Model 1911 and Browning-designed short-recoil action. In fact, with the exception of its solid camming barrel lug and lock, the foundation of which dates back to the first Sig models built in the 1940s, the P238 is essentially a scaled down variation of the Model 1911. More accurately, it’s a modernization of the Colt .380 Government Model, Government Pocketlite L.W. and the 380 Mustang semi-autos built circa 1983-1999. Like the old .380 Colts, the Sig Sauer P238 does not utilize a grip safety or barrel bushing. The Sig Sauer is, for want of a comparison, a better built and more modern incarnation.

Gun Details
The P238 is Sig Sauer’s second foray into the compact .380 ACP marketplace. Their first, the P232, was introduced in 1997, long before the current subcompact .380 ACP craze began. The P238 is the smallest .380 Sig Sauer has ever designed and is a near match for size with other popular subcompact .380 ACPs like the Ruger LCP. In fact, the LCP and P238 have almost identical dimensions, but that’s where the two guns part company. The Sig is, shall we day, “old school” in its design and all metal construction, and that is not a bad thing. There is much to be said for tried-and-true engineering principles.

If you are familiar with the basic operation and take down steps for a Model 1911A1 or Colt’s .380 Mustang semi-autos, the P238 really is “old school.” What is new about the P238 is its size and Sig Sauer’s decision to use all-metal construction—a stainless steel slide with an anodized alloy beavertail style frame, rather than a polymer frame. Even the grips are of handsomely fluted alloy construction secured with two large anodized screws. The Sig’s skeletonized hammer adds a customized look to the gun’s sturdy, chiseled appearance, as does the standard Nitron black corrosion-resistant finish. A two-tone version is also available with a matte stainless steel slide, thumb safety, slide stop, and magazine release, contrasting the Nitron black frame, grips, and backstrap. The P238 can also be ordered with rosewood grips, in two-tone with blackwood grips, and any version can be fitted with Siglite night sights.

The test gun was the two-tone version with standard dovetailed front post and rear notch white dot contrast sights. Depending upon hand size, the grips are deep enough to allow a solid hold with the thumb, second and third fingers. The little finger falls squarely underneath the magazine for a firm two-handed hold.
Slide operation is extremely smooth with only moderate spring resistance. The thumb safety clicks firmly and audibly on and off, and the serrated left-side magazine release button drops the magazine with only light thumb pressure. I found all of these advantages to ease of operation, especially for individuals with smaller hands or modest strength, making this an ideal concealed carry arm.
At only 15.2 ounces (empty) and measuring 5.5 inches in length, 1.1 inches in overall width, and 3.9 inches in height, it is easily concealed in a pocket holster and also fits the Galco Gunleather’s YP212B paddle holster. The YP212B fits a variety of compact Model 1911A1 configured guns. The P238 fits equally well with the tension screws tightened. The Galco Yaqui paddle model YP252, which is made for the Sig Sauer P232, will also fit the P238 but the gun sits noticeably higher in the pouch. Of the two I preferred the YP212 for overall comfort and fit. 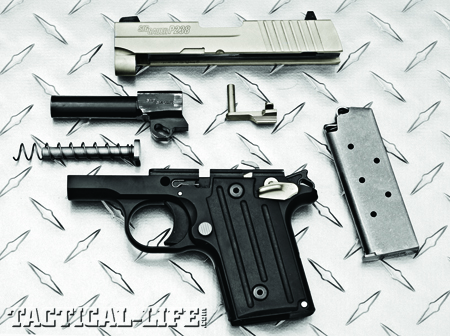 Range Time
The range test was conducted at a distance of 10 meters (33 feet) using two popular brands of .380 ACP ammunition: Sellier & Bellot 92-grain FMJ, and Magtech 95-grain FMC rounds. I also had a small supply of Federal Premium Hydra-Shok 90-grain JHP but not enough to conduct a full test. This is the same ammo I generally carry in my own Ruger LCP and would be the first choice for defensive use.
The tests were fired using a two-hand hold Weaver Stance. The Magtech .380 rounds cleared the ProChrono traps at an average of 876 fps (feet per second), the Sellier & Bellot just a bit slower at 850 fps. Both rounds induced the same degree of recoil from the compact Sig Sauer, which was more than manageable with a firm hold. Limp-wristed shooters need not apply. The old Colt .380 was well named, Mustang. That much of the design is still relevant with the Sig Sauer P238.