“A pistol is used to fight your way to a rifle.” It’s one of those unwritten laws drilled into the heads of many uniformed professionals. It’s a statement that sounds tough, but incidents of armed combat within US borders typically last seconds, often occurring within 20 feet and in low light. I don’t know who authored this popular saying but I can tell you they’ve never seen the new Sig Sauer P556.

Sig Sauer’s new P556 Pistol doesn’t look like the typical handgun, nor is it chambered in a popular pistol cartridge. After a thorough evaluation of the P556, there’s only one word I’d use to describe it… radical.

Gun Details
This departure from conventional handgun wisdom is a pistol-only configuration of Sig Sauer’s highly successful SIG556 semi-automatic, gas operated rifle. Like its big brother, it shares the same operation in a modified receiver, chambered in 5.56mm NATO and compatible for use with .223 ammunition. The gas block is affixed to the barrel and contains the gas port, the operating rod, and accepts the front sight and supports the handguards. The durable two-piece handguard pays tribute to the rifle with a Picatinny rail running along the 6 o’clock position. 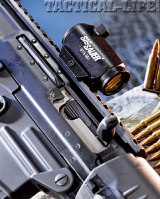 A two-position gas valve regulates pressure that cycles the pistol. With the gas regulator rib in the vertical position, the P556 functions in normal circumstances giving the best performance and function. With the rib turned to a slanted position, the P556 can overcome cycling or ejection problems due to heavy fouling. Like the SIG556, this setting releases a larger volume of gas against the operating rod to improve functioning. Sig Sauer notes, “The need to use the gas valve in Position 2 is an indication that the pistol requires cleaning.”

The P556 Pistol is fitted with a 10-inch, cold hammer forged barrel that’s mechanically mated to the high-strength, Nitron-finished steel upper receiver carrying a flip-up rear sight and containing the bolt carrier/bolt head assemblies. The lightweight aluminum lower receiver, or trigger casing, is hardcoat anodized and carries the firing and safety mechanisms, bolt catch, magazine well, trigger and pistol grip. Also situated along the side of the trigger casing is the ambidextrous two-position safety selector that’s very intuitive for those already familiar with operating AR-style rifles.

At the front of the forend are what Sig Sauer refers to as “emergency sights.” Normally stowed to protect them from damage and interference with optical sights are a front post sight that works in tandem with a flip-up rear sight buried within the integral Picatinny accessory rail at the back of the upper receiver. A flip-up front sight is also optionally available.

Windage adjustments are made to the P556 by rotating the front sight screw left or right. This aspect is quite different for those used to adjusting an AR’s A2 sighting system with the windage knob at the rear sight. Adjustments are made using a 4mm Allen key and one full rotation shifts the impact of rounds approximately 1-inch at 100 yards. Elevation adjustments can be made by loosening the Phillips screw and raising/lowering the sight plate at the back of the rear sight. One mark of movement on the rear sight changes the point of impact approximately 0.75- to 1-inch at 100 yards.

Just like the SIG556 carbine, the P556 utilizes the same AR-style 30-round polymer magazine bearing the company’s brand. The pistol is compatible with other M16/AR-15-type magazines but the Sig Sauer magazines sport rails on their sides that make them stackable for faster reloads.

The most obvious aspect of the P556 differentiating this pistol from the SIG556 is a missing stock, and you can’t just put one on. The ribbed FAL-style pistol grip is a carbon copy of the carbine’s but stability when shooting the Sig Sauer P556 offhand is best attained harnessing isometric tension using a sling attached to the trigger casing’s backplate.

Shooting Impressions
Removing the P556 from its case drew a lot of attention at an indoor police range. A number of officers began telling me how they enjoyed evaluating it “two years ago,” confusing this pistol with the SIG556 rifle. As officers that carry Sig Sauer’s .357 SIG chambered SP2022, they are quite familiar with the operational dependability and reliability of Sig Sauer handguns, but none like this.

Rarely do handguns feature a gas-operated, rotary bolt, semi-automatic action that chews through a cartridge more often associated with stocked rifles. Stopping by a nearby gun shop earlier, I purchased a good quantity of high-demand 5.56 ammunition that remained on store shelves. 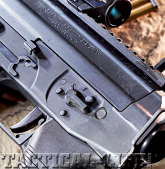 Getting the accuracy test out of the way first, I was joined by three other off-duty officers with each of us firing our own test. With all controls the same, I was particularly interested in seeing how the P556 performed in the hands of shooters with varying degrees of experience and familiarity. A bench was set up with a Caldwell Pistolero rest at 25 yards and a hodge-podge of AR magazines were loaded. While things were being prepared I attached a Sig Sauer red dot optic that comes supplied with the pistol.

Loading a magazine of 55-grain Hornady TAP ballistic tip rounds, one feature quickly becomes apparent to these officers. Those that tried to use the bolt catch to chamber a round rather than drawing back the charging handle on the bolt carrier’s right side found that you couldn’t just slap it or push the button in. Rather it works as a lever and has to be pushed upward to release the bolt.

The best group resulted from Hornady’s 55-grain TAP fired first, measuring an incredible 0.69 of an inch. The second best group measuring 1.04 inches was obtained using the heavyweight 75-grain TAP round, illustrating that the P556 didn’t care what ammunition was used. These groups were similarly repeated with even the worst of five loads measuring a very respectable 1.64 inches.

Predictably, firing a 5.56mm NATO cartridge out of a 10-inch barrel created some visible flash. But using the Lake City manufactured 62-grain military ball produced fireballs. It didn’t matter what ammunition we used, function and performance was unaffected by bullet type or weight. The P556 reliably fired an assortment of cartridges loaded with bullets weighing between 55 and 75 grains. There was no point-of-impact shift observed out to 100 yards and all groups stayed well under 2 inches at the bench with an average of all 25 five-shot groups measured at just 1.18 inches. 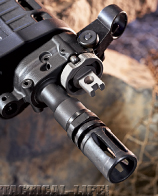 To evaluate function, the P556 was taken off the bench and slung with a Z-M Weapons’ single point bungee sling. Using this sling, each operator found the red dot-equipped P556 stable by pushing the pistol forward against the sling’s tension. Combined with the pistol’s unique spring-drawn recoil system, weight is shifted towards the muzzle during operation, helping to make rapid follow-up shots extremely controllable. All 30-round groups fired rapidly from each standing shooter struck inches well within the white of the FBI’s qualification target.

We did experience two stoppages after 250 rounds that were attributed to the lips on Sig Sauer’s supplied polymer magazine. This conclusion couldn’t be verified but was drawn from the fact that each stoppage featured a vertically tipped cartridge that was held into place at the rim by the magazine’s lip. Using a number of other different magazines including Magpul’s PMAG, well-used military magazines and steel body magazines, none of us could repeat or induce any other type of malfunction.

Firing the P556 with the gas valve in Position 2 is a unique experience. For testing, I made the switch without the need. I hadn’t experienced an issue with the P556 but the pistol should be returned to Position 1 as soon as normal functioning returns if you have to use this feature. Sig Sauer cautions: “Continued operation with the gas valve in Position 2 will increase recoil and place unnecessary stress on the pistol.” During testing, not only was felt recoil increased, but so was sound.

Final Notes
The Picatinny rail located underneath the forend on the Sig Sauer P556 Pistol is very useful in adapting accessories like lights, lasers, and particularly a bipod for long range shooting. As tempting as it might be, fight the urge to attach a vertical grip at the forend of the pistol. Doing so will violate NFA rules.

“The P556 would be great for entry teams delivering a warrant,” said one undercover officer. “We often go into places with tight walls and cluttered spaces. I could pull this pistol in towards my body without having to really drop the muzzle, regardless of my Point Blank vest.”

However, you don’t have to wear a uniform to appreciate the benefits of this new compact Sig Sauer. Many argue that the ballistic qualities of a 5.56mm cartridge are better suited for home defense than a popular self-defense cartridge because it tumbles when struck, loses momentum and quickly fragments. With obstacles and safety concerns inside the home, the red dot helps to quickly obtain sight picture while improving accuracy and attaching an aftermarket light to the forend’s rail will illuminate potential threats. Having a pistol with a 30-round capacity means you should have all you need, regardless of stress, and the intuitive-operation and ergonomic handling means the Sig Sauer P556 can always be at the ready.