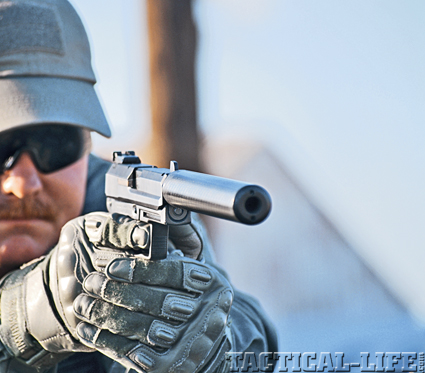 The Lion suppressor and the HK USP are serious tools for serious professionals. The Lion uses advanced carbon fiber, laser-fusing and advanced engineering to build this suppressor.

In his native city of Athens, Greece, he was a noted designer at the age of 13. Internationally, he was known as a fine jeweler. In Canada, he was known as a champion pistol shooter. In America he sits in a room full of machine guns and suppressors. Sounds like Hollywood, but in fact, it is the real life of George Koumbis. George is better known as the owner of Shooters Depot and the creator of the Lion suppressor using the patented ARIES system. So what is the big deal about another handgun suppressor? In the case of the Lion, it is two words—carbon fiber. Lion Shooters Depot’s Lion suppressor is revolutionary in the use of carbon fiber for their suppressor’s outer tube. 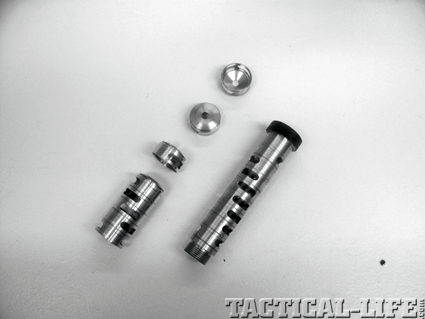 The heart of the Lion suppressor is a series of precision machined baffle (left), threaded and then laser fused into a single unit. The Lion shares the same design and techniques with the ARIES rifle system show here (below).

Carbon fiber-reinforced polymer, also known as carbon fiber-reinforced plastic (CFRP or CRP), is commonly referred to simply as carbon fiber for the principle component of the composite. When the carbon fiber and a polymer are combined it is a composite material or simply referred to as a composite. The polymer material most often used is epoxy. Carbon fiber is a very strong, light, but expensive composite material. It is similar to fiberglass. The actual carbon fiber is principally composed of carbon atoms that form an extremely thin fibers about 0.005 to 0.010 millimeters in diameter. The carbon atoms are bonded together in microscopic crystals and are aligned parallel, creating a long axis of the fiber. This alignment makes the fiber very strong. Thousands of carbon fibers are twisted together and form a yarn, which is then used as is or woven into a fabric. Alignment and weave of the fibers and the type of polymers are carefully chosen to obtain a subsequent a high strength-to-weight ratio and stiffness. The lower density of carbon fiber in relation to steel and even aluminum makes it a remarkable choice where weight is an issue. Carbon fibers are very resistant to heat if a thin layer of carbon fibers is molded near the surface. The dense, compact layer of carbon fibers also reflect and dissipate heat very well.

Wrapping a woven material of fine carbon thread over a spinning mandrel makes carbon fiber tubing. As the woven material is laid down, a polymer resin is applied to each layer. The combination of fiber and resin is stronger than steel and lighter than aluminum. The resin is then heat-cured in a controlled environment.

The Lion suppressor and the HK USP are serious tools for serious professionals. The…