In Spring 2007 my wife and I drove from home near Fort Worth to visit family in New Orleans. I carried a CAR-15 in the trunk of our car, secured my Heckler & Koch P-7 in the glove compartment and armed myself with a vintage Browning P-35, my weapon of choice since serving on the Hostage Rescue Team (HRT).

Our journey to Louisiana was uneventful and our return on a warm Sunday afternoon started as a leisurely drive, until the Dallas/Fort Worth area on I-20. My wife wanted some bottled water. I pulled into a service station on the north side of I-20. We had fuel, so I bypassed the pumps to park and run into the mini-mart. As I pulled past the pumps and store entrance, I noticed a bandit barrier protecting the cashier. My antenna went up. There was enough concern over robberies to protect their employees. Better be alert.

I nodded toward the dumpster and under my breath said to my wife, “I don’t like that one.” We entered, purchased water and exited the front door to return to our truck. I took my wife’s arm and steered her toward the center of the lot, toward the pumps, not along the sidewalk. I wanted space, for time to react if necessary. Our route to the pickup truck was a gentle arc, letting me visually cover most of the parking area. Using the sidewalk between parked cars and the mini-mart would have been seriously impeded my ability to see a threat before it was upon us.

Training and experience have taught me to rapidly close with an opponent in a CQB situation and give him little time to react. In the HRT, our CQB philosophy was “speed, surprise and violence of action.” We always wanted to launch rescue operations as close to the subjects as possible, to maximize our tactical advantage and firepower. Were I to be attacked I needed to reverse that, to gain space and time, and rely upon my firearms skill to prevail.

As we approached the truck, the individual still stood by the dumpster, arms still crossed, watching us intently. His gaze did not leave us as we approached the truck. I opened the passenger door and told my wife, “Get the pistol.” I walked behind the truck and thought for a second about retrieving the CAR-15, but did not because I had not been threatened and did not want to alarm customers. But suspicions would change to threats in seconds.

As I turned the rear corner of the truck, the man in the sweatshirt (“Subject One”) started walking briskly to my left in the direction of the pumps, never taking his eyes from me. There was no doubt in my mind he was trying to circle behind and very likely put me in an “L” situation. In a CQB situation putting your opponent in the “L” or crossfire is the ultimate tactical advantage. It takes more time to write about this experience, than the fractions of seconds it takes for it to actually happen.

Most people would react by immediately getting to the safety of the car and locking the doors. This never entered my mind. If an assault unfolded, as I could see it beginning, I did not want to be in my truck trying to put it in motion when an aggressor approached my truck, gun in hand. That would put me at the mercy of my attacker(s). With attackers in such close proximity, my weapon would not have served me well especially if two attackers approached from opposite sides of the truck.

My thought was to engage head-on, outside my vehicle. Chances of survival would be better if I neutralized the threat at a distance. I immediately opened the driver’s door and drew my weapon from the DeSantis holster that holds the P-35 “cocked and locked.” I positioned myself behind the open door and removed the safety. Gun now held low behind the door in both hands, I started turning my head back and forth between subject number one and in the direction of the dumpster. If there was to be a fight I wanted it on my terms and I wanted as much cover as possible.

Immediately Subject Number Two appeared from behind the dumpster, pulling a ski mask over his face as he moved directly toward me. I looked back and forth from Subject One to this new threat. I presented the P-35 with the dot of the front sight aligned on the chest of Subject Two. I thought I would engage Subject Two with a double tap and then engage Subject One with two shots and then re-evaluate. I could not see the hands of Subject Two as they were hidden in what appeared to be a large pocket in the front of his sweatshirt. Based on the action of the two of them and the fact that Subject Two now wore a ski mask as he quickly moved toward me, there was no doubt that our lives were in danger.

This was to be a brazen assault for purposes unknown. I feared for our lives. The Browning has a two-stage trigger; I took up the slack and was about to engage. Subject Two was within 10 yards of my protected position when subject Number One screamed “No, no, no.” With that, both subjects whirled and sprinted back toward the dumpster and disappeared. I locked and closed the door to the truck and told my wife, “If they come back, shoot them through the window.” I then made a wide arc to the left of the dumpster and observed three men in ski masks and Subject One running into the darkness.

The threat was over and we were lucky to have survived it. In discussing the event with Fort Worth Police and later with their training academy staff, they commented that I had in effect laid an ambush for the four who intended to ambush us.

Lessons Learned
The ability to arm myself very likely saved my wife and me from great bodily harm or death. Merely being armed will not save you if don’t recognize suspicious situations and position yourself for tactical advantage or escape. Your handgun can deliver suppressive fire, but it will not stop bullets from hitting you. If an assailant is able to close to a near position on you, your weapon then becomes useless.

In retrospect, I should have retrieved my rifle as I circled the truck: Use a handgun to fight your way to your rifle. The CAR-15 is very compact. It would have been simple to retrieve it, charge it and keep it inconspicuously near my leg. Had things deteriorated into a gunfight, the CAR-15 would have been an excellent equalizer.

There are several clues of an impending assault included: bulletproof glass protecting the cashier; Subject One wearing a hooded sweatshirt on a warm evening. Subject One watching intently as I exited my truck, and continuing to watch my wife and I throughout. Subject One maneuvering behind me to put me in a potential crossfire. And Subject Two pulling a ski mask over his face and moving briskly toward me (a definitive clue).

Points To Remember
Always take any escape route you create. Here, escape was not an option. I hadn’t time to enter my truck and drive away before attacker(s) could close and engage us with weapons.

Carry a large handgun: The Browning is large and intimidating. Subject Two likely did not realize I was armed, but Subject One saw and warned his companion to abort. Armed with an unobserved small handgun, I probably would have been forced to take a human life.

Confronted with any type of a threat, do not assume the attack will come from one direction. Be prepared to respond to multiple threats from at least two.

It is more important to not lose a gunfight. Losing means that you are wounded or killed even if you shoot your opponent. You may win the battle and be seriously injured in the process. Avoid the gunfight if possible by escaping. If threatened and a safe avenue of escape is available, take it! To not lose the gunfight, be alert, maneuver and always take advantage of whatever cover is available to you.

If you decide on a CCW permit, carry a substantial handgun in a secure holster. A fanny pack is scant better than leaving your weapon in your car or home. Had my weapon been in a fanny pack, I might not have been able to draw it fast enough to be effective. A good holster may save your life.

Do not carry a weapon without taking a state-approved concealed carry course. You will learn little marksmanship, but much about your legal rights and obligations. If you must defend yourself, you want operate from a strong legal position. You will have much more credibility if your carry is legal.

Practice, practice, practice. You cannot just purchase a weapon, get the appropriate permit and be safe. You must be able to focus your attention on a threat and make good decisions without concerning yourself with the function of your weapon. 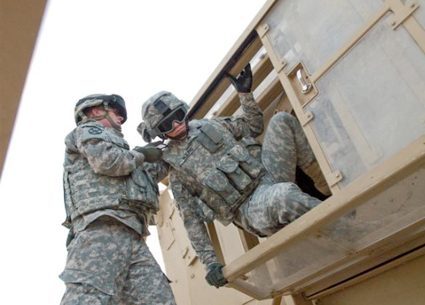