0
SHARES
120
VIEWS
Share on FacebookShare on Twitter
With a remarkable selection of 1911’s, Smith & Wesson continues its tradition of innovation with their Titanium Firing Pin .45 ACP 1911.

At 100 years old, and all but growing younger with each year, the 1911’s popularity seems on a perpetual rise. I am not surprised when someone asks my opinion of a new brand I’ve not heard of. In a world where polymer-based pistols have such a large market share, “Old Slabsides” has proven itself and stood the test of time as a premier defensive handgun. 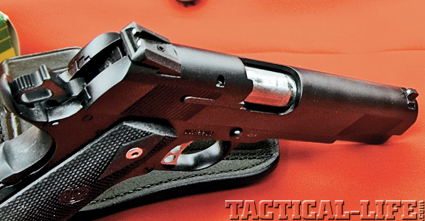 The dovetail-mounted Novak Lo-Mount sights with their three white dot setup are excellent for a defensive pistol.

In 2002, when Smith & Wesson announced they were “testing the waters” regarding a 1911 wearing their name, folks did double takes, stammered, and stuttered. Could it be true that S&W would build a 1911? In 2003, not only was it true but also the resultant 1911 was a good looking rendition of the old warhorse that ran like a thoroughbred, and the market gobbled them up. S&W followed suit by adding model after model to meet customer demand. I guess they found the waters warm. Of course S&W did not just produce “another” 1911, they added their own stamp to the design to make it their own. The SW 1911 includes an external extractor and a firing pin block system, as all S&W pistols do, along with all the expected accoutrements on a factory 1911 today. 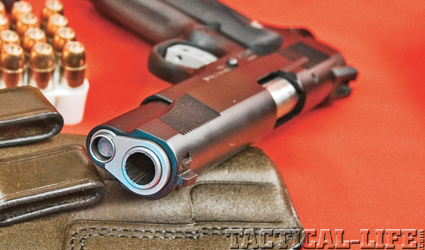 Of course S&W is no stranger to titanium, having used it to produce a ton of lightweight revolvers for a number of years. However, recently they have used titanium in their ever-burgeoning 1911 line to transition from the Schwartz firing pin safety system currently in use; not wholesale, mind you, just in one model—the TFP (Titanium Firing Pin) Model. They simply replaced the steel firing pin with one from a titanium alloy. At 45% of the weight of steel, though identical strength, titanium’s lower mass develops less inertia than steel.