0
SHARES
107
VIEWS
Share on FacebookShare on Twitter
One of the classic campfire topics of late seems to be, “What’s the best bear gun?” It turns up here and there with some degree of regularity, and more so the farther north you go on this continent. From smaller black bears on up through the bigger browns of the Lower 48 to the coastal grizzlies of Alaska and the polar bears of the ice cap, bears and what to do about them have been legitimate subjects for conversation among outdoorsmen since the time of the caveman. Bears can be big, and we’re relatively small. Bears are very powerful; we’re not. Bears do not respect boundaries or “No Trespassing” signs, and if you accidentally get betwixt a mother bear and her cub, you’re pretty much toast. 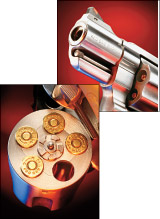 Bears may be something of an overblown threat, varying from region to region, but bear attacks do make the news periodically, and here in my own state of Utah, a bear killed a young boy in an organized campground just a few weeks ago as I write this. Bears are neither a Yellowstone-only nor a wilderness-only risk, and as numerous factors combine to bring them into increased contact with human populations, more injuries and fatalities will continue to occur. It is not paranoia to be prepared for a bear encounter, and like many other emergency plans we make, the correct tools can be an important part of the overall picture. Recognizing this, Smith & Wesson has produced two variants of their new X-frame revolver for protective use, rather than hunting.