0
SHARES
101
VIEWS
Share on FacebookShare on Twitter
One of the all-time classic and iconic Smith & Wesson revolvers, the Model 29 in .44 Mag has achieved enduring fame in the writings of the great Elmer Keith, the exploits of San Francisco’s most infamous cop Inspector Harry Callahan, and the hands of generations of big game hunters who used it (rightly or wrongly) on everything from jack rabbits on up to cape buffalo and coastal grizzly. From its introduction in December of 1955 as a joint collaboration between S&W and Remington, the M29 in all its subsequent variations has achieved a near legendary reputation as a supremely powerful handgun capable of shooting through tall buildings, stopping speeding locomotives in (or on) their tracks, and blowing public enemies clean off their feet and into the nearest holding pond.

While the truth doesn’t quite live up to the M29’s elevated publicity, and the .44 Mag having been far eclipsed in power since Harry called it “…the most powerful handgun in the world…” back in 1971, neither the revolver nor the caliber has sat still during the past 38 years since Clint Eastwood and his Malpaso Company turned what was then a relatively obscure hunting revolver into the Holy Grail of big-bore hand cannons for generations of pistoleros, whether they could handle the big gun or not.

The original M29 and subsequent 29-1 and 29-2 versions each offered slight engineering changes over the years, but it wasn’t until the late 1980s that metallic silhouette shooters started raising a fuss over their high mileage M29s wearing out prematurely, and some were exhibiting a phenomenon where the cylinder would actually unlock under recoil and spin backwards slightly. S&W at first discounted the unlocking claims, but after analysis of high-speed video footage confirmed it, the company put its engineers to work on the problem, and changes began to appear in the M29-3 and M29-4 that subsequently lead to what S&W calls the Endurance Package in the M29-5 and successive versions on the .44 Mag N-frame guns. The Endurance Package incorporates relatively minor internal changes to resist cylinder backspin and parts wear under the repeated pounding of heavy magnum loads, and aside from the lengthened bolt stop notches in the cylinder the alterations are not visible from the outside. They do make a difference in overall longevity for owners who shoot their newer S&W .44 Magnums. 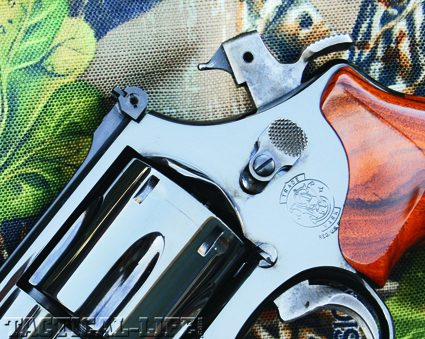 Wheelgun Details
S&W offers a number of .44 Mag variations in their current catalog, but my personal .44 Mag Grail Gun has been the older M29-5 in classic form. It predates the current S&W lockwork, and it has all of the original features that made the gun what it is, plus the full Endurance Package. The Endurance Package doesn’t mean all previous versions will fall to pieces if you shoot ’em, it just means earlier variants may develop end shake and timing issues a little sooner, and may exhibit the back-rotation effect in certain circumstances. It has the traditional fluted cylind er and does not have the full-length barrel underlug of later configurations, and it came with S&W’s famous “Four Ts” common to most of the high-end Smiths: target hammer, target trigger, target sights, and target grips. The hammer has the wide spur, the serrated trigger is nearly the full width of the triggerguard, the sights use a red insert in the Baughman ramp and a white outline rear blade in the Micrometer click sight base, and the wood grips were the large hand-filling type that used to be standard on S&W’s premium revolvers. The M29 was the company’s flagship model for many years—it got the royal treatment and the M29-5 was no exception.

Finding one in good shape on the used market may be a challenge, since that version wasn’t made for very long. Three years ago I stumbled across one unexpectedly in excellent condition on an Internet gun sales site, but the owner sold it out from under me while I was trying to divert the financing. But, my longtime local dealer surprised me with what looked like an unfired 6-inch sample recently during a visit to his shop, and what it turned out to be was a factory refurbish done on a damaged gun he’d taken in trade. The topstrap was scratched, the front sight was missing its insert, the rear sight blade was broken, and the grips needed replacing. Rather than deal with it himself, he shipped it off to S&W with instructions to repair the damage and re-finish the entire revolver, which they did.

We don’t often hear much about the re-finishing work that S&W can do on older revolvers, but it’s impressive. Looking at my “new” M29-5 closely, I can’t see any signs of damage anywhere on it. It very simply looks brand new and totally unfired. The bluing is a very deep and glossy blue/black over what looks like a perfect polishing job with no waves in the barrel’s surface, no rounded edges, and no burnout scallops on any of the stamped lettering. The cylinder shows very minor rotational play when locked, and zero fore and aft movement. The single-action trigger breaks clean at 4 pounds with a very tiny bit of overtravel. My copy of the repair invoice provided with the gun lists a $190 charge for the complete re-finish, including re-cutting the forcing cone, and $75.90 for installing a new set of N-frame square butt checkered rosewood target grips.

The secondary market can often be a good hunting field if you’re looking to acquire a .44 Mag revolver. Many prospective big-bore shooters will buy one just for braggin’ rights, discover they didn’t quite understand what they were getting themselves into, and store it away on a shelf someplace after firing half a box or so through it till the day comes to trade it off on something else. That’s good news for people like you and me, because it means our chances of picking up a very low mileage gun at a lower used gun price are pretty good. The key is to know what to look for, and what to look at when you find it. External cosmetics don’t tell the whole story, and unless the gun’s beat to pieces you may find that a factory re-finish can net you the equivalent of a new gun that’s no longer made in the configuration you want. I lucked out on my M29-5; the dealer said it showed few signs of being fired at all when he took it in. S&W tells me it shipped to Gunarama Wholesale in Spokane, Washington, on August 10, 1992, and I wouldn’t be at all surprised if it’s actually in better shape now than it was then. The only modifications needed were replacing the narrow factory grips with a set of Craig Spegel’s wood. Never yet met S&W factory grips that fit my hand no matter how nicely done they are. 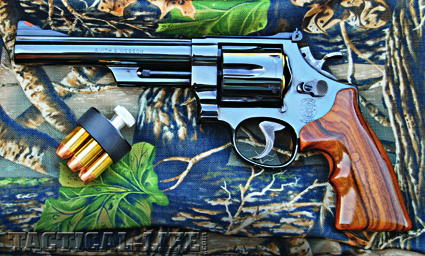 Looker Or Shooter
Although it was tempting to just frame it and hang it on the wall, this revolver was bought to be a working gun, and took a trip to the gravel pit with four different factory loads running from light to heavy. The big Smith did what I expected it to do off a rest at 25 yards, with the exception of running out of elevation adjustment to dial in the Black Hills 300-grain JHPs.

Don’t turn your back on a good used Smith & Wesson revolver or autopistol just because it’s not pretty. The company can do a facelift on a faded beauty that you just might find astonishing.