0
SHARES
353
VIEWS
Share on FacebookShare on Twitter
Versatile and lightweight, the new S&W Governor revolver puts six rounds of 2½” .410 bore shotshells, .45 ACP or .45 Colt, alone or in combination, at hand. It incorporates S&W’s Scandium frame for reduced carry weight and comes with two 6-round and three 2-round moon clips for use with .45 ACP.

There are three things you look for in a personal or home defense handgun—ease of use, accuracy and stopping power. The new Smith & Wesson Governor delivers all three and in a choice of three different calibers that can be loaded in the same cylinder. 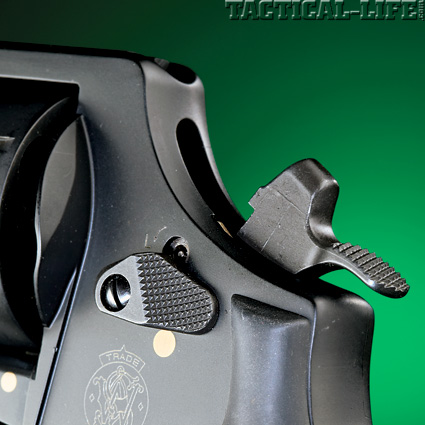 The large serrated hammer spur makes cocking the gun very easy and proved to be smooth and consistent, even when rapid firing single-action.

Why three? Up until now the alternate cartridge choice for defensive handguns chambered to shoot .410 bore shot-shells has been .45 Colt. This is a fine cartridge with a legendary history of use in America dating back to the 1870s. Today it is still regarded as an Old West cartridge, although there are self-defense loads in .45 Colt that match other large caliber rounds grain-for-grain in stopping power. However, with the option to carry a combination of shotshells and .45 ACP, the new S&W becomes the first triple-threat revolver in this growing class of personal protection and home defense firearms.

Gun Details
Smith & Wesson named the new multi-caliber revolver the Governor for its “authoritative appearance and specialized features.” And while we might have preferred a more traditional S&W numerical designation to giving the gun a name, Governor is definitely an unforgettable one. At the core of this revolver is Smith & Wesson’s patented heat-treated Scandium frame known for superior strength and reduced weight, both of which come into play here. Capable of chambering .45 Colt, .45 ACP and .410 bore 2½-inch shotshells, the gun is ideally suited for both close range defensive work within the confines of a home, and more distant encounters at ranges of up to 25 yards. 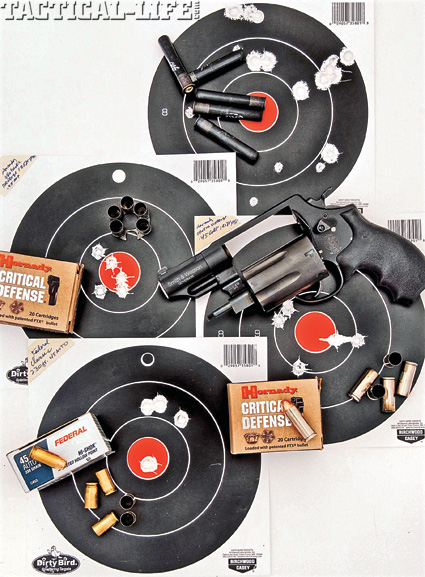