One of my favorite winter pastimes is shooting icicles with handguns– yes, icicles! I usually pack four or five revolvers and pistols into the car. I select remote cliffs where water oozes out of the rocks. Along many of these cliffs I can shoot to my heart’s content and never run out of targets—plus, as a bonus, there are never any bullet-riddled cans or plastic bottles to clean up. I’m a serious reloader. Consequently, revolvers predominate in my icicle shooting. If ever there was a series of great looking double-action revolvers it has to be the K-Series from Smith & Wesson.

It was one early winter afternoon of shooting icicles that I told myself, “Nick you need a K-22.” In the 1960s one of my mentors in hunting was Arch Hulings, a Marine veteran of Guadalcanal. Arch had some guns I yearned for, like Model 70 Winchesters in both .270 and .220 Swift, a Browning Superposed, an S&W K-22 and others. Right from first glance those decades back I knew I loved the looks of that K-22—as well as the feel and balance when Arch had me shoot it at the range. 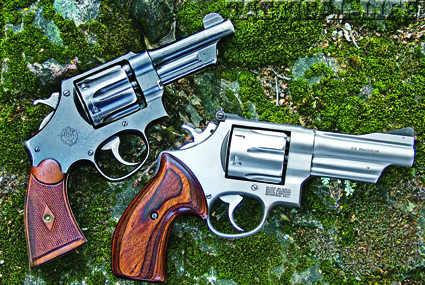 As most handgun buffs know, Smith & Wesson started bringing back some of their old “Classics” that had been discontinued, and several K-Series revolvers are among them. A figurative jillion of their Model 10s were produced—though in its earliest days it was called the .38 Military & Police model. Manufacture started way back in 1899. Thousands of them found their way to foreign armies and foreign police departments, though many of these .38 Military & Police models were sold here in the USA as well. Tens of thousands, maybe more were produced. Eventually the name .38 Military & Police model was changed to the Model 10. The Model 10 was/is sort of a no frills 6-shot double action with fixed sights—in .38 S&W Special with many barrel lengths once offered—2-, 3-, 4-, 5- and 6-inch. The Model 10 is one that S&W brought back in 2010 and is available with a 4-inch barrel in their “Classics” line.

It’s the looks of the Model 10 that appeal—and those cosmetics were transferred to many of the K-Series revolvers. Of course, the K-Series only refers to the relative size of the frame. The S&W J-frame was smaller than the K-frame. As more powerful handgun cartridges were developed Smith & Wesson went to bigger frames, the L- and the N-frame, to better accommodate those more powerful cartridges.

Back to icicle shooting—with all the shells fired up that I had brought along I headed for Schultz’s Sportsmen’s Stop—a gun emporium not far from where I live. There I stated my case, “Please try to find a K-22 for me.”

“We have one,” was the comeback that surprised me. It was a Model 17-4 (the “4” indicating it was the fourth iteration of the then current Model 17 production—i.e. slight change). This 6-shot .22 rimfire has a 6-inch barrel—and the best trigger I have in my arsenal by far. Was the trigger worked on—or was the trigger like this right out of the factory? Only some previous owner knows. There’s a good bit of blue wear—mainly on the barrel—obviously due to holster storage. But the gun is very tight in lock up and shoots better than I can hold. This Model 17 was just what I was looking for—a simple shooter. 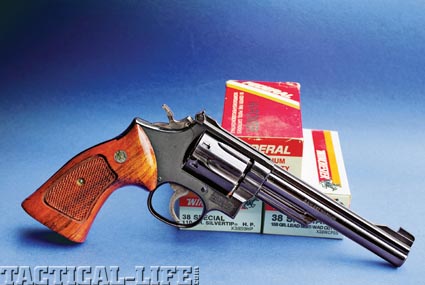 The author acquired a used Model 19 with a 6-inch barrel for a good price, and was very happy with his purchase due to its undeniably classic appeal.

Almost immediately I decided I had to have a K-38. Now there is a K-38 Model 14. These were manufactured from 1941 through 1981. According to the “Blue Book” prices should be similar to those already given for the Model 17—the .22 rimfire on the K-frame above. What I ended up finding, or rather Schultz’s Sportsman’s Stop found for me, was a Model 19—again on in K-frame—this the .357 Combat Magnum. Offered with barrel lengths of 2.5, 4 and 6 inches, the “Blue Book” values are also similar to the above. The one I bought has a 6-inch barrel and is in excellent condition with no blue wear from holster use. It has the original checkered wood grips while my K-22 Model 17 has Pachmayr Target-type grips.

Don’t forget to clean a .357-chambered revolver’s cylinders often if you shoot .38 Special loads out of it. There will be a build up of residue just in front where the .38 bullet leaves the shell casing. The longer you go between cylinder cleanings the more difficult it is to do a thorough cleaning job. 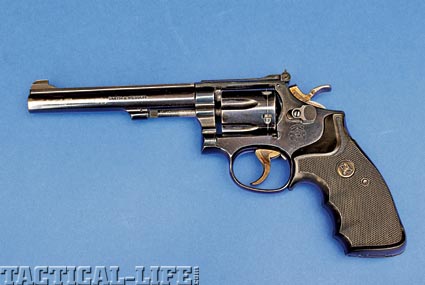 Used K-Series revolvers will likely be found in a variety of conditions. This K-22 Model 17 shows some wear, but it’s a great shooter with an even greater trigger.

While the two K-series guns I bought are also available brand new, it’s probably worth looking for a used one because of the “Blue Book” price suggestions. I would also tell you that both on the internet and at gun shows, prices for these guns are often significantly inflated. It might pay to buy a copy of the “Blue Book of Gun Values” to have with you for negotiating.

If you are in the know with regard to older Smith & Wesson revolvers you are well aware of pinned barrels, the number of frame screws and about recessed cylinders. Older Smith & Wesson revolvers had a pin that was inserted in the frame—just in front of the cylinder. That pin, of course, went through the frame front and the back of the barrel. Current thinking is that a “pinned barrel” is no longer necessary from a strength standpoint—probably because of newer, stronger steels, tighter tolerances and better engineering. However, if you pick up a used K-series revolver with this pin in place then the value does increase. 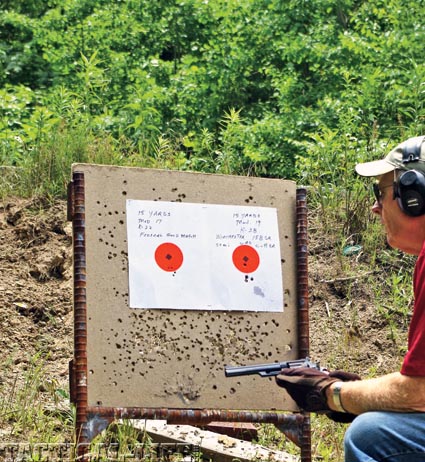 The author checked out the effective accuracy achieved using both his Smith & Wesson Model 17 and Model 19.

Similarly, the more screws on the right side of the frame, the older that Smith is. The oldest guns had five screws, later guns came with four screws, and the most recent Smiths come with three screws—always keeping in mind that one of those screws is hidden under the right side grip. Again, the more screws (five max) the older the gun, so in similar condition it may be worth more to a collector.

This article has not been meant to be the last word in Smith & Wesson K-frame history. Hopefully, however, I have helped you expand your knowledge and interest in these good looking, good shooting classic revolvers.

I would like to thank Debora Anne Coulter (dschultz@windstream.net; 724-478-2538) for her help in expanding my knowledge about Smith & Wesson revolvers. Though I’ve known Debbie all her life and was well aware of her gun knowledge, I did not know that she was a veritable font of information on S&W. She owns Schultz’s Sportsmen’s Stop in Apollo, PA. I worked with her dad, Matt Schultz when we were both supervisors at US Steel. Matt started Schultz’s Sportsmen’s Stop in 1967—part time—then went full time with his gun shop in 1972