0
SHARES
76
VIEWS
Share on FacebookShare on Twitter
Smith & Wesson has a long history of producing special runs of semi-custom firearms for their distributors. These special runs are usually a combination of features, barrel lengths, and calibers that do not warrant becoming a full production run. However, when a large distributor commits to buying 500 or 1,000 units, S&W can justify the production of a non-standard pistol. The distributor then takes on the financial obligation off getting the guns into the hands of the dealers and ultimately the buying public.

I routinely cruise S&W’s website to see if there are any new products that I may have missed. Such was the case when I recently came across a two-tone, M442 Airweight Centennial that had a Mag-Na-Ported barrel. Being a J-frame aficionado, I was immediately interested and called to get one. I learned that this was a special production item for Bangers Distributors and the complete run had already been shipped. My next call was to the great people at Bangers, who have been in business since 1986 and actively involved in limited edition S&Ws for many years.

The J-frame Centennial was first introduced in 1952 to celebrate the 100th birthday of the company. In 1957, Smith began assigning model numbers to their firearms and the Centennial became the M40. It was a true pocket pistol with a concealed hammer, sleek silhouette, and a grip safety that protruded from the backstrap of the frame. It was chambered in .38 Special, which at the time was considered a “powerful” cartridge. The only drawback was it weighed a solid 21 ounces. The popularity of the M40, and the demand for a lighter revolver, resulted in the alloy framed M42. Sadly, the M40 and M42 were discontinued in 1974 and, as with many things, we don’t really appreciate them until after they are gone. Fortunately, in 1990, S&W introduced the M640 all stainless Centennial and later brought out the aluminum framed M442 and the M642. 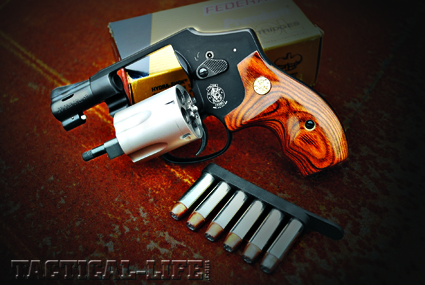 Gun Details
The M442 Mag-Na-Port edition is, in most regards, a stock M442 that weighs 15.4 ounces. It features a black anodized frame and a matte stainless cylinder giving the M442 a distinctive appearance. Over the years, Smith has produced two-tone themes in limited numbers.

The M442 is chambered for .38 Special and is rated for +P ammunition. The barrel is the standard 1.88 inches in length with the familiar ramp front sight. The S&W crest is etched into the left side of the frame, just below the cylinder release. The M442 has the internal lock in order to make it legal in all 50 states. While some purist refuse to purchase any Smith with the lock, I have become accustomed to it and don’t find it objectionable. The cylinder release is the new design that has a tapered trailing edge to reduce the chance that the shooter becomes a victim of the J-frame thumb. The trigger pull is smoother than some of the other J-frames I have shot recently. All five chambers locked up positively well before the hammer fell.

The stocks are a new design that I found comfortable and appealing. As with all of Smith’s wooden composite stocks, these are made by Altamont and feature beautiful markings. The stocks leave the backstrap exposed while providing increased material on the frontstrap. This design provides a greater circumference and allow for a more positive purchase without increasing the overall size of the pistol. The stocks also have a front finger swell, and the top of the stocks are thinned to support the thumb and allow clearance for speedloaders.

What makes this pistol special is the Mag-Na-Ported barrel. Mag-Na-Porting was invented by Larry Kelly around 1965 and it revolutionized recoil management on calibers from .22 LR to .460 Weatherby Mag. According to their website, “Mag-Na-Porting is accomplished with Electrical Discharge Machining (EDM), a surgically precise method of removing metal. Dielectric oil is flooded over the area of the barrel that is to be ‘cut,’ and an electrode added. When voltage is applied, the oil is ionized, which establishes a continuous flow of electrons between the electrodes and the barrel…an electrical arc. It is the electron flow, which does actual ‘machining’ of the trapezoidal ports. There is no damage to the metal surrounding the ports, no machining marks, as would be the case subsequent to a drilling operation.” The angle of the ports is between 35 to 40 degrees and the cuts are so clean and precise that there is no damage to the bore. The process does not affect accuracy, decrease velocity or increase the noise level. According to Mag-Na-Port’s Ken Kelly, porting the barrel reduces felt recoil by 15 to 20 percent.

I have carried a J-frame on a regular basis for the better part of 35 years and have several thousands of rounds down range. I shoot mine on a regular basis with duty loads and qualify on annually with my department. I do so for two reasons. First, since I carry my M642 in an off-duty capacity, I want to have confidence in both my equipment and my skills. Secondly, I really like the little guns and enjoy giving them a workout. 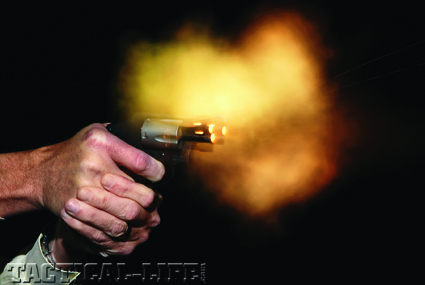 Range Time
Our first trip to the range with the Mag-Na-Ported M442 was scheduled late one afternoon. My photographer accompanied me to take some low light photos to demonstrate the porting of the M442. The first thing I would like to say is these photos (see page 30) have not been Photoshopped with regard to the muzzle blast. The photo shows the large muzzle flash from Remington’s 125-grain +P JHP. This load produced the largest flash of the loads we had on hand and was quite impressive. It should be noted that this load is not designed for law enforcement or personal protection. However, the load was great for illustrating the ports in the barrel. We also shot Remington Golden Sabers, Speer Gold Dots and Federal 110-grain +P+ hollow points. Each of these is a duty or self-defense load and each produced very little muzzle flash.

Recoil is as much about perception as it is about what the hand feels. Some shooters are accustomed to larger calibers and are willing to endure wrist-torquing recoil. However, there are others who would like to avoid “pain” when possible. During the evening, we put around 75 +P and a dozen or so +P+ rounds through the M442. Normally, these rounds would produce a stinging in the web of my hand between the thumb and index finger. To my surprise, I experienced absolutely no stinging, pain, or discomfort and I could have easily shot another 75 or 100 rounds. Felt recoil was very similar to that of a 148-grain target wadcutter load. This Mag-Na-Porting stuff really works.