Smith & Wesson’s Military & Police moniker was first applied over 100 years ago to S&W’s then revolutionary .38 caliber revolver, which was later designated the Model 10. In launching their new line of autopistols, S&W wisely sought to capitalize on the reputation of the most popular DA (double-action) revolver of all time to carry the M&P legacy into the 21st century. 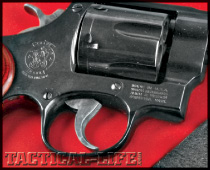 However, this was not the first attempt to attach the M&P nameplate to another S&W handgun. In 1964, S&W introduced the Model 58 .41 Mag M&P revolver, which was heavily promoted as the ultimate police service weapon. Noted handgunners Bill Jordan, Elmer Keith and Skeeter Skelton, all championed the new revolver, but even their strong endorsement ultimately came up short. A few departments adopted the M58 but it never met the company’s expectations and was discontinued in 1977.

The M58 was not produced in large numbers and predictably, has drawn a lot of interest from S&W collectors. At one time, you might be able to find one at a reasonable price, but that is no longer the case. Suffice to say, both shooters and collectors seek after original M58s, and one in pristine condition is likely to command a steep tariff.

A couple of years ago, S&W brought out their Classic line that consisted of discontinued favorites of yesteryear. New to the Classic line is the M58, which is guaranteed to draw a great deal of attention. One can now get a showroom new replica M58 in either blue or nickel.