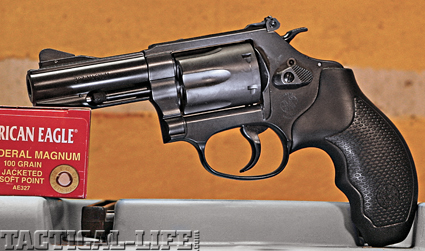 The S&W Model 632 Carry Comp is a six-shot revolver chambered for the .327 Fed Mag cartridge.

During my early police years, I was influenced by seasoned troops in the area of appropriate light armaments. Frankly, when on non-uniform duty or when working the city ambulance on overtime, there’s no need for the 4- to 6-inch revolver with spare ammunition and support gear.

Most veteran officers preferred the Chief’s Special with a 3-inch heavy barrel and square butt, as made by S&W. They were S&W aficionados anyway, but why the 3-inch heavy barrel Chief’s? “It’s a little five-shot gun, like the 2-inch Chief,” I was told. “But it handles like a service-size .38 Special. The sights are better, easier to see than on the little Chief.”

So I tried one, and it was very nice. Eventually I had a pair of them, one blue and one nickel. I installed target triggers and large target-style stocks on them. They shot incredibly well and, from a distance, looked like heavy-barrel Model 10s.

But in the intervening years, they went away. I wish they hadn’t, but I became tied to the shorter barrels due to the need to carry hide-away pistols in pockets or in ankle holsters. Now, another 3-inch J-frame has wandered into my life.

Carry Comp
Consider a 3-inch J-frame—originally, the “.32” frame—chambered in one of the .32 Mag cartridges, six rounds in the cylinder, and the cylinder and frame made of stainless steel. The stainless steel has been rendered black by PVD, a coating process at the molecular level that increases hardness, abrasion resistance and rust resistance. An adjustable rear sight sits over the cylinder window. The 3-inch barrel has a full lug and the rifled .32 caliber portion of the barrel stops short of the end. The last bit of barrel is an expansion chamber with a compensating port on top.

Apparently someone wanted .357 Mag types of velocities in the “ladies caliber” .32. That’s okay, except this ladies’ gun is quite the cannon. After shooting this most recent example for a while, I was thinking that it was worse than an alloy-frame .38 Special. But it only took five rounds of +P .38 to set me right on that issue—the muzzle blast from this “lighter caliber” is sublime.

Like nearly all current-generation S&W revolvers, the Model 632 Carry Comp has a round butt grip frame. The stocks are synthetic and oversized to the frame but nicely fit my hand. The target rear sight is a miniature of the K- and N-micrometer rear sights and is easy to use.

The trigger face is smooth and the finish is the flat black of PVD. Weighing in at around 24.5 ounces, the gun feels good in the hand. 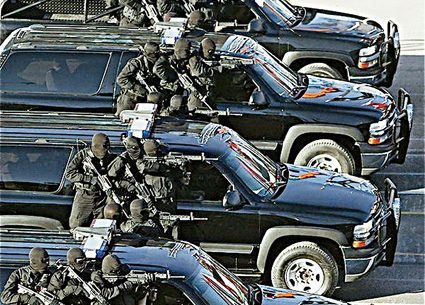