The record is unclear on who coined the term “belly gun” but the term generally refers to a short barrel revolver that is designed for combat at an extremely close range. This was the concept of the Fitz Special, a large bore Colt revolver that was cut down by Colt’s John Fitzgerald. Proponents of the Fitz Specials included veteran gunfighters like Rex Applegate, William Fairbairn, and Charles Askins. As times changed, the large bore revolvers fell out of favor and smaller revolvers, such as the .38 caliber Colt Detective Special and Smith & Wesson Chiefs Special, came into favor.

Over the years, Smith & Wesson has produced J-frames in various calibers and models. However, the quintessential belly gun is the Centennial in .38 Special. The Centennial was first introduced in 1952 to celebrate the 100th birthday of Smith & Wesson. The concealed hammer design gave the little gun a sleek profile that enabled it to be easily carried in a pocket. As popular as the Centennials were, turmoil in Springfield caused Smith to discontinue the line in 1974. 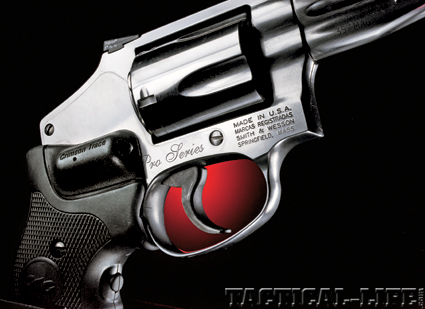 The author equipped the 640 Pro with a set of Crimson Trace Lasergrips for testing. Note the laser housing unit to the rear of the cylinder.

.38 Special +P
Continuing improvement in ammunition has kept the .38 Special a viable option for personal defense for over 100 years. One of the real pioneers in ammunition improvements was Lee Jurras. Jurras founded Super Vel, short for super velocity, in 1963. He introduced the world to lightweight jacketed hollow point bullets that were pushed to unheard of velocities. His .38 Special 110-grain JHP load became a favorite load of many federal agencies. The “rumor” was that the load broke 1,000 feet per second (fps) from the issued Model 60 stainless steel Chiefs Special. 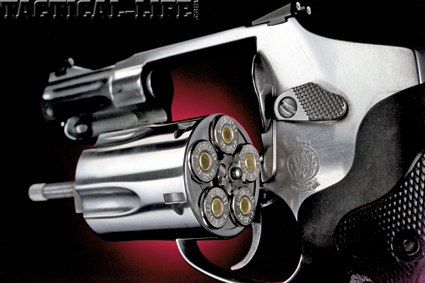 The 640 Pro’s cylinder is relieved so it can accept moon clips, or it can also work without them.