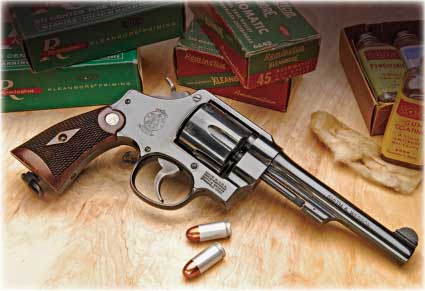 When the United States Armed Forces entered World War I, they quickly recognized that their small arms inventory was grossly inadequate for a prolonged conflict. Six years prior to America’s entry into the war, the military had adopted the Colt 1911 pistol as the official sidearm. Unfortunately, the amount produced did not come close to meeting the demands of the day. Even as more 1911s rolled off the line, the military sought other solutions.

To help meet this deficit, both Colt and Smith & Wesson turned out large-frame revolvers modified to chamber the .45ACP. Colt mated the .45ACP to their New Service revolver while Smith contributed the Hand Ejector 1917. Combined, these firms produced over 300,000 revolvers for the war effort.