0
SHARES
207
VIEWS
Share on FacebookShare on Twitter
For a long time, Smith & Wesson made a revolver that was infrequently found. Sometimes you had to go to a police supply house to find one, but the extra effort was worth it. In my book, the Model 28 was the best bargain, by a big margin, in S&W’s long line of guns. Introduced to 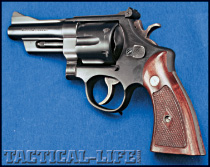 the market in 1954, the Model 28 was also known as the Highway Patrolman. It had a long run in production, but passed from the catalog in 1986. Unlike other models, the Model 28 had an unusual history.

Many things changed with the development and introduction of the .357 Mag, both gun and cartridge, in 1935. For the first time, a shooter could buy a powerful revolver that accurately delivered heavy bullets at high velocities. Following that introduction, the outdoor magazines were full of stories of how the new magnum was used on everything from jaguar to caribou. Somewhat more ominously, we also heard how agents of the FBI were using the guns in their ongoing struggles against gangsters of various stripes.

Seldom has any gun or caliber so quickly achieved a reputation for performance and quality, as did the original .357 Mags. It would have continued to sell as the US economy recovered from the Depression in the late 1930s, but World War II came along in 1941 and the American gun industry turned to military matters.