Smith & Wesson’s Centennial J-frame M&P 340 revolver is well-suited for undercover, back-up or concealed carry, as it is capable of chambering the .38 Special +P as well as the powerful .357 Mag cartridge. Its scandium alloy construction allows for the firing of these hotter loads while keeping the heft of the revolver to a mere 13.3 ounces empty. Additionally, the “hammerless” Centennial design is exceptionally suited for snag-free defensive carry, and the 15-pound DAO (double-action-only) trigger affords the shooter a slightly long, consistent, trigger pull.

Revolver Details
The fit and finish are excellent. The contoured Hogue grips are comfortable and well-rounded, which is a must for concealment and S&W also thoughtfully included a recessed lanyard loop into the butt of the revolver, in deference to its M&P lineage. The XS 24/7 front night sight improves upon the previous J-frame designs where sights were minimal at best. The sight proved to be one of the most outstanding features of the M&P 340. It was easy to locate against a variety of backgrounds as well as during the hours of darkness, where most defensive shooting engagements occur. 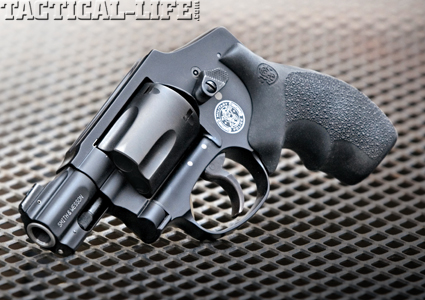 With a barrel measuring less than 2˝, an internal hammer and a lightweight scandium alloy frame, the Smith & Wesson M&P 340 is among the best when it comes to concealed carry reliability. Sovanski Photo

My initial impression of the trigger was that it was not broken in, and I decided to compare it against that of my own M&P 360. Both triggers were comparable in weight and feel, however the M&P 340’s trigger was a stiffer than that of my M&P 360 and the trigger reset on the M&P 340 seemed to be a little weaker. Despite these minor observations, the gun felt good in my hand and pointed naturally.