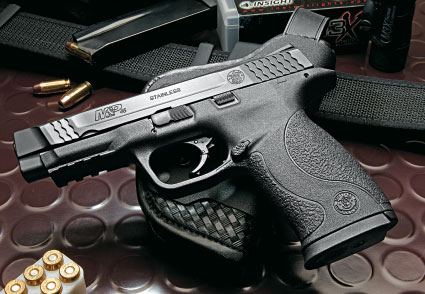 By now, I think most everyone has seen or read about Smith & Wesson’s strong surge to regain dominance of the handgun market. No? Sure you have. The company is doing it with the new S&W M&P autopistol line, which was introduced in 2005. As typified by this article, almost every gun magazine has an article about the pistol in one of its permutations. 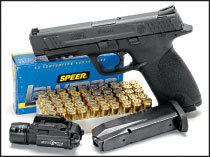 The M&P debuted in caliber .40, followed shortly by a 9mm version, then a compact version and now one in .45ACP. I suspect the .45 was hurried along by the now-suspended U.S. military’s expressed interest in replacing its current sidearm with a .45ACP that wasn’t a 1911 pistol.

The M&P design is the brainchild of Joe Bergeron, S&W Handgun Product Manager who, with his team of Project Engineers Brett Cury, Sean O’Clair and Gary Zukowski, created an autopistol whose features speak to what market forces have indicated are wanted in such a handgun.