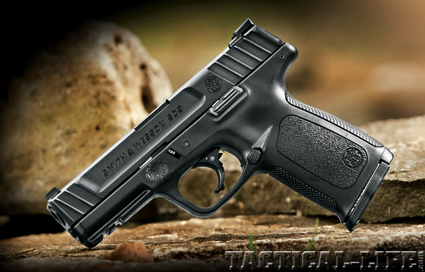 The SD9 from Smith & Wesson combines appealing elements of the company’s Sigma and M&P series in an extremely affordable package.

I don’t know what it was, but there was something about Smith & Wesson’s SD9 (Self Defense 9mm) pistol that appealed to me from the first time I saw photos of it. The SD pistols (SD9 and SD40) were obviously well thought-out. The frame shares a similarity to the S&W Sigma pistol in terms of grip angle, though it feels slimmer. The dustcover rail is of the “universal” format as opposed to the proprietary nature of the Sigma’s rail. There are roughened pads in front of the slots for the takedown lever on both sides of the frame. These are handy to show new shooters where that pesky trigger finger needs to go when the sights aren’t on a target that one can lawfully shoot. As for the pad on the non-trigger finger side, if you shoot with a thumbs-forward grip the support side thumb rests on that pad.

The slide is nicely sculpted with grasping grooves fore and aft. The rear sight is made with a flat on the front to allow slide manipulation using the rear sight against gear or a table. The rear sight also has a pair of painted white dots visible to the shooter. The front sight has a white-outline around the tritium insert. A night sight only up front is a good idea in my judgment. The eye tends to be drawn to the closest bright object—an observation made by fellow writer Dave Spaulding. The focus belongs over the muzzle, which is the most important marker in the close range environment of the diminished light gunfight. While sized similarly to the Glock 19, a “compact” pistol, the SD9 magazine holds 16 rounds. The magazine tubes are metal and the magazines supplied were bright and shiny, as if they’d been nickel-plated. 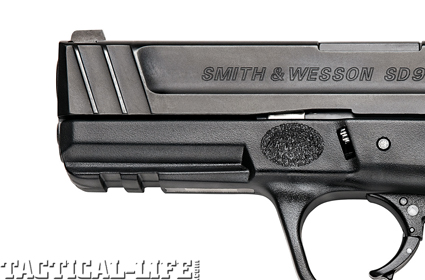 Note the stippled finger positioning recess above the front of the triggerguard, as well as the integrated accessory rail on the frame.

The slide stop is on the left side only and is fairly large, reminiscent of the Sigma unit. Takedown is familiar. First, unload. Remove the magazine and put it aside. Rack the slide briskly and lock the slide open. Check condition visually and physically. Let the slide forward, point it in a safe direction. Check the chamber again, by sight and feel. Then, with the muzzle covering a safe direction press the trigger. The striker will be released and come to rest.

Control the slide with one hand pulling back around ¼ of an inch. Pull down on both sides of the takedown lever—the sawtooth steel protruding from both sides of the frame. Let the slide forward easily and remove it from the front of the frame. Pull the back end of the recoil spring forward and lift up, removing it from the slide. Lift the barrel from the slide. That’s as far as you need to go for regular maintenance. 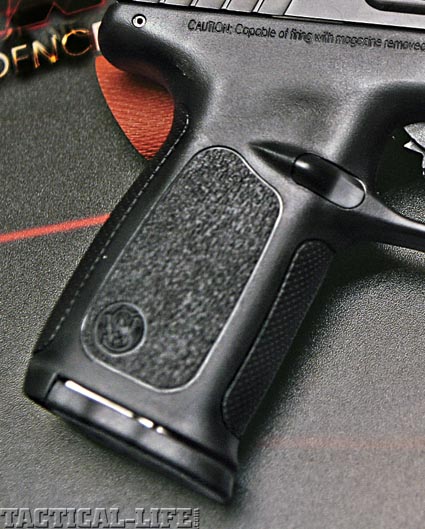 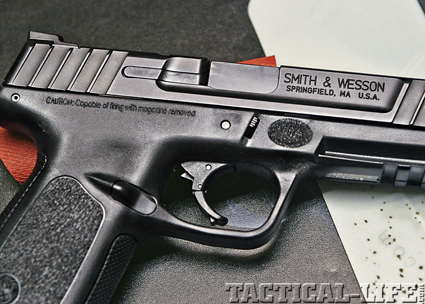 Note the stippled finger positioning recess above the front of the triggerguard, as well as the integrated accessory rail on the frame.

Range Testing
The first 30 rounds out of the gun were fired on the FBI Firearm’s Instructor Bull’s-eye course. I fired these cold, not having fired a gun for several weeks. A believer in using quality ammunition for record firing, I used the contents of a box of Winchester 147-grain Silvertip hollow-points.

I struggled with the long, gritty trigger pull and used the first stage, 10 rounds in ten minutes from 25 yards, to get used to the trigger. I’d dry-fired some over the few days I had the gun before I could get to the range, but that really didn’t take the place of firing ten careful rounds at 25 yards.

Moving up to 15 yards, I fired two strings of 5 shots in 15 seconds. Trigger manipulation was dicey as I tried to find the rhythm to make the hits. Finally, a pair of strings of rapid fire, 5 rounds in 10 seconds, finished up the course.

I didn’t see any hits on the big FBI-IP 1 target and got concerned. I went to pull the target down and saw five bullet holes in the “9” ring. One was so close to the 10-ring, I had to put my magnifying close range glasses to see that it hadn’t cut the ring. First 30 rounds out of the gun, I yielded 295 out of 300 on an instructor-level bull’s eye course—and with a long, gritty trigger. This is an accurate gun. 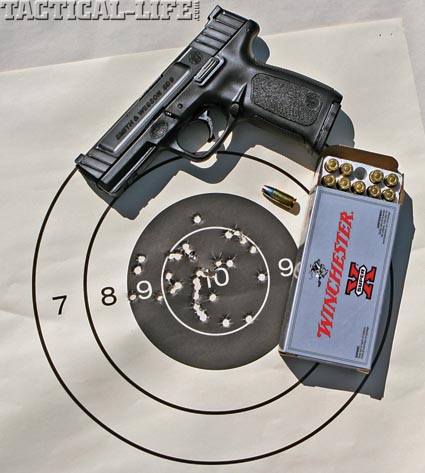 The author was very happy with the inherent accuracy that the SD9 exhibited.

At the end of the course, my recently injured right shoulder was flaring up. I used an “over the car hood” stance to shoot over a bench at 25 yards to check accuracy. As the shoulder flared, my concentration lapsed and the groups show it.

I believe that the SD9 would (and did) shoot a lot better from a seated rest, perhaps shot left-handed. I began to notice that the bulk of groups fired tended to the left side of the target. It was consistent load-to-load, so I concluded it was the sights.

I posted a paper target formed along the lines of the IDPA target and did some handling drills. Despite my condition, I was able to get settled in with the trigger and found the SD9 extremely comfortable to run.

While doing magazine drills, I found that the shiny magazines were slick and I fumbled several times. I remember that the original M&P magazines were shiny and slick, but more recent iterations were matte finished and had a better “grip.”

After a break, I finished up with the Hackathorn course, “The Test.” So named by Larry Vickers due to its unforgiving nature, it requires an NRA B-8 25-yard Timed and Rapid Fire Bull’s-Eye. Post the target, move back to 10 yards. Set your timer to random start with a 10-second par and start from low ready (not High Ready) or from Position Sul. The drill is to put ten hits in the black circle from ten yards in ten seconds.

The objective is to keep all hits in the black. As for scoring, if you make 90% you’re doing well. It’s a great test of gun, trigger control and how “hard” your pistol’s zero is. The S&W SD9, the middle gun between Sigma and M&P, put nine of ten in the black, with a single round just barely out at 8 o’clock. The score: 96/100. 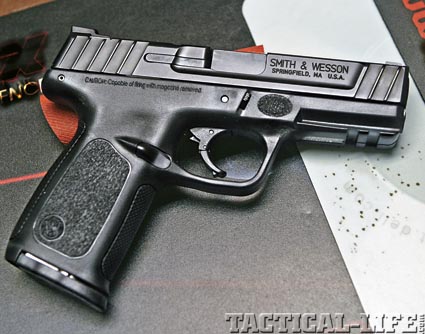 The articulating lower portion of the trigger acts as a “trigger safety.” The author found the trigger pull to be a bit gritty, but manageable. 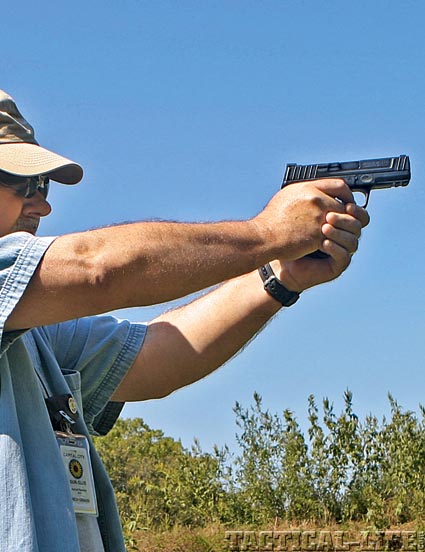 Putting the SD9 through its paces, the author found it to be extremely accurate and comfortable.

Shooting Impressions
I took the gun out to the newly appointed Sheriff’s range and met with retiree Bob Bryant and instructor Cpl Rob Child. They both shot the SD9 and found their groups tended off to the left. “That’s it,” I concluded. “I need to move that rear sight over.”
Rob shook his head. “Wait.” He shot it left-handed as did Bob. Both centered their groups. It was the trigger. The tendency is for the gun to snap left (for a right handed shooter) when the sear breaks. If I clean the trigger up, it’ll center up nicely.

Bob, Rob and I agreed that the gun had an excellent feel. Thoughtful touches made the gun fit the mission so much better than more expensive guns. It’s simple, appearing as if there are fewer parts in the receiver than in the Sigma. The rear sight is wonderfully sculpted, a flat in the front to hook onto things to allow one-handed slide racking. 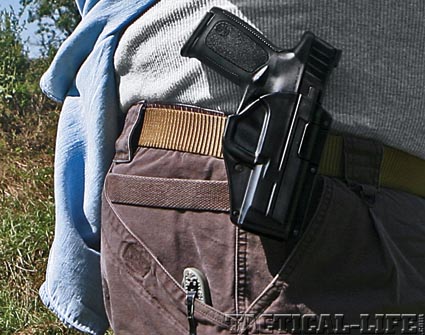 Galco’s Matrix fits the SD series and the retention device created no problems in the draw stroke.

The magazines could use some roughening on the sides. You don’t want to lose it during an emergency reload. The front sight—supposed to be a night sight—is dull on my sample. The vial is apparently empty. After the front sight gets replaced, I’d like to get this back. I’d like to carry and shoot this gun more just to see how durable it is. But it shoots like a house on fire and is a great self-defense gun. Find out more by calling 800-331-0852 or visiting smith-wesson.com. 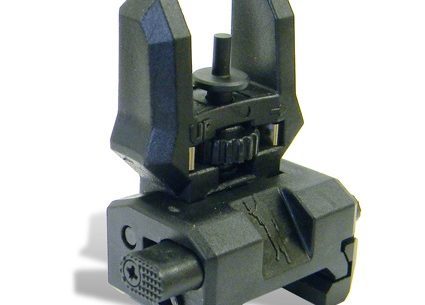