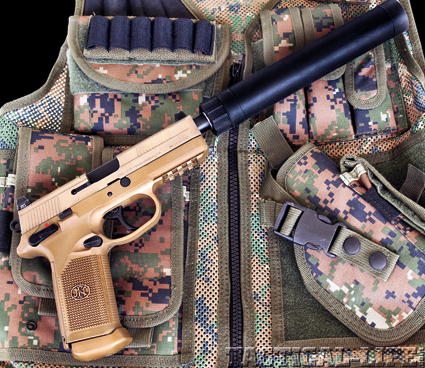 The AAC Ti-Rant .45 Suppressor increases the overall length of the FNP-45 Tactical to 16.61˝ (8.74˝ of which is the Ti-Rant). This slightly tips the gun’s center of balance and also contributes positively to reduced recoil, a byproduct of the silencer.

Wide shot: Bond sidesteps into the shadows and un-holsters his Walther P99, reaches into his pants pocket and retrieves a suppressor.

Tight shot: Bond skillfully threads the suppressor onto the barrel of his gun.

Camera pulls back, follows: Bond begins his pursuit, moving quickly between the pillars in the courtyard of an ancient Italian villa. He spots a member of the opposition, also armed with a suppressed pistol just steps away. Bond silently slips behind another pillar and comes around the corner from his adversary’s blind side…Hushed snap of Bond’s Walther, two shots…Man down. Bond steps into the light. 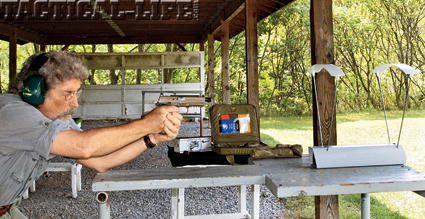 A surprising quirk of suppressors is that they can actually increase velocity. The author found that the American Eagle 230-gr. FMJ measured 756 fps unsuppressed and 767 fps suppressed.

It’s a scene that has been played out in movies for decades and in the real world of espionage, counter intelligence and covert military operations since the early 20th century, but never as poignantly as during World War II, when agents of the United States Office of Strategic Services, (OSS), were issued the newly-designed High Standard HDM .22 LR pistol with integral sound suppressor. OSS Director William J. Donovan made the point of the pistol’s potential by demonstrating its capability in front of President Franklin D. Roosevelt at the White House. As the story goes, Donovan was waved into the Oval Office, where the President was dictating a letter. While Roosevelt finished his message, Donovan turned his back on the President and fired ten rounds into a sandbag he had brought with him. He then told Roosevelt what he had done and handed the still smoking High Standard semi-auto to the astonished President, who himself was no stranger to firearms. The OSS got its guns.

Interestingly, suppressed .22 semi-autos have played a greater role in espionage over the years than most larger-caliber guns with suppressors. 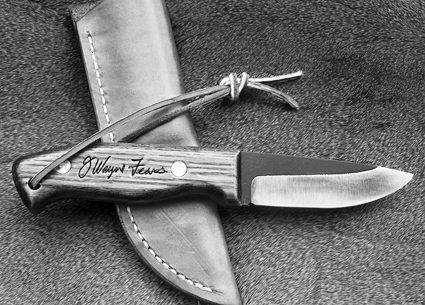 The new J. Wayne Fears signature knife by Pro-Tool is like your favorite hunting...