While the revolver has been replaced by the autoloader as the preferred handgun for personal security and law enforcement, it is certainly far from dead. Many people prefer the simpler manual of arms and ease of use of the revolver. For example, many do not have the required strength to manipulate the spring-loaded slide assembly of the semi-auto and much prefer the simplicity of being able to pop open the cylinder of the revolver to load or unload. Others prefer the long, smooth, shot-to-shot consistent trigger stroke of a finely tuned double-action (DA) revolver over the confusing double-action/single-action (DA/SA) transition on some pistols or the “too-light, too-short” trigger of some striker-fired or SA semi-autos.

Whatever your preference, I think we can all agree that the one thing a pistol has over the revolver is ammunition capacity and ease of reloading—not that the revolver cannot be reloaded quickly. All it takes is a bit of practice and some concentration on the task at hand.

Speedload
When I first entered law enforcement in the 1970’s, I was taught to load my Smith & Wesson Model 19 by hand from dump pouches, which were a molded “box” of leather that was held closed by either a snap or a patch of Velcro. Once the pouch flap was released, the pouch would hinge forward dumping the six contained rounds into the hand. It was then up to the shooter to try and feed the rounds to the index finger and thumb to insert them one at a time into the chambers of the revolver cylinder. It sounded like a great idea at the time, but back then we did not know about the loss of digital dexterity that accompanies armed conflict. Well, maybe we knew but did not understand the concept… 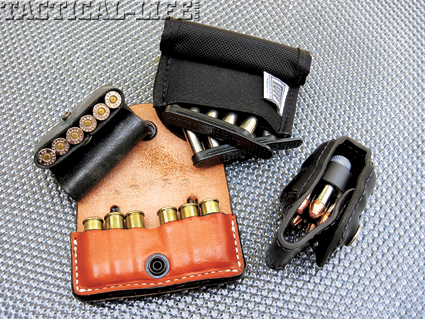 Pouches are available to hold speedloaders and speed strips. Some offer two and three rounds at a time, which make it easier on digital dexterity.

Regardless, better ways were created to reload a revolver quickly with the moon clip being used for revolvers that used pistol cartridges. Due to their lack of a protruding case rim, these rounds would fall into the cylinder and could not be extracted. Thus, the moon clip held them in place and made reloading a snap as all six rounds could be, literally, dropped in place. The speedloader was the next step towards rapid revolver loading and proved to be the best solution for revolver ammunition. These came in a number of variations including molded rubber, push to release and twist to release all of which work well with the major difference being what method of release the end user preferred.

The most recent introduction, and it is by no means a new concept, is the Speed Strip, which is a molded strip of rubber that holds five/six rounds in a straight line versus the round configuration of the speedloader. The chief advantage of the Speed Strip is it will fit any revolver as long as the caliber is correct. In addition the Speed Strip is flat, allowing it to be carried discreetly in a pocket or pouch including the aforementioned dump pouch. The chief disadvantage of the Speed Strip is that only two rounds at a time can be loaded versus the five or six of the speedloader. Like anything else, there are advantages and disadvantages to the various loading devices. 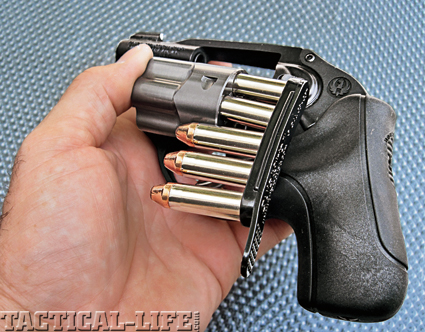 Using a Speed Strip requires the shooter to dump the empties and load two rounds at a time. 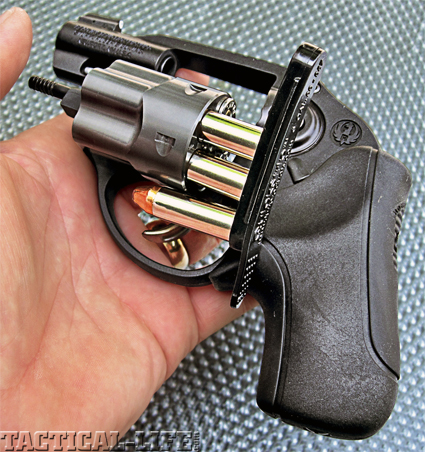 Topping Off
One of the many controversies involving the combative use of the semi-auto is whether or not to “tac-load” the pistol. What is meant here is to remove a partially depleted magazine, retain it and then insert a fresh one. Some argue that this is a waste of time and difficult to accomplish due to the loss of digital dexterity suffered in conflict while others maintain that dropping ammunition that could potentially be used later could be a life-threatening act. What many do not realize is that the “tac-reload” can also be performed with a revolver and if you think that it is difficult with a pistol, wait until you try it with a revolver.

To tac-reload a revolver, you will need to open the cylinder and remove just the spent cartridges. How will you know which are expended? Look for the primers that are dented. To get a grasp on them, you will need to push up on the ejection rod and lift the cartridges so your fingertips can grasp them. The good news here is that the fired cases will have expanded somewhat due to the powder “explosion” and expulsion of the bullet. When you push up on the ejector, the cases will likely stick so by releasing the rod only the spend cases will remain up. This is not guaranteed, but there have been very few times in my revolver experience that this did not happen. This is the easy part of the process, as now you have to get rounds from wherever you are carrying them into the gun—remember, you will be lacking in dexterity due to the “fight or flight” response, so this better be something that you have practiced so you can do it without a great deal of thought.

Carrying loose rounds in your pocket is the worst way to carry spare ammunition, but if this is the method you choose to use, then practice like you carry. The preferred method when trying to top off two or three rounds is the Speed Strip that allows you to load two rounds at a time. There are belt-mounted pouches that are stitched or molded for two rounds at a time and I have seen these used very effectively by cops of the past and these pouches are still available from several holster companies. Another pouch that I like is the Kydex version made by Wyatt Rosch, an instructor at the Tactical Defense Institute in Ohio. Wyatt makes a pouch for both speed strips and speedloaders and they are light, compact and easy to use. They are highly recommended!

Ed Head, a former Border Patrol Agent, recommends having a means of tac-loading as well as speedload available in order to be able to reload without throwing live rounds away. Ed recently told me, “I tell classes that when I was in the Border Patrol and carrying a revolver, we were taught a ‘continuity of fire’ drill where you would fire two, reload two, fire two, reload two, etc. This was why we usually carried a 12-round loop carrier (along with speedloaders) as this method of keeping up a steady firing rate, which was found to be quite useful in many instances on the border where protracted engagements took place, or if you were in need of keeping people pinned down so that others could evade or maneuver.” This comes from a man who worked one of the most dangerous patrol “beats” in the world, and is also an excellent training drill for those who carry a revolver regularly. 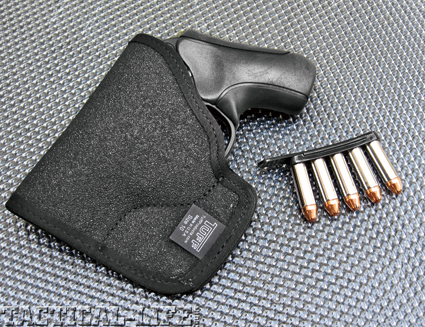 Other Issues
At this point you might be thinking, “At what point do I tac-reload versus just reloading the revolver?” This will be a choice that each of us should make ahead of time and settle in your mind. For me, there must be at least two rounds in the gun to top off a revolver. I’m just not going to go through the complex motor process for one round, but that is my choice. My suggestion is to take a few dummy training rounds and work through various topping off reload drills and see what works best for you. As you will quickly see, performing this reload is not as easy as it sounds, so have a set round count for when you will and will not do it. If you have forgotten how many rounds you have fired, I would suggest that you do not take the time to look, just speed reload the revolver and get back to your adversary.