The “M” stands for more, or that is what the advertisement said when Springfield Armory introduced the new XDM pistol in mid-2008. Usually, new models are introduced at the SHOT Show in January of each year, but Springfield surprised the entire market by introducing the new series of pistols in mid-year. Most surprising of all, there was not even a rumor of the new pistol until about a week before the release. 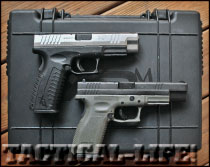 It was such a tightly held secret that when I asked if something new was in the works, I was told to wait and see. They would not even give me a hint as to what was new. It seemed that the news broke when some demonstrations were held for the distributors and within a week, the M’s were on the shelves of the dealers. Springfield pulled one over on all of us.

Once the news broke I called to get the story on the new pistol. The first thing that Springfield wanted to make clear was the new XDM series is designed to complement and not replace the existing XD series of pistols. The original XDs continue to be popular and sales continue to challenge production. This is especially true with the .45ACP pistols.

However, Springfield saw the market potential for a new and improved XD that would be even more competitive against other manufacturers. So, they took the XD and did more. The first production run of Ms was in .40 and I decided to pass and wait for the 9mm version. Several months passed, but when the 9mm version finally arrived, I found a real winner that I think has found a permanent home.

While the M shares a few internal parts with the original XD, it is a completely new pistol from the ground up. The M retains the best of the XD features while improving the ergonomics and mechanical operations. As with the original models, the new guns feature an ambidextrous magazine release, grip safety, and loaded chamber and cocked striker indicators.

Unique Trigger
The indicators are visual as well as tactile, allowing the operator to assess the condition of the pistol in low/no light environments. I remembered having to press check my pistol by feel during a SureFire Low-Light school and realized how convenient this feature is. The XDM also retains the Ultra Safety Assurance Trigger System that guards against accidental discharge by locking the trigger in a forward position until direct rearward pressure is applied.

The frame is a completely new design that incorporates several features that make the XDM more user friendly than its predecessor. The contour of the grip has been modified and the side of the grip has been scalloped. This shortens the trigger reach, improves access to the magazine release, and allows for a higher and firmer purchase on the pistol.

The Mega-Lock Texture on the front strap extends around to the side of the frame and reminds me of an off-road mud tire. The grooves provide for enhanced control both vertically and horizontally. It is almost like the pistol is gripping you, not the other way around. As with other recent polymer pistols, the M has an interchangeable backstrap that allows the user to customize the grip to their hand. Each pistol comes with a small, medium, and large backstrap.

Accessory Rail
The dust cover has the obligatory accessory rail for optional lights and lasers. One of the common complaints of the XD series is the amount of slack and reset distance with the trigger. The M has a redesigned fire control system that reduces both the trigger take-up and reset distance. The trigger pull on my sample measured right at 7 pounds with just short of 0.75 of an inch reset.

The slide has been re-contoured from the original square block to a tapered pyramid shape. This reduces weight, width and assists in re-holstering. The cocking serrations on the slide have been enlarged and deepened for a better grasp. This is especially welcome when operating the XDM in foul weather or while wearing gloves. I have had my hand slip several times while running my .45ACP XD. Springfield has replaced the flat blade rear sight with a large, low profile swept rear sight.

My sample was equipped with three non-Tritium dots, but fiber optic light tubes are available as well as tritium. One improvement is that all XD and XDM slides are now finished with Melonite to provide a hard, corrosion-resistant finish. The user will notice that the hammer-forged 4.5-inch barrel on the 9mm M is marked as being “Match” grade. It is no secret that Springfield has some of the best factory barrels in the industry and the M takes advantage of this. Finally, and most impressive, the 9mm XDM has an all steel magazine with a capacity of 19 rounds. Now that is more!

As with other XDs, the XDM is shipped in a hard case that is form fitted for the pistol; two backstraps, two magazines, polymer holster and double magazine pouch, magazine loading tool and the obligatory lock. The case is far nicer than the standard plastic box that so many pistols come in these days. While not quite as tough, it comes close to a Pelican or Hardigg case. It will last the life of the pistol and provides security for both home and travel.

One concern that both civilians and law enforcement personnel have shared for many years is the need to pull the trigger to field strip the pistol. This is a design feature that is shared by several polymer pistols, to include the original XD. The M has eliminated this requirement. To field strip the M, the slide is locked to the rear and the disassembly lever is rotated clockwise to a 12 o’clock position.

Special Holsters
With the 9mm version of the XDM being brand new, I was interested to see if it would fit any of my existing holsters. I found that the XDM would fit and work in a BlackHawk SERPA for a Glock 17. The fit was not perfect and there were some minor movements but the SERPA locked and released properly.

If time allowed, I would have contacted Rick Palmer at Center Of Mass. I tested two of Palmer’s holsters for the Custom Shop XD .45 Compact article that was in Guns & Weapons for Law Enforcement’s October 2008 issue. His designs are well thought out and the execution very clean. It is obvious that Palmer carries a pistol on a regular basis because his holsters work.

Range Time
A trip to the range was both fun and uneventful. The XDM ran with a variety of loads and we experienced no malfunctions related to the pistol or ammunition. On two occasions, the slide failed to lock to the rear after the last round. The slide stop on the XD is just above the thumb knuckle, which is further to the rear than on a 1911. I found that my thumb-high hold on the M was impeding the slide stop. A change in my grip cured the problem.

I must admit that I gave in and found myself using the magazine loader that comes with all XD series pistols. It takes a while to load 19 rounds into a magazine and the magazine spring is compressed into about 0.75-of-an-inch space when the magazine is fully loaded. So call me a sissy if you want; at least I could still feel my thumbs at the end of the day.

We were able to run several hundred rounds of standard velocity 124-grain FMJ, Federal’s hot 124-grain +P+ Hydra Shok, Speer Gold Dot, and Remington Golden Saber through the M. It not only ate everything we fed it, but it was polite in doing so. I have to say that you almost get tired of pulling the trigger before you come to the end of 20 rounds. The ergonomics of the grip, combined with the slide and barrel design, made the M a joy to shoot.

Muzzle flip was very minor even when using the hot +P+ loads. Much like other polymer pistols, the hotter the ammo, the better the M ran. After trying all three backstraps, I settled on the medium size insert as being the best fit for my hand. Our test version was the bi-tone model with a black frame and stainless slide. This makes an exceptionally handsome pistol that attracted attention from several other shooters.

The top of the XDM slide bears the Springfield Armory crest with the country of manufacture, Croatia, at the bottom of the crest. I must give credit to the folks at Springfield Armory for seeing the potential of the XD platform and bringing this excellent pistol to the US market.

By every measure, the XD series of pistols has been a success. Springfield has taken the original 9mm service pistol and expanded the line into four calibers, 9mm, .40, .357SIG and .45ACP; three different sizes, compact, service, and tactical and more combinations of size and caliber than I can count.

Final Notes
The XD, and now the XDM are giving the rest of the polymer gang a run for their money. Many shooters have found the .45ACP XDs have a smaller grip and significantly better ergonomics than many of the “other guys.” With the new M platform, this can only get better. Both models are excellent candidates for personal defense, IDPA (International Defensive Pistol Association) competition, as well as duty pistols for security and law enforcement functions.

The M does stand for more. Not just more bullets but more features, more models, and more calibers! I hope that the compact version of the 9mm and the big bore .45 are on the drawing board soon. I was going to call and ask but I knew that the answer would only be “wait and see!”