Springfield’s XD series pistols trace their history to the introduction of the Croatian HS 2000. The original XD was in 9mm, but .40 S&W and .45ACP versions soon followed. While the XD has yet to achieve law enforcement use on par with Glock pistols, a number of officers in my little department and adjacent jurisdictions have purchased XDs in both .40 and .45 caliber out of their own pocket to replace their department-issued pistols. Bottom line is that once most gun-savvy cops try an XD, they like it! Springfield has now brought the popular XD to a new level with the XDM.

The fact that the latest iteration of the XD was first chambered in .40 S&W indicates that Springfield may be going to go after the law enforcement market in a serious way since most departments issue service pistols in that caliber. Moreover, as a law enforcement duty pistol the XDM has much to offer. The XDM is an evolutionary, not revolutionary modification of the successful original XD, which continues to be produced, but there are a number of features that set Springfield’s latest apart from the original.

Gun Details
The original XD was designed by a Croatian engineering team and introduced in the mid 1990s in Europe in 9mm as the HS 2000. The XD series pistols started with a successful base platform, and then combined concepts and ideas from other pistols to make an outstanding personal defense firearm. Like the originals, the XDM series has a polymer frame, a 1911-style grip safety, a Glock-style trigger safety and an internal striker block safety. One feature we especially appreciate is that the trigger safety is contoured to match the curve of the trigger itself, so that it doesn’t “bite” into the finger during a long day’s shooting. Not only will the pistol not fire if the grip safety is not depressed, the slide cannot be moved to the rear either.

The barrel lockup and disassembly is modified Browning with a chamber hood that locks into the ejection port. XD pistols are striker fired, and have a visible and tactile loaded chamber indicator that is obvious to the eye and easily felt in the dark. The loaded chamber indicator sits on top of the slide and gives a visible and tactile indicator of the XDM’s loaded status. Because of its location and the distance it protrudes above the slide when a cartridge is in the chamber, we believe that the XDM’s loaded chamber indicator, like those of earlier XDs, is the best in the industry. The striker protrudes at the rear of the slide when the pistol is cocked, giving visible and tactile status of whether or not the pistol is cocked. The ambidextrous magazine release is also one of the best on the market—a push in either direction drops the magazine. XDMs come with a MIL-STD-1913 rail molded into the dust cover for mounting flashlights or lasers. Standard three dot sights are dovetailed into the frame, and the dovetails are the same size as those for a SIG SAUER, so aftermarket sights are readily available and easily interchangeable. The frame rails and all internal metal parts are pinned into the frame. This allows damaged parts to be replaced by just driving out pins and dropping in the new parts. XDMs are currently available in 9mm and .40 S&W, come in various configurations, including black, OD green and Bi-Tone finishes like our test pistol.

Our test XDM came in a lockable hard plastic case, with a spare magazine polymer holster, mag carrier and loading tool, and cable lock. The slide is a matte silver finish and is slightly tapered towards the top. Our test XDM has a 4.5-inch cold hammer forged match grade barrel, and black polymer frame with all controls also dull black. An OD green frame is optional. Fit and finish of our XDM left nothing to be desired. There are no sharp edges anywhere, checkering on both the front and back strap, as well as grooves on the dust cover, squared off triggerguards and molded thumb rests are crisp. The XDM has cocking grooves at both the front and the rear of the slide.

The stainless steel magazines are well made and drop free with a push on either side of the ambidextrous magazine release. In fact, there is enough spring pressure on the magazine that it will pop out, even if the pistol isn’t held butt down. Even with the muzzle up, the magazine drops free. The XDM .40 significantly increases the magazine capacity over the original XD, upping the ante from 12 to 16 rounds of .40 S&W ammo. With a round in the chamber, the XDM has a whopping 17 rounds of .40 ammo on tap. Remarkably, the XDM’s grip isn’t noticeably larger than the original. If one carries two spare mags that totals out to 49 rounds—one round shy of an entire box! If that isn’t enough to get you through a gunfight, you might consider throwing the pistol at the bad guy!

Another XDM feature is replaceable backstraps that can accommodate most any size hands, although we found the backstrap that came with our test XDM to be just about ideal and our hands are fairly large. Backstraps can easily be replaced by tapping out the retaining roll pin using a punch and swapping backstraps until the ideal size is determined. To remove the backstrap once the pin is out, it is simply tipped up from the bottom to about a 45-degree angle and lifted off. Replacement is the reverse—pivot the new backstrap into place, align the holes and tap the pin back into place using a brass or plastic hammer, just not a steel hammer because it will ruin the pin. The backstrap retaining pin doubles as a lanyard loop.

The XDM grips are aggressively checkered on the front and sides, so hanging onto the pistol shouldn’t be an issue, even with wet hands. Grip angle is almost identical to the classic 1911, which is the best pointing handgun grip angle, ever.

Although the XDM’s configuration is different from the original, we tried our test pistol in Safariland duty and carry holsters and the fit was as well as the original XDs, so XDM buyers shouldn’t have any concerns over holster availability. That said, the XDM comes with a polymer holster, mag carrier and mag loader.

XDM disassembly is even more straightforward than the original, which required that the trigger be pulled after first locking the slide to the rear and removing the magazine, thus clearing the pistol. Like the original XDs, the XDM requires that the slide be locked back to rotate the takedown lever, but once the lever is rotated to the “up” position allowing the slide to be slid off to the front, it isn’t necessary to pull the trigger. The slide just comes off. Even though the original XD disassembly procedure mandated locking the slide to the rear before rotating the takedown lever, the trigger still had to be pulled and pulling as a part of the disassembly process is a step in the wrong direction as far as we are concerned.

Shooting Impressions
The XDM was a pleasure to shoot. Its grip angle is very close to the 1911 grip angle, and feels much like an M1911A1. The checkering on the XDM’s front and back strap made it easy to control and follow-up shots were fast and accurate. We especially liked the thumb rests on each side of the pistol, which provide a positive location for the shooter’s thumb almost like that of a match pistol.

The XDM’s trigger pull averaged 6.5 pounds with a short takeup, a bit of creep, and a crisp break. The trigger resets to the single-action position, so the takeup is eliminated unless the shooter takes his or her finger completely off the trigger. The XDM is quick to reload, as the magazine well has a wide bevel on its edges and the double stack magazines are tapered to a single cartridge at the top. The slide release is easily manipulated by a right-handed shooter without changing the grip.

Test ammunition was Black Hills, Extreme Shock and Hornady. We fired approximately 50 rounds through the pistol for function test prior to accuracy testing. There were no stoppages of any kind, confirming our experience with earlier XD pistols in both .40 and .45 caliber. Every XD we have ever fired, regardless of caliber was 100 percent reliable. We fired the XDM .40 for accuracy from 15 yards offhand using a two-hand grip. We test at 15 rather than the more common 25 yards because this is more realistic in terms of a combat situation. Average for five groups of five shots was 2.75 inches. The XDM literally tore the center out of the silhouette target during our simulated gun fight.

Final Notes
All in all, Springfield Armory’s The XDM .40 is very impressive and we believe that it makes an ideal personal defense pistol. For those in the market for a high quality, dependable, user-friendly pistol, they would do well to consider the Springfield Armory XDM. 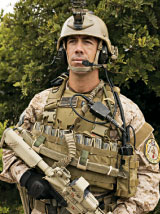