Most things aren’t worth doing unless you are willing to do them well, and Springfield Armory’s line of XD pistols is a clear example of a very worthwhile concept exceptionally executed. While the .40 S&W cartridge has grown exponentially in popularity, some find its bark and its bite a bit uncomfortable. However, Springfield’s V-10 porting proves to be the music that soothes this beast and makes it a real gentleman’s sidearm.

Gun Details
The XD Service Model with V-10 porting in .40 S&W caliber is a polymer-framed, recoil-operated, Ultra Safety Assurance action trigger system-equipped, striker-fired, semi-automatic pistol. It is based on the HS2000, designed and manufactured in Croatia and now the standard issue pistol for that nation’s military and police forces. Springfield Armory, recognizing the gun’s potential, licensed it for sale in the U.S. and renamed it the XD, or “X-treme Duty” in 2002. Since then, this pistol has received multiple industry awards. 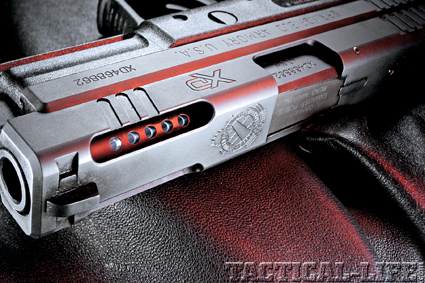 The V-10’s porting provides five small holes on either side of the top of the barrel that direct expanding gasses upward to mitigate recoil.

Among its many award-winning features are the safeties, the most distinctive of which is its grip safety that prevents the pistol from firing unless it is fully depressed. The grip safety also prevents the slide from moving back unless it is depressed—something to keep in mind when trying to lock the action open or otherwise work the slide. Some models are also available with a thumb safety. 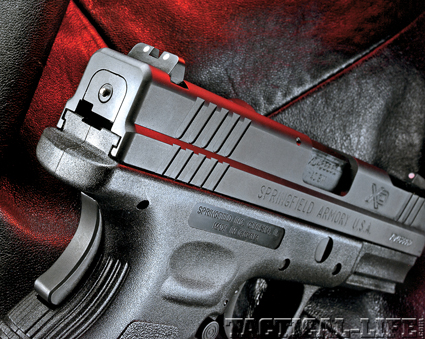 A grip safety is a welcome feature, as is the pistol’s striker indicator, which is located on the rear face of the slide on the XD Service V-10.