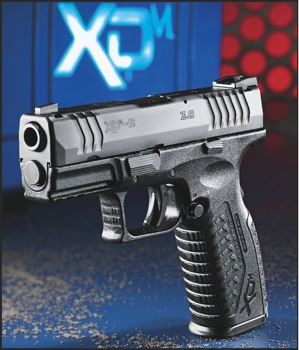 The Springfield Armory XD pistol has enjoyed a great deal of popularity over the last few years both in the law enforcement and civilian world. The owner of the store I share some space with is also a firearms instructor for the Community College police academy. He has commented a number of times about how often this pistol is used by new recruits in the academy. Most who use this pistol just seem to really like it. Many agencies have added it to their list of approved pistols, and if given a choice, many officers would switch at their own expense. Having spent the last 20 years in that profession, it is a testament to the value of a pistol when officers spend their own money to buy one.

For all its growing popularity in the police world it enjoys even greater popularity in the concealed carry and self-defense market. It is pretty rare to spend any time at a civilian range and not see a few of these pistols being used. There are at least two that I can recall that appear regularly at my local USPSA club shoots in the production class, and it is very popular at IDPA shoots. The line has grown to include just about every caliber imaginable for a pistol. Barrel lengths run from 3-inch sub-compact models to 5-inch models in tactical, and even custom designs. They pretty much cover anything you may want in a concealed carry, self-defense, duty, or match pistol.

(M) Factor
The latest innovations to the XD line are the (M) pistols. There are a number of differences to these pistols; some are  subtle, while others are obvious. The grooves on the slide are deeper and longer. The frame has been nicely contoured and the “Mega-Lock” texture on the grips is pretty aggressive. That is new for polymer pistols and an improvement. Long having preferred aggressive checkering on my pistols, the “pebbling” one normally sees is just not enough especially in cold weather. The barrel is match grade and so is the trigger. The reset is short as is the travel making for a quick second shot and excellent trigger control. The frame is coated in Melonite, which is resistant to corrosion, chemicals and abuse. The ambidextrous magazine release has been modified to fit most hands without having to alter your grip and multiple backstrap panels are provided to allow for all hand sizes. All in all, the (M) factor upgrades are not only aesthetically pleasing and ergonomic, but also practical.

Gun Details
The newest in the line is the “3.8 short barrel.” For the most part this would be considered a Commander-sized pistol. The 3.8-inch barrel is shorter but it is mounted to a normal sized grip maintaining the high capacity, a capacity that in 9mm is significant at 20 total rounds. It also includes some changes to the slide serrations that make them even more aggressive. For many that is a matter of personal preference, but certainly come in handy in mud, snow, or sweat. Living in a winter climate where gloves are a must, they are pretty valuable. It also includes an accessory rail on the front of the pistol for lights or other accessories you may need.

The pistol provided for testing had a black finish that was quite nice looking, especially for a polymer pistol. The pistol comes in a nice rugged carrying case and includes a holster, dual magazine pouch, differently sized grip panels, and the politically required lock and expended cartridge. There were two magazines provided, and jumping on my recurring theme, there should be three. It seems especially true when you are given a double magazine pouch in the package. But, at least there are two so it can go to concealed carry work immediately.

The holster and magazine pouch are of the polymer variety and suitable for range use or concealed carry. After handling the pistol for a while it just kind of grows on you. It points well, and the white dot sights that came with this pistol were easy to pick up. The rear sight is of a no snag design suitable for concealed carry. The trigger is smooth and shorter than one generally sees on these pistols. The reset is pretty short as well. Spending most of my pistol time with a single-action it often takes a bit for me to make the transition. That was not the case with this pistol. Although the rated trigger weight is 5 to 7 pounds, the design seems to lend itself to feeling lighter. After a bit of dry firing it was time to move onto some practical testing.

Testing began with a number of draw strokes to see if anything snagged on my clothing. No problems seemed to present themselves here. During this and the live fire testing both an outside-the-pants pancake holster and an inside-the-pants holster were used. Drawing the pistol was easy and smooth, and even with the inside-the-pants carry no issues were presented.

Range Time
The range day was a clear and crisp 9 degrees to start, so gloves were in order. By the end of the session it made it all the way up to 16 degrees. To change things up a bit a set of normal work gloves along with some dress gloves were used. The fancy tactical gloves are cool, but most people do not go out that way. If you are going to carry concealed in the winter it is a good idea to practice with the gloves you use. If they do not work, it may be time to change gloves, or make certain your pistol has a triggerguard that accommodates them. Truth is most folks use their regular winter gloves or in my case some tried and true deerskin work-gloves when going out in the cold. These gloves have served me well for years and are the first I grab in most any weather condition. Once some dry firing was accomplished with the gloves to make certain they were safe, the shooting commenced.

The majority of the live fire was accomplished with 115- and 124-grain FMJ ammunition, all of it was factory loads. The XDM 3.8 is quite pleasant to shoot with factory loadings and very accurate, keeping everything inside a 3-inch circle out to 15 yards. The trigger is very predictable and there was little to no transition time needed moving from the 1911. 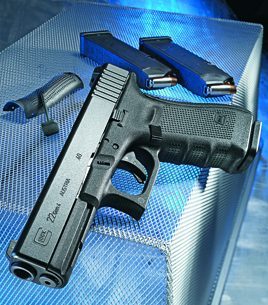