The retail price for Springfield Armory’s XDm 3.8 Compact is $705.

Versatility and multi-tasking—watchwords in our world today as the economic downturn has forced government, business and individuals to become more cost conscious and budget-minded. When the “purse strings” are pulled tight any item that can offer dual use is sure to attract attention. Springfield Armory has done just that recently with the introduction of the XDM 3.8 Compact. 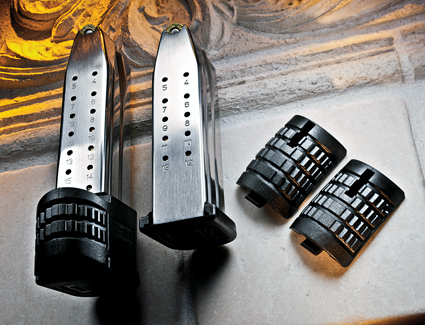 The magazine on the left features the X-Tension, which holds a substanial 19 rounds, while the one on the right holds 13 rounds.

The XD family of handguns was introduced in 2001. As of press time, this family has since grown to encompass 16 different versions of the XD in Sub-Compact, Compact, Service, Ported, and Tactical platforms, plus 6 variations of the XDM—the most recent being the Compact Model. XD models differ in caliber (9mm, .357 SIG, .40 S&W, and .45 ACP), barrel length (3.01, 3.8, 4.05, 4.5, and 5.01 inches), frame size, and then there are 6 different finishes. Previous XDM models mated the standard-sized frame to slides with either a 4.5- or 3.8-inch barrel; in the case of the new Compact version you get the shorter slide with the 3.8-inch barrel coupled with the Compact frame. 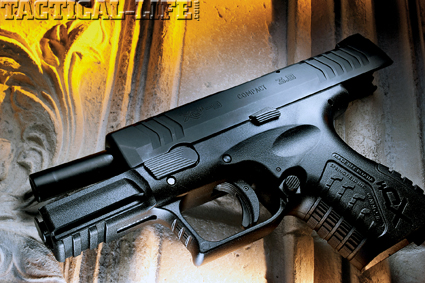 The XDM Compact’s takedown lever is located above the triggerguard and does not require for the trigger to be pulled to engage.

Gun Details
What makes this a dual-use handgun is the magazine. The XDM Compact is presently offered only in 9mm, but expect a .40 caliber to be available by the time this article is printed. The pistol comes with two types of magazines—one has a baseplate that is flush with the bottom of the Compact grip frame and has a capacity of 13 cartridges, the other is a full-size capacity magazine with the XDM Gear Mag X-Tension that not only gives it a 19-round capacity, but also transforms the XDM pistol into a full-size XDM 3.8 configuration. That means you have a compact, but high-capacity pistol for concealed carry/off-duty use and with a simple magazine change, you have a handgun suitable for uniform carry or one for the nightstand that provides plenty of firepower for home defense. 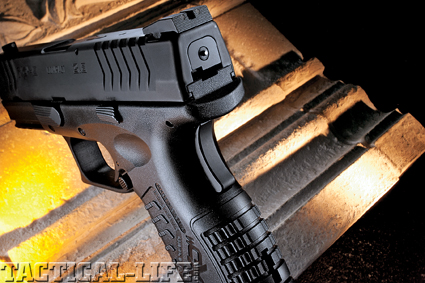 The striker status indicator, which can be seen protruding from the rear of the slide, shows if the pistol is cocked and ready to fire.

For a little background, you have the original XD Model (circa 2001), which is a striker-fired, polymer-framed, high-capacity semi-automatic pistol with innovations like a USA (Ultra Safety Assurance) Trigger System and grip safety. So what is this XDM all about? The (M) literally means that you are getting the XD pistol with “More”—Springfield Armory refers to it as the (M) Factor. You get a slightly modified XD frame with a grip angle that provides optimal “Point & Shoot Ergonomics” coupled with contouring that makes the grip feel like it is grabbing you. The grip frame itself has mega-lock texture; like a molded-in tread pattern for improved handgun control in rapid fire. Add to this Mould-Tru backstraps that come in three different sizes, which allows you to tailor the depth of the grip frame to your hand. A maximum reach, ambidextrous magazine release makes operation with virtually any hand size easy without the need to twist the hand or adjust from the shooting grip.

Ahead of the triggerguard is a multi-adjust 3-position Picatinny rail system that accepts various tactical lights and lasers. All XDM models have a minimal reset trigger with shorter travel and reset for faster and more accurate follow-up shots. The XDM Mag X-Tension makes for a mega-capacity magazine, which means in 9mm you get 19+1 rounds.

Moving upward on the pistol, the slide has major grasp serrations front and rear, to help prevent slippage when loading/unloading—especially if the slide or your hands are wet. Nestled inside the slide is a match-grade barrel that is hammer-forged with conventional 6-groove, right-hand twist rifling and muzzle crown. Mate this with main-focus sights—sturdy, low-profile, all-steel 3-dot sights dovetailed into the slide and serrated to reduce glare. Slide finish is a tough, non-reflective Melonite, which is both hard and corrosion-resistant. While not (M) Factors, I would mention that in the realm of safety the XDM Compact has a loaded chamber indicator and a striker status indicator that provide both visual and tactile verification that the pistol is loaded and cocked. 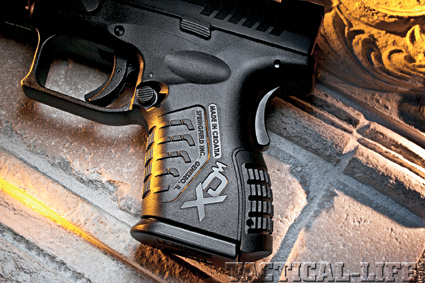 The 13-round flush-fitting magazine makes for a very compact and concealable pistol. Note the Mould-Tru replaceable backstrap.

A final (M) would be minimal error disassembly. Unlike a lot of striker-fired pistols the XDM Series does not require that you pull the trigger, releasing the striker as part of the takedown process. This is intended to help prevent negligent discharges of the firearm.

I disassembled the XDM Compact to clean out any packing grease or excess lubricant and gave it a thorough inspection from “stem to stern.” This is a Croatian-made firearm and those folks across the pond evidently know what they are doing. The quality of manufacture was first-rate; metal-to-metal, metal-to-polymer, the fit and finish were flawless and I saw no blemishes externally or internally during my examination. Curves were curved, flats flat, but there were no sharp edges to catch on clothes, leather or skin.

Inside my case I found a 13- and 19-round magazine, two Mould-Tru backstraps (sized small and large), and two magazine X-Tensions so you can convert regular length magazines to XDM Compact configuration. There was also a Kydex paddle-type holster that is screw-adjustable for tension, along with a Kydex open-top, double magazine pouch with slots in the back to accommodate up to a 1¾-inch belt. It also has a tension screw and on either side is a built-in Picatinny rail. Then there’s a flex-cable padlock you can run down the barrel of the pistol for added safety, a bore cleaning brush, and owners manual. 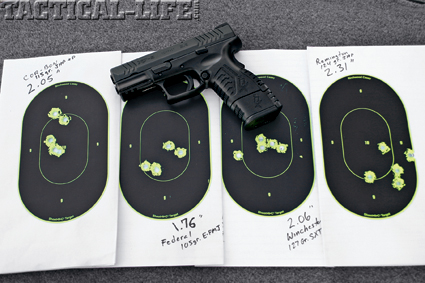 Shown are the best groups fired during the accuracy testing of the pistol.

Range Time
As ammunition has been somewhat scarce I had to dig deep in my ammunition locker and came up with five different 9mm loads from five different makers to use in the XDM Compact. I found some CorBon 115-grain JHP +P cartridges, Federal 105-grain Expanding FMJ rounds, brown box PMC 115-grain FMJ stuff, some vintage Remington 124-grain JHP ammo, and Winchester LE-Only Ranger 127-grain SXT-JHP +P+ loads. Right near the ammunition is my shelf with targets and I grabbed a package or Birchwood Casey oval-shaped Shoot-N-C self-adhesive targets. I like to stick these on the back of the old-fashioned wide computer paper, which I recycle as targets. I also had some new plastic reduced-size silhouette targets they’d sent me and as I was going to be shooting in an indoor range, I thought they would work out rather well.

At the range I ran my first group of targets down to the 45-foot mark and settled at the bench to do an accuracy evaluation. Striker-fired semi-automatic pistols will never have a trigger pull comparable to a Gold Cup 1911A1, but the pull and pull weight on the Springfield XDM Compact wasn’t too bad. The factory literature states the pull runs from 5.5 to 7.7 pounds. I was shooting four, five-shot groups with each of the CorBon, Federal, Remington, and Winchester cartridges and the first target is generally the worst as I see where the round is hitting relative to my point-of-aim and adjust accordingly. I discovered the sights to be very well regulated, even with the lightweight bullet of the Federal load. In fact the 9mm Federal Personal Protection cartridge with the expanding FMJ bullet gave me the day’s tightest group at 1.76 inches. CorBon barely beat Winchester with a 2.05-inch group opposed to one that measured 2.06 inches and the older Remington classic design 124-grain JHP came in with a 2.31 inches cluster.

For the accuracy testing I used the XDM Gear extended Mega Magazine with its 19-round capacity. I’ll have to admit that it was a struggle getting the last 4 to 5 rounds in that magazine and I could not get the magazine loader to work for me. It was nice however to fire the four 5-shot groups without having to change magazines. I was happy with the medium-sized Mould-Tru backstrap that the pistol was fitted with and saw no reason to change it. I had no malfunctions from the bench and the Mega-Lock texture on the grip sides, front and rear backstraps offered real control from shot to shot. Recoil and muzzle flip even with the hottest loads did not become a factor during testing. The sights were easy to see, even in the somewhat reduced light of the indoor range. 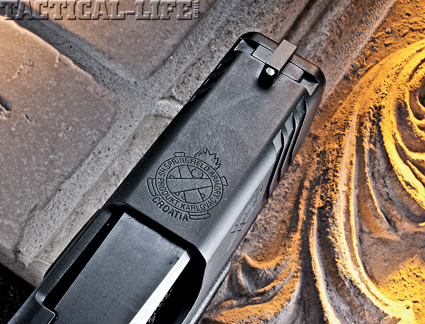 Springfield had sent me two extra 13-round magazines, so I decided to do my practical shooting evaluation with the XDM Compact in the off-duty mode. I put on the Kydex paddle holster and magazine pouch and loaded up all three magazines with the PMC 115-grain FMJ cartridges. I put a few of them on a bull’s-eye target to see where they were hitting and then topped off my magazine. The 30-round combat course I routinely use starts with strong and support-hand only shooting at 3 yards, but I reduced the distance as I was using the smaller silhouette target. Shooting from a point-shoulder position, first with the right hand and then the left, looking over the top of the sights, I put all 12 shots near the center and did a fast reload. The target was run down to the equivalent of 7 yards and I drew and fired 2 rounds center-mass using the sights; then I repeated this twice more. Next at the same distance I fired two center-mass and one to the head; a body-armor drill—this was also repeated. The target was then placed at what would normally be 15 yards and I fired two shots left and two right-hand barricade and then two more from the right side kneeling. I went through this exercise twice—my first target being my best of the two.

Final Notes
Although I did not have the extra gripping surface provided by the longer duty-type magazine and extension, the shorter 13-round magazine and reduced size grip did not bother me in the least. I found the sights very easy to acquire rapidly and the XDM 3.8 Compact functioned perfectly. There were no malfunctions of any kind, empty brass was ejected well clear of the shooter, magazines dropped out effortlessly, and the handgun’s controls were all easy to reach and use. The grip safety never became a factor in the handgun’s function and worked just fine. My factory-supplied holster and magazine pouch also worked well and I would have no qualms about using this equipment for my carry, off-duty or plainclothes needs. This new XDM Compact 9mm from Springfield Armory has earned my endorsement.