132
SHARES
54
VIEWS
Share on FacebookShare on Twitter
The .45 ACP (top) and .40 S&W variants of the XDM-5.25 now join the already successful 9mm competition model with outstanding features to satisfy the most demanding shooters.

We sometimes have a tendency to use words too casually, without fully considering what they imply. This is especially the case with words like “perfect” or “incontrovertible,” which carry the weight of immutability. The original Springfield Armory XD pistol was, and is, an outstanding pistol, but it would have been a mistake to say that it could never be improved. 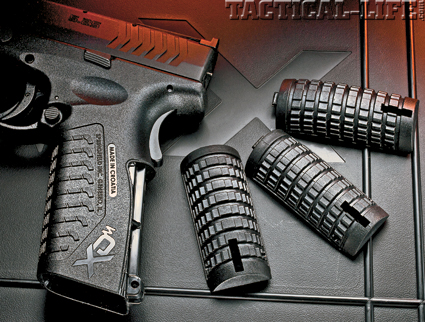 The modular XDm series comes with an interchangeable backstrap system that allows the user to customize the fit of the grip to their hand.

The next generation, XDM, featured many significant enhancements, but lest anyone consider using the term “perfect” just yet, Springfield is again upping the ante. The new XDM-5.25 Competition Series, previously available in 9mm, now comes in .45 ACP and .40 S&W, and is once again pushing the standards of excellence even further. 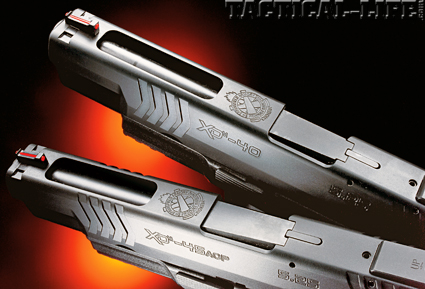 Like the original XD, this pistol is a polymer-framed, recoil-operated, striker-fired autopistol based on the HS2000. It is designed and manufactured in Croatia to Springfield’s demanding standards, serving as the standard-issue pistol for that nation’s military and police forces.

Gun Details
As the name implies, the Competition Series sports a 5.25-inch long barrel and with that comes a long 7.25-inch sight radius. A longer sight radius allows the shooter’s eye to better visually track front sight movement that can throw off your shots, thereby allowing for better sight correction, hold, and accuracy. The longer barrel also contributes to increased muzzle velocity and potential accuracy. 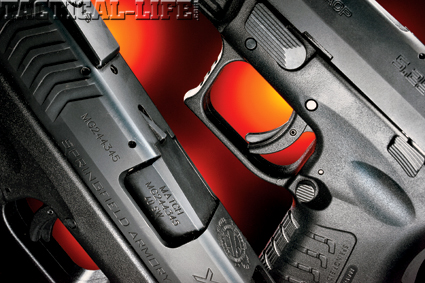 Both of the Springfield XDM Competition pistols broke cleanly at 7 pounds on the two-stage trigger. Note the large ejection port of the pistol.