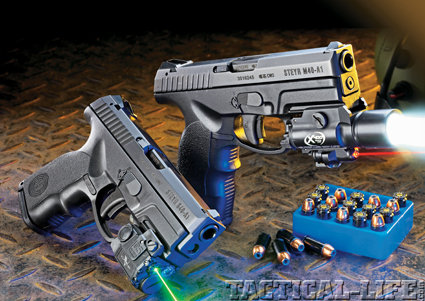 The full-size M40-A1 (right) is shown equipped with a SureFire X400 light/laser combo, while the compact S40-A1 (left) is fitted out with a Viridian C5 green laser/light combo.

In 2001, I had an opportunity to evaluate the Steyr M9 9mm pistol. First released in 1999, it caused quite a stir with its racy lines and space-age sights. The M developed a small but loyal following over the next few years. The M40, in 40 S&W and the M357 in .357 SIG followed the 9mm model. In many ways, the M series was similar to the Steyr AUG. Shooters either loved it or hated it with very few having no opinion. The M9 shot well and held its own with the Glock 17 and S&W (Walther) 99. A compact series was later introduced with the “S” designation. Unfortunately, Steyr had some rough days ahead of them and the M and AUG became casualties. The company underwent a series of changes in ownership and leadership. The good news is that Steyr USA is back with the reintroduction of the AUG and now the A1 series. 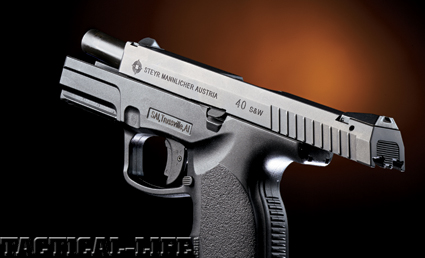 The M40-A1’s 4˝ barrel is cold-hammer forged with conventional rifling, and has a fully supported chamber in all calibers.

In August 2010, Steyr announced the new M-A1 and compact S-A1 pistols. The new models feature several significant design upgrades from the original pistols. The A1 series continues to be a polymer framed, double-action-only, striker-fired pistol that is designed for military, law enforcement, and the civilian market and is available in 9mm or .40. I recently had an opportunity to try out a full-size M40-A1 and compact S40-A1 for myself. The new models have retained the distinctive profile of the original design. The angle of the grip to the frame is 111 degrees. When combined with the high grip backstrap,the design places the center axis of the bore lower than with other designs. The design also gives the M a very natural point of aim and reduced recoil and muzzle rise. 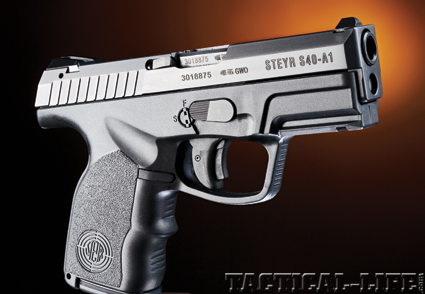 The S40-A1 is the compact variant of the design. Operationally, it is the same as its full-size M40-A1 sibling.

The M-A1 pistols have a double trigger, or trigger within a trigger, that functions as an integrated safety. The trigger design has been upgraded to improve the feel over the older pistols—and the crunch and grit of the old trigger has been replaced with a smoother and lighter pull. This has been accomplished by redesigning the firing pin linkage and installing a roller in the firing pin channel. 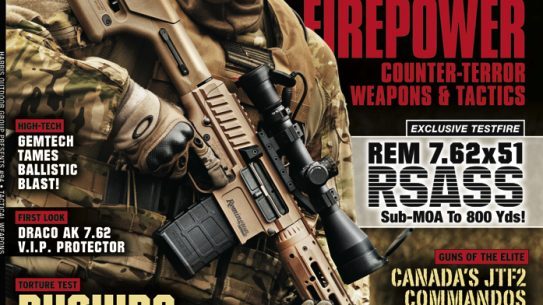 The full-size M40-A1 (right) is shown equipped with a SureFire X400 light/laser combo, while…