0
SHARES
13
VIEWS
Share on FacebookShare on Twitter
The outstanding ergonomics of the Steyr Arms C9-A1 pistol make it one gun that can satisfy numerous roles for a variety of shooters.

The list of big-name firearms manufacturers that have been in continuous operation since the era of the American Civil War is not particularly long, but the few names that make the list are immediately recognizable to shooters worldwide. One of them is Austrian gunmaker Steyr Arms, also known as Steyr-Mannlicher.

Known best for its now-classic bullpup rifle, the AUG, the company was also an early developer of innovative autoloading semi-automatic pistols. So it is only fitting that Steyr continues to introduce new improvements in pistol design for American shooters. Based on the original M9 pistol, introduced in 1999, the newly improved Steyr Arms C9-A1 is a synthetic polymer-framed, striker-fired, recoil-operated, semiautomatic, in 9mm with 15+1 capacity. 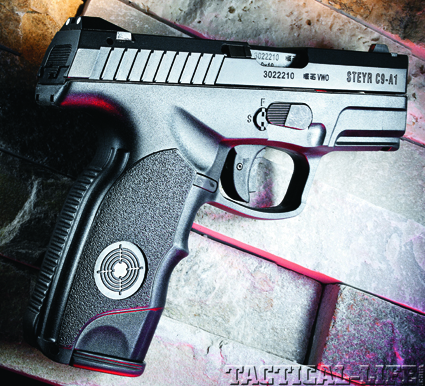 The push button above the trigger of the C9-A1, which releases the takedown lever to disassemble the pistol, also functions as an internal lock for the action with the provided key.

I teach a lot of beginning shooters, and they all want the same thing—a gun that is good for personal protection in the home but could also fit their needs for concealed carry. Let’s face it, guns aren’t all that cheap to most folks and first time shooters don’t often buy multiple guns all at once. No one gun can be all things to all people but most of these first time buyers also want one gun that everyone in the family can comfortably use. In this regard the Steyr really stands out thanks to its ergonomics and other thoughtful touches. 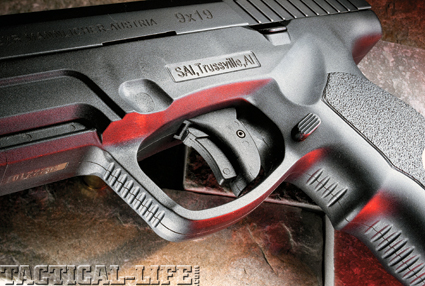