0
SHARES
153
VIEWS
Share on FacebookShare on Twitter
The Shadow was designed with input from Texas undercover officers, who desired a thin, compact, lightweight, reliable pistol in a serious caliber.

When the undercover narcotics officers of Texas approached STI with their ideas and input, STI turned out a pistol designed specifically to suit their needs—concealability and functionality. When officers began their quest, they really liked the Escort, but had concerns with the sights. Since most of their encounters were at spitting distance, they wanted to do away with the sights altogether. Administrators wanted sights for liability reasons, and the compromise that STI engineered was to put night sights on the pistol but lower them into the slide and add the sight channel cut, to reduce the potential of snagging. The beavertail tang was bobbed for the same reasons. Featuring an all-black finish, the Shadow was born, resulting in a law enforcement-inspired design just about perfect for civilian CCW carry. 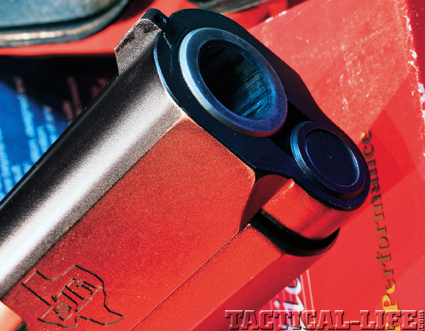 Gun Details
The Shadow is basically a 3-inch barreled 1911 on an Officer’s sized frame. The 4140 carbon steel slide is machined from extruded bar stock with rear cocking serrations. It is cut with STI’s standard oversized ejection port, and employs the old-school “internal” extractor. Heinie “Straight Eight” two-dot tritium fixed night sights are dovetailed fore and aft, and a sight channel is cut lengthwise atop the slide. 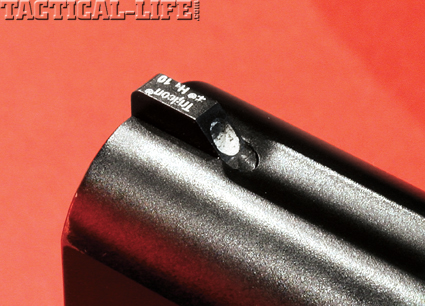 The Shadow features a set of Heinie Straight Eight tritium dot sights. Note the deep channel behind the front sight unit in the slide’s top.

The slide rides on an aluminum alloy frame with a “chain link” treatment cut into the frontstrap to add texture to the gripping surface. The triggerguard features a high undercut to facilitate a high hold on the pistol, in conjunction with STI’s own bobbed high-rise, blued, knuckle relief beavertail grip safety. This beavertail has a proprietary cut which narrows the tang to optimize a high hold further still, as well as a memory bump to ensure disengagement with a high-thumb hold. The Shadow’s magazine well is machine-beveled to smooth reloads, and the mainspring housing is a flat polymer 25 lines-per-inch (lpi) checkered unit.