In production for almost 100 years, John Browning’s Model 1911 is the most successful autoloading pistol of all time. Over time, the 1911 has morphed and evolved into some more sophisticated variants, but the basic design remains just as it was a century ago. It would be difficult to come up with any other mechanical innovation from that era that has not been eclipsed by more modern technology. 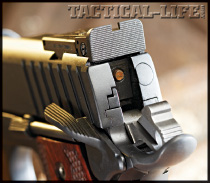 The 1911 is often associated with the .45 ACP cartridge and this combo goes together like ham and eggs. Other chamberings have been introduced; some meeting with success while others fell to the wayside. Perhaps the most successful has been the .38 Super. Introduced in 1929, the Super quickly developed a following with lawmen who favored its superior penetrating ability. Fifty years later, it won over the practical shooting crowd where the 1911 .38 Super dominated the game circuit for several years. Unlike other cartridges, the .38 Super tends to work very well in a properly set-up 1911.

The 9mm is the most popular pistol cartridge in the world and it was inevitable that it found its way into the 1911. Many different variations of the 1911 have been chambered for the 9mm over the last 50 years, but I wouldn’t necessarily categorize them as an overwhelming success. Full size, properly maintained 1911s in .45 ACP are pretty reliable machines. On the other hand, many 9mm copies tend to be as finicky, as the shorter case plays havoc with system reliability. If your game gun chokes, you will lose. The stakes are so much higher if you are using a less than reliable gun to protect your hide.

Up until fairly recently, a 9mm 1911 hasn’t generated a great deal of interest. But if we could get this old classic to get up and run, we might be on to something. Recoil is much lighter than a .45 ACP and we could boost total capacity by a round or two. The short, light trigger of the 1911 also helps many shooters perform to the highest possible standard. Did I mention that 9mm ammunition is also considerably less expensive than .45 ACP?