0
SHARES
3
VIEWS
Share on FacebookShare on Twitter
The world of the armed citizen is absolutely rife with bad advice that can get decent people physically hurt, sent to prison, or plunged into poverty after an adverse civil court judgment. The last two issues of Combat Handguns have carried in this column some of those myths that were treated in a short, thumbnail sketch way because it takes years to give each one a full article. We’ll conclude that series now with three more such myths. 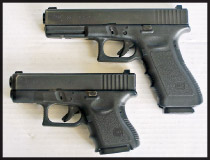 MYTH ONE
This canard holds, “You shouldn’t even think about liability! That will get you killed! Look at things like the Deputy Dinkheller shooting!”

Case One
The young deputy who died so tragically in this incident, caught on the dashcam of his patrol car, found himself making that deadly “routine stop” on an emotionally disturbed man who happened to be a Vietnam combat veteran. Things escalated, and when the man became assaultive, the deputy drew his expanding baton, which he was not able to use with effect. The suspect strode purposefully back to his car, and withdrew and loaded a .30 caliber M-1 carbine.