0
SHARES
1
VIEWS
Share on FacebookShare on Twitter
The Advanced Close-Range Gunfighting Class teaches a more non-traditional approach to gunfighting skills. The course is based on the notion that movement while shooting and basic combat accuracy is key to survival.

Going to the range and firing a box of shells may be relaxing and improves basic shooting skills, but it does little to prepare you for an actual life-or-death situation. I recently attended Suarez International’s Advanced Close-Range Gunfighting two-day course, which certainly reinforced my belief that quality training is critical. This course is straightforward shooting with an appropriate emphasis on solid hits at all ranges, rather than gilt-edge accuracy.

This Suarez International training is listed as advanced for a reason, as it builds upon what you have already trained in other pistol classes. While the first morning was spent polishing up pistol shooting fundamentals, the remainder of the two days were used to refine skills to a higher level. The course is chock full of methods for increasing speed and accuracy during a personal defense encounter. 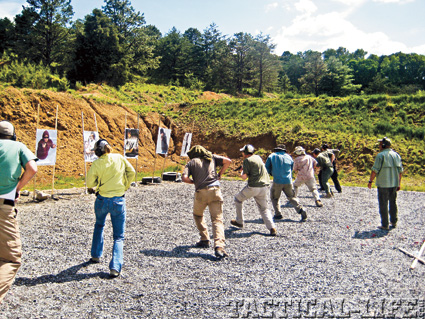 To help train you to not freeze in place during a deadly encounter, the Suarez International class focused on moving (in this case toward the threat) while drawing and shooting.