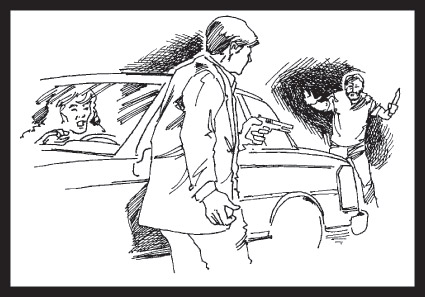 Two weeks ago while driving on the highway, I was about to take the exit to my home when a car passed me on the shoulder, hitting my right side mirror. Naturaly, that gave me a jolt, so I signaled him with my headlights while honking my horn. All of a sudden, he slammed on the brakes, causing me to almost crash into him.

At the last moment I decided to overtake the car on the shoulder to avoid a collision. That’s when the driver tried to run me off the road and into the crash barrier. I skidded but quickly regained control without hitting anything.

My heart missed a couple of beats, and I was steaming mad to have been put in such a dangerous situation. When the driver decided to overtake me again, I yelled at him and motioned for him to take it easy. He got in front of me again and started hitting his brakes, trying to make me crash into him.

We took the same exit off the highway and he stayed in front of me, driving slowly and trying to cut me off. He seemed to be trying to guess where I was going, and I didn’t mind because I was really interested in learning the reason for his behavior and getting close enough to write down the make and model of the car, and the license plate number. Anyway, I wasn’t thinking straight because of the shock of almost having had a serious accident.

I signaled for the driver to stop his car, and my girlfriend noticed that he was on the phone and that his passenger was giving me the finger and waving a beer bottle as though he was going to beat me with it. Before I could speak the words, “Uh oh, this is bad ….” they pulled over and got out of the car. I did too, because I wanted to talk to the driver and see what his problem was. Suddenly, a huge guy, more than 6 feet tall and about 260 pounds came out of a nearby house.

Apparently, the driver had called his friend, and they had lured me into a trap, probably to beat me up. I told my girlfriend to stay in the car with the doors locked, the engine running and to call the police if needed.
The big guy told me to be gone “or else.” When I told him I had no business with him but wanted to speak with his friend, he threatened to stab me. Then he lifted his shirt and moved to grab the hilt of a kitchen knife. My girlfriend was yelling from the car, “Knife! Knife! Watch out, he has a knife!”

As fast as I could, I drew my SIG SAUER, which I always carry in a paddle holster on my right side. I ordered all three men, the large man and the two occupants of the car, to lay on the ground, face down. In a couple of minutes the town police arrived. All three men were arrested for disorderly conduct and menacing (threatening physical violence).

I learned a valuable lesson: Never doubt your doubts. I had a funny feeling when I first looked at the driver. I never should have gotten into the argument and put my girlfriend in danger. Luckily, everything ended well, thanks to the psychological and firearms training I received while working as an armed security officer a few years ago.

I’m not a violent person, and I strongly believe that avoidance is the best option. I’m writing this to tell everyone how quickly things can go bad. Please use my experience as a lesson, and take your training and your personal safety seriously. Train hard to fight easy.
—KG, NY

Two weeks ago while driving on the highway, I was about to take the…