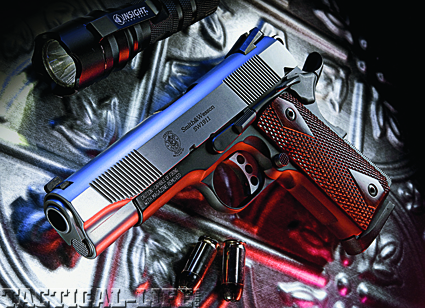 “Smith & Wesson offers a full line of M1911’s but, when it comes to concealed carry, its SW1911 Compact ES may come closest to perfection.”

While it was conceived as a duty sidearm, almost from its introduction the M1911 was coveted as a potential concealed carry piece. While it was lauded for its power and reliability, the warhorse was also flat. Granted, it was large and heavy, but if those issues could somehow be overcome, you’d have an incredibly versatile pistol that would be as at home under a jacket as it was in a Sam Browne duty belt.

While gunsmiths, professional and otherwise, experimented with modifications, it was improvements in aluminum alloys and the continued market demand for a concealed carry-friendly M1911 that finally resulted in a factory-produced concealment pistol. The introduction of an aluminum-frame model with a slide shortened to 4.25 inches from the standard 5-inch, and dubbed the Commander proved immediately and enormously popular. A later model with an even shorter slide and reduced grip frame was called the Officer’s model, and found a ready market as well.

It wasn’t long that many of those handling each came to a distressing conclusion: both were good, but neither was ideal. Sure, the Commander-length slide was a bit faster to draw and handled well. However, it really wasn’t that much more concealable than a standard full-size gun. The reason was, when it comes to concealment, the size of a gun’s butt is much more important than the length of its slide. The Commander-length slide was short enough to conceal the gun under most jackets, but the butt, being unchanged from the original, protruded as much as the original.

On the other hand, the Officer’s model had a nicely reduced grip frame with a shorter butt, but its slide was extremely short. The slide’s practical concealability was only marginally better than that of a Commander. Moreover, you gave up sight radius, desirable muzzle-heaviness and some muzzle velocity with such a short barrel on a Officer’s model.

It was quickly realized that if you combined a Commander upper with an alloy Officer’s model lower, you’d have something close to the perfect concealed carry M1911. Custom gunsmiths began doing just that. Soon, in limited runs, factory pistols were offered as the CCO or Concealed Carry Officer’s model.
Now, as the popularity of licensed concealed carry has exploded, it seems the idea has really gained traction. Currently, a host of M1911 manufacturers are offering their version of the CCO.

ATK Small Caliber Systems donates $15,000 for The Wall That Heals memorial in Missouri.