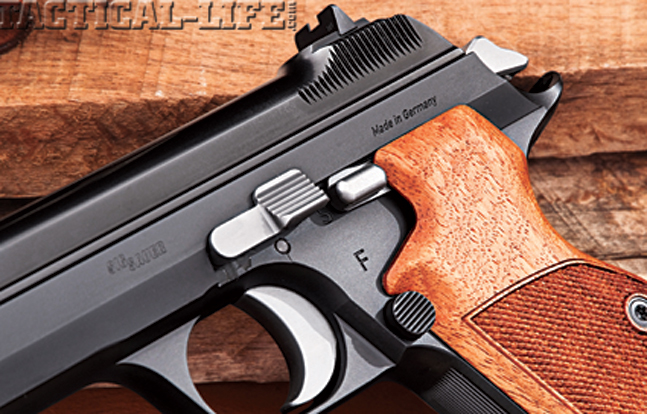 SIG is a very old company. The Schweizerische Industrie-Gesellschaft began as a wagon maker in 1853, expanded into railcar manufacturing and in 1860, along with the formal adoption of the SIG acronym, entered the arms manufacturing business with a handsome contract from the Swiss Federal Ministry of Defense to build 30,000 Prelaz-Burnand muzzleloading rifles. Thus SIG began a history of arms making that has lasted for over 150 years, but the Swiss manufacturer didn’t become famous for producing handguns for almost another century. That didn’t happen until the late 1930s, when SIG licensed a French design variation of the Browning titling barrel system modified by Swiss designer Charles Gabriel Petter and used for the French military Modèle 1935 pistol. The French semi-automatic had one drawback, it was chambered in 7.65mm and the Swiss wanted a 9x19mm Parabellum. Enter SIG. 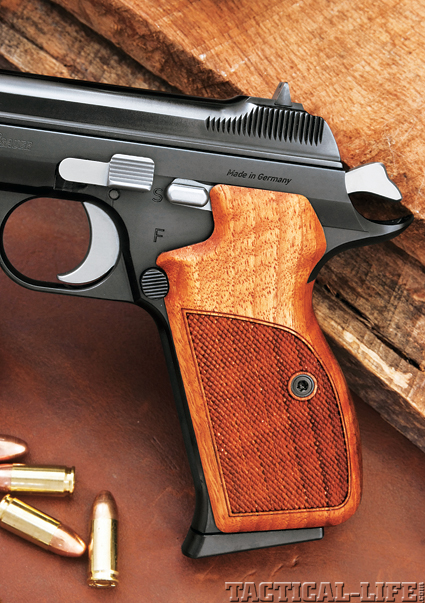 Among several improvements in the P210 Legend is the use of a grip frame mounted mag release, a larger thumb safety, and an extended beavertail.

Petter had improved on Browning’s 1911 design by dispensing with the barrel bushing (as would be done on the Browning Hi-Power) and machining the slide in a single piece. Petter actually combined a number of 1930’s designs into the Modèle 1935 including a variation of the Soviet Tokarev, which contained a single assembly for the hammer and lock that could be easily removed for cleaning and repair. After licensing the Petter design SIG’s engineers modified it further by eliminating the 1911-style swivel link and utilizing a camming barrel lug (like the new Browning Hi-Power). SIG also adopted spring-loaded extractors based on the Tokarev. When it was completed the SIG was named the Model SP47/8 for its year of manufacture and cartridge capacity. It was adopted by the Swiss Military as the Pistole 49, becoming the forerunner of the commercial version we know today as the Sig Sauer P210. 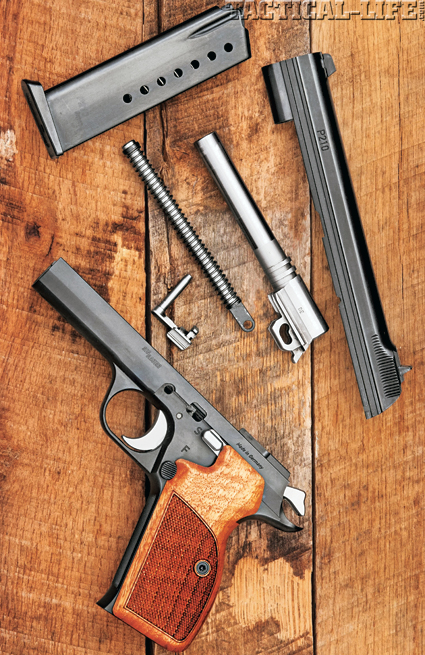 The Sig Sauer is easy to fieldstrip and reveals its mixed heritage of Colt Model 1911 and Browning Hi-Power internal characteristics.

The Browning influence in the P210 is subtle at best. The SIG is a more robust looking pistol that doesn’t quite have the “classic” proportions of the Hi-Power. It has a more streamlined, military bearing, set off by a large thumb safety and slide release, a crescent moon-shaped trigger, heavily buttressed triggerguard, and large, hand-filling wooden grips. The original design, circa 1947, used a spring-tensioned magazine release at the heel of the grip, a very European design.

One of the most distinguishing characteristics of the gun throughout its 65-year history is the rear of the slide, which is domed. The design elevates the rear sights and also provides a surface area for the rear slide serrations. This is the only means of grasping the slide as it mostly rides inside the frame, rather than over it as on the Colt 1911. The Sig Sauer frame cradles the slide, which uses an inverted rail design channeled to run the entire length of the frame1. This very solid design has provided the P210 with unmatched accuracy in its class, but it also makes working the slide to chamber the first round or clear the action a bit more demanding. 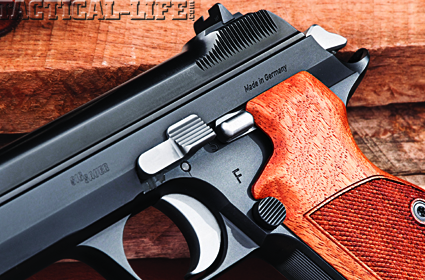 Note the domed rear of the slide, which elevates the rear sights and also provides a surface area for the rear slide serrations

SIG and Sig Sauer are two different sides of the same coin. The models P210 through P210-8, covering a period from 1947 to 2007, were all manufactured by SIG. The Swiss military production run of P49 pistols which started with serial number A100001 in September of 1949, concluded around 1975 at serial number A213110. The civilian line, however, has continued on over the last 30 years due to the P210’s exceptional accuracy and the manufacturing of target and competition models. The current P210 Legend is, however, the first to bear the Sig Sauer name on its slide and to be manufactured in Germany instead of Switzerland. That amalgam of companies, SIG and J.P. Sauer & Sohn, first came about in the 1970s when the two famous armsmakers (J.P. Sauer dating back to 1751), joined together to manufacture the Sig P220, which has since become one of the most revered law enforcement and military sidearms in the world.

Since 2000, SIG and Sig Sauer have been separate entities with Sig Sauer (formerly Sig Arms) manufacturing the entire range of Sig pistols, rifles, and military weapons, while J.P. Sauer & Sohn continues to manufacture its own line of bolt action and semi-automatic rifles. (For a more detailed examination of the SIG family see the 32nd Edition Blue Book of Gun Values). Sig Sauer also maintains U.S. sales and manufacturing operations in Exeter, New Hampshire.

The P210 was one of the finest handguns of its time, and as with many of its 20th century contemporaries like the Colt Model 1911 and Browning Hi-Power, the Sig is still a very practical and serviceable handgun for the 21st century. The changes that have been made to the original P210 in creating the Legend are secondary to retaining its finest characteristics. The Legend has the same overall appearance and precision design as its ancestors, coupled with a new carbon steel slide machined from solid billet steel, an extended beavertail added to the heavy-style carbon steel frame, an improved manual safety, internal drop safety, a frame-mounted magazine release2, and custom wood grips. The Legend is a seamless blend of old and new, making this 9x19mm classic a pricey $2,399 with the standard fixed sights. 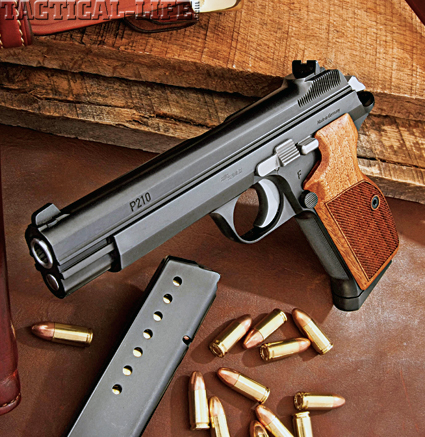 A perfect blend of past and present, the new Sig Sauer P210 Legend combines the best attributes of the original 1947 SIG design with a few modern updates.

As a military gun, holsters for the P210 were designed around practical field applications and followed contemporary designs of the era, which meant flap holsters to provide maximum protection for the gun. On the civilian side, flap holsters were also popular in the 1940s but with better styling than the military types. Post WWII era Swiss style holsters for the P210 were also flap style, some with a combination of shoulder strap and belt loop allowing them to be worn with the shoulder strap across a uniform jacket and secured at the waist with a traditional Sam Browne belt. These were generally larger holsters than the U.S. G.I. styles produced for the M1911.

For the Sig Sauer P210 Legend, John Bianchi has copied both a traditional European style flap holster with shoulder strap and a Sam Browne pattern waist belt. This very traditional European outfit provides a secure carry for the costly SIG P210 that is suited to its post-World War II heritage.

Weighing a hefty 37.4 ounces the P210 is no lightweight, which contributes to its excellent balance in the hand, recoil management, and accuracy. A great deal of Swiss shooting is spent on the target range where the P210 is equally at home. The Sig Sauer uses a two-stage trigger: a long take up followed by a crisp release. Most of the P210 hammer and sear engagement is released during the trigger take up, and can be seen in a slight rearward movement of the hammer as the trigger is pulled. With a single stage trigger, like a Model 1911, there is no movement. The short second stage moves the sear to release the hammer. The P210’s large crescent moon trigger pivots on a pin to reduce lateral play and ensure smooth engagement of the sear. Take up on the test gun was only 1/8th inch with an average trigger pull of 2.8 pounds. This level of precision helps justify the P210’s price. It is, for all intents and purposes, an out-of-the-box target pistol.

The Sig Sauer P210 Legend is sighted in at the factory at a distance of 25 meters (27.5 yards) and supplied with a signed factory test target. The guns must deliver a five-shot group that measures 50mm (2.0 inches) or less. I decided to try and do at least that good using a duplicate of the Sig Sauer test target and Winchester 115-grain FJM 9mm ammunition.

It took almost 100 rounds pouring out of the Sig Sauer’s 4.7-inch barrel at 1,210 feet per second (fps) average to get the P210 sorted out and get comfortable with the gun’s light trigger pull. All tests were done from a rested position using a two-handed hold. Once the sight picture was firmly established at a distance of 82.5 feet (25 meters), tight groups were relatively consistent and the best five shot target ended up coming close to the factory test target with five rounds measuring 1.88 inches center-to-center.

The P210 is a masterfully crafted handgun as well suited to the target range as the battlefield. It is extremely easy to handle although the sights on the standard gun are less than desirable. Serious shooters should opt for the slightly more expensive Legend model with adjustable target sights. The fit, finish, and nostalgic appeal of the Sig Sauer P210 will make it worth every dollar. 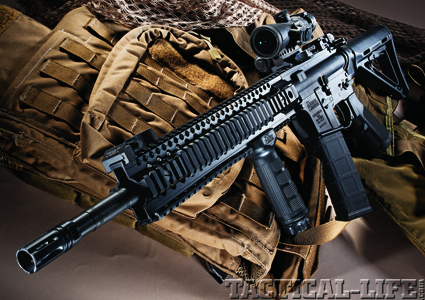