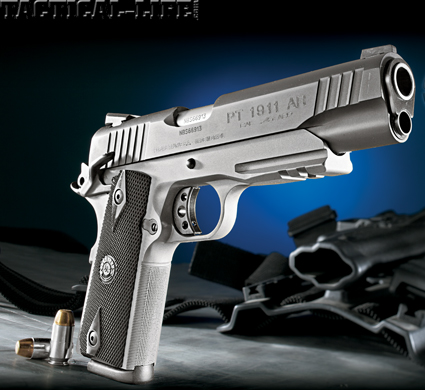 Equipped with 19 standard features you’d normally expect from a custom shop, but carrying a remarkably low price, the 1911ALR proves to be a lightweight, versatile fighter at a tremendous value.

Taurus Manufacturing has offered full-size 1911’s in its line-up since 2005. “Don’t be surprised to find some new versions during 2011,” said Taurus President & CEO Bob Morrison. One of the current Taurus 1911 models—the 1911ALR—sports an aluminum alloy frame with a Picatinny rail. Equipped with 19 standard features you’d normally expect from a custom shop, but carrying a remarkably low price of $870, the 1911ALR proves to be a lightweight, versatile fighter at a tremendous value. 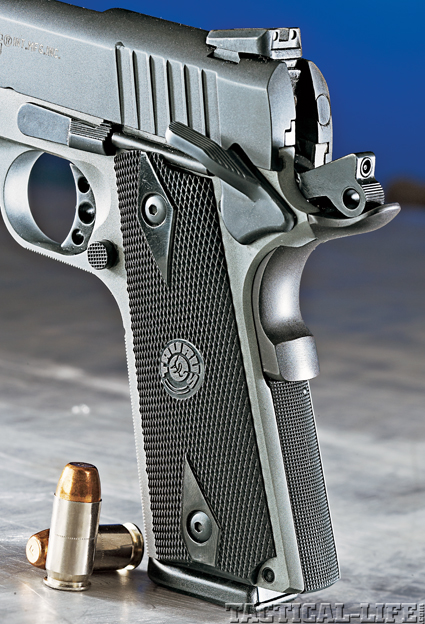 Getting a grip on the 1911ALR is easy, thanks to 30-lpi checkering on the frontstrap and mainspring housing, and the checkered black grips. The hammer of the 1911ALR features the lockable Taurus Security System, which gives it a thicker profile than a normal hammer.

The only immediate visual differences from a standard 1911 design that I noticed were the hammer (which has a slightly different shape because it contains the key access for the Taurus Security System) and the Picatinny rail. Everything else was classic 1911—familiar and good-looking. 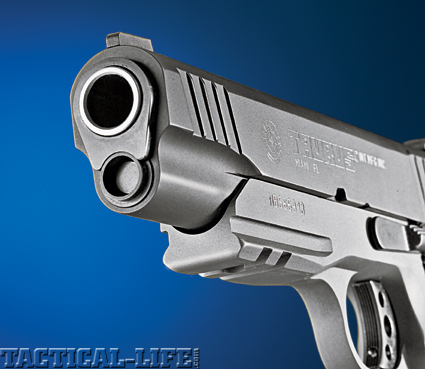 The Picatinny rail on the Taurus 1911ALR’s frame allows for attachment of a variety of tactical lights and lasers.

Just as familiar as the look of the 1911ALR was the means of loading it. Push the extended magazine release, catch the blue-steel magazine as it drops, and push in eight rounds of .45 ACP. Place the magazine into the beveled magazine well and push it home. A positive click indicates a well-seated magazine. Using the front or rear slide serrations, pull the slide back, let it go, and the first round chambers. Thumb the ambidextrous safety up—“Click!”—and the 1911 is in Condition One. The motions and sounds are all familiar—like talking to an old friend.

This old friend, however, has two features that 1911 purists may find offensive…or not. The first is the Picatinny rail, which changes the look of the gun. The second is the lightweight aluminum frame, which changes the feel. Although John Moses Browning may have never envisioned such features on his original 1911 design that doesn’t mean he wouldn’t have approved of these.

Even though the 1911ALR is full-sized—a “Government model”—it only weighs 33.6 ounces. As such, it’s a bit easier to carry than its all-steel counterparts. Still, with the accessory rail adding mass and volume to the traditionally slim dustcover, finding a suitable holster may prove difficult. If you plan to keep a tactical light or laser on the Taurus it adds more complexity to finding a suitable holster.

The feel or comfort or ease of drawing a handgun is of course one of the more subjective areas of handgun evaluation, but I found the 1911ALR presented well—intuitively, in fact. One of the 1911’s most often touted strengths is an inherent ability to aim in accordance with the natural motion of a shooter’s arm and hand. The 1911ALR did just that. The checkered black plastic grips offered excellent purchase and seemed well suited to the task. Significantly aiding my grip was the 30-lines-per-inch (lpi) frontstrap checkering as well as the aggressive 30-lpi checkering of the flat, polymer mainspring housing. The triggerguard also features the 30-lpi checkering.

The 1911ALR featured Novak low-profile standard sights that provided an easy-to-acquire and familiar sight picture while reducing the potential for snagging on clothing during a draw. Most gunfighters will argue for the necessity of night sights and I would agree, regardless of whether a shooter employs a laser sighting system on the Picatinny rail. 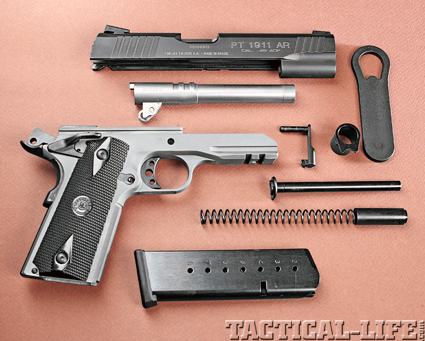 Breaking down the 1911ALR for a good cleaning requires use of a barrel bushing wrench (included with the gun) and follows the straightforward procedure for disassembly and cleaning of a 1911.

Shooting Impressions
Firing the 1911ALR brought to the fore its excellent custom shop trigger job. The single-action stroke with its skeleton-serrated trigger demonstrated just a hint of take-up but broke cleanly with no overtravel. The target hammer fell cleanly with every trigger squeeze. The beavertail grip safety with memory pad went unnoticed and therefore clearly accomplished its purpose.

Boxes of ball ammunition fed and fired reliably—the custom internal extractor yanked rounds out consistently, easily clearing the lowered and flared ejection port—but the 1911ALR did choke with some jacketed hollow points early on. Even though the Taurus comes with a polished feed ramp and barrel throat, two self-defense rounds in separate magazines failed to go into battery (the noses of the rounds hung up on the feedramp) and required yanking the slide rather aggressively to free the stuck round and the magazine. I ran some more ball ammunition through it and then tried the jacketed hollow points again. This time, they fed and fired reliably as did everything else I ran through the gun.

With a 5-inch custom fit barrel with a gauged bushing, and overall length of 8.5 inches offering a long sight radius, I expected excellent groups from the 1911ALR. And when I did my part, I got them. Firing from a bench rest at 15 yards resulted in consistent groups that easily exceeded the accuracy needed for defensive purposes. Recoil on the aluminum-framed 1911 was stout but really not much more than you would expect from an all-steel 1911. Follow-up shots were a breeze and with a little practice, any shooter could put all eight rounds into the center of a human silhouette target in less than 8 seconds. Credit the Taurus’ excellent sights, grips, and frontstrap checkering. They work in harmony. 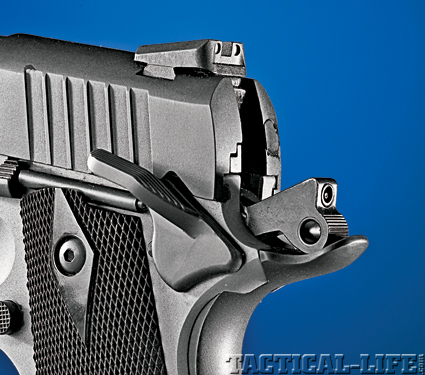 The hammer of the 1911ALR features the lockable Taurus Security System, which gives it a thicker profile than a normal hammer.

After firing the last round in a magazine, the metal magazine follower faithfully pushed the slide lock-up, catching the slide and holding it open. Thumbing the magazine release button faithfully dropped an empty eight-round magazine, clearing the way for a loaded magazine to find its way through the magazine well and seat with a reassuring click. Thumb the slide release lever down—or just tug the slide back—and the 1911ALR was back in battery, ready to go. This part of the evaluation was the right kind of boring.

All in all, the Taurus proved out several clichés: It’s the little things that count. Attention to detail matters. The whole is never greater than the sum of its parts. 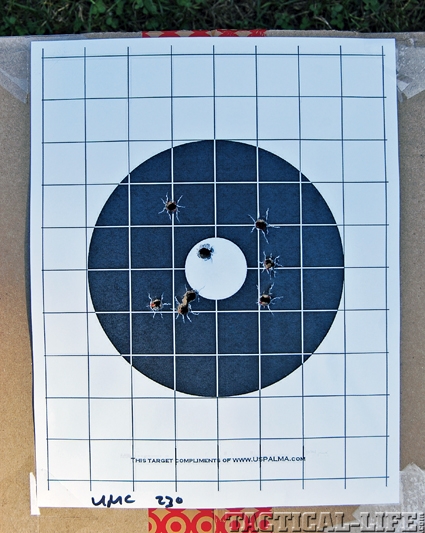 The author found the 1911ALR to exhibit good combat accuracy, with the UMC 230-gr. FMJ ammo grouping at just over 3˝ at 15 yards. Mark Kakkuri photo.

Final Notes
A quick trip around the Internet’s various gun forums yield a plethora of opinions on all things gun related and, like all firearms, the Taurus 1911’s have enjoyed both praise and criticism. Mostly, however, I’ve found that owners of Taurus’ 1911 love these guns and consider them a tremendous value, providing the same features as other 1911’s that are significantly more expensive. I admit to entering this Taurus evaluation with some trepidation, wondering whether the value proposition was overstated. It’s not, and you should find this out for yourself at your local gun range.

In the end, the 19 standard features, excellent performance, and the $870 price should result in the Taurus 1911ALR making the short list of versatile fighting handguns and even press other 1911 manufacturers to offer more gun for less money. Let the 1911 legacy continue! Find out more by visiting taurususa.com or calling 305-624-1115. 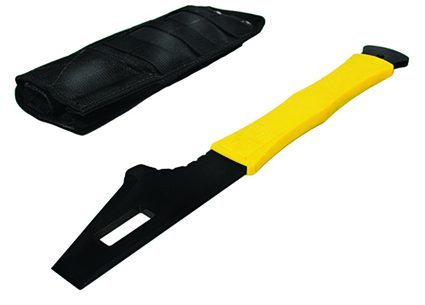 New guns and gear that caught our eye.

Equipped with 19 standard features you’d normally expect from a custom shop, but carrying…