100
SHARES
430
VIEWS
Share on FacebookShare on Twitter
The 24/7 Compact G2 offers a lot of features for the money. It’s extremely reliable, fits the hand well, and is capable of impressive accuracy.

The Taurus 24/7 Compact G2 is one of the best thought-out small handguns I’ve seen in a while. It’s striker-fired, double-action/single-action, and has “double-strike” capability, so that in the very unlikely event of a weak firing pin strike on a hard primer, you have the option of pulling the trigger again for a second chance. The .40 S&W version tested came with an 11-shot magazine that gives the pistol a total height of only 4.75 inches (the pistol is also available in 9mm and .45 ACP). Another magazine holding 14 rounds is included in the hard plastic carrying case—which means if you carry the gun with 11 in the magazine and one in the chamber, and you have the other 14-round magazine on your person, you have 26 rounds of .40 caliber hollow points at your disposal. If that is not enough capacity to fight your way to safety, you have gotten into a situation that is way beyond the capabilities of any handgun.

Gun Details
The sights are the low-profile, three-dot type, with the front sight fixed in a dovetail groove and the rear sight adjustable for both windage and elevation. I found them easy to acquire in bright sunlight or on the drizzly, gray afternoon when I did most of the range testing. It’s not a pocket pistol, but it’s not bulky either—weighing only 23.5 ounces and having an overall length of just over 6.5 inches. The 3.5-inch barrel has six grooves (right hand) with a 1-in-16-inch twist, and the frame is a black polymer topped by either a blue or stainless slide. The small Picatinny rail beneath the slide allows you to hang any manner of lights or other accessories. 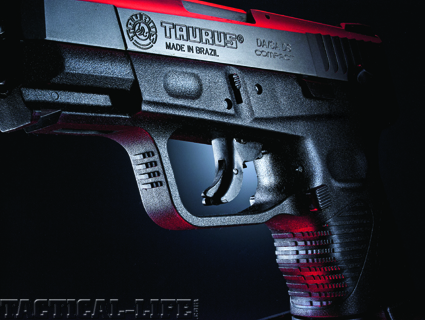 A nearly ideal compromise between concealment needs and shootability, the new Taurus is still large enough to afford a comfortable firing grip.

The controls on the gun are logical and easy to manipulate. The safety is located where it should be and feels very much like a thumb safety on a 1911. It is ambidextrous, and I know some have expressed worries about an ambidextrous safety latch adding unneeded bulk. I can say two things about that—the first is that the safety latch is small enough to add almost no extra width to the gun, and the second is that an ambidextrous safety is only “unnecessary” if you are right-handed and your right hand is in good working order. One can imagine times in a gunfight when it might not be. 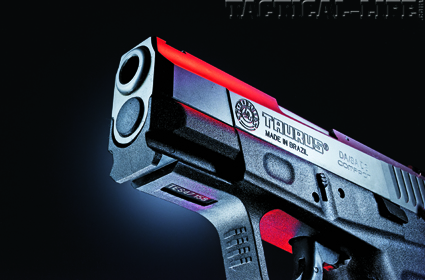 The slide rail on the Taurus 24/7 Compact G2 allows the use of accessories such as lights and lasers on this compact handgun.

The safety latch also functions as a decocking lever. Press it up for “safe,” press it down for “fire,” and press it way down past the firing position to uncock the gun and ready it for double-action shooting. A firing pin block and trigger safety (the little paddle-like projection found on most polymer guns these days) render the gun safe if dropped. There is a loaded chamber indicator and a little red button at the rear that indicates when the gun is cocked and ready for single-action fire—though the position of the trigger in relation to the rear of the triggerguard is probably easier to see quickly.

In firing well over 400 rounds of both FMJ and HP ammunition from several different manufacturers, I had zero failures of any kind. While 400 rounds is by no means an exhaustive test, all indications are that this little gun is 100% reliable with whatever ammunition you happen to feed it. 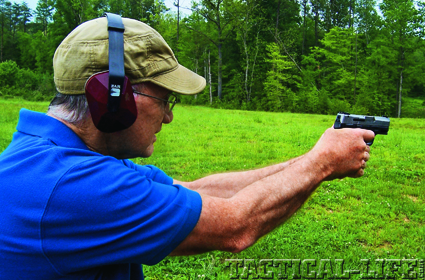 The author found the Taurus Compact easy to hang onto, even with the shorter magazine installed. This is not always the case with compact semi-autos.

With all that said, let me come to my only complaint about the 24/7 Compact, and that is the trigger. The trigger pull on this 23-ounce gun can only be described as “challenging.” The DA pull is extraordinarily long, with creeps and bumps. It felt as though it required significant effort to get it to fire. To be fair, I want to add that the trigger lightened up and smoothed out considerably after the first couple hundred of rounds. Also, the gun was pretty accurate. The single-action pull was also heavy, with a lot of creep and some hard spots. After several hundred rounds, though, the trigger lightened a little in SA and it broke right around 7.75 to 8 pounds.

I tested the 24/7 Compact for accuracy over a two-day period, firing off a sandbag rest from a bench at 15 yards. I also fired standing and unsupported at 15 yards and went through rapid-fire drills at 5 and 7 yards. For the rapid-fire drills, I started with the gun on the table in front of me, set for DA mode, since I assumed this would be the way many people would elect to carry the thing. I had no trouble making the transition from DA on the first shot to SA on subsequent shots. 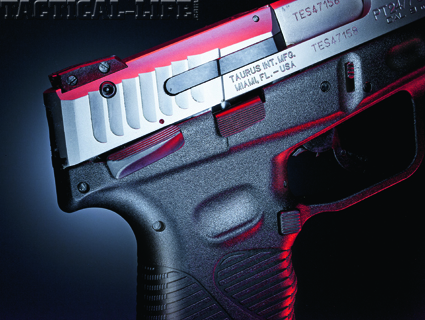 I was surprised by the testing from the bench. While it’s nobody’s target pistol and is certainly not meant to be, the little Taurus is more accurate than it should be. Or maybe I’m getting used to heavy triggers. Most groups averaged between 3 and 4 inches, but I often put four rounds into a 2-inch cluster, only to have the fifth one stretch it out to over 3 inches. This comes from celebrating one’s marksmanship too early.
The gun showed a preference for Hornady’s Critical Defense FTX load, giving an average group at 15 yards of just 2.48 inches. One of the five groups with this load went into just 1.63 inches, and none of the groups went more than 3.25 inches. I consider this more than acceptable for a compact semi-autopistol fired off a sandbag rest by a guy with eyes as old as mine.

I found the 14-round magazine even easier and more comfortable to hold onto than the shorter magazine. However, even the shorter one gives enough purchase to make the gun feel secure in the hand. The grip is just enough longer than those on other leading compacts to allow most of my pinky finger a place to rest—and I have XL hands. All the rapid-fire shooting was done with the shorter magazine in place—again to reproduce the way the gun would probably be carried. Most of the testing from the bench was done with the longer magazine. Grabbing the gun with the longer magazine inserted was like shaking hands with an old friend.

The 24/7 Compact G2 offers a lot of features for the money. It’s extremely reliable, fits the hand well, and is capable of surprising accuracy. If you count both magazines, and you should, it holds over half a box of hollow points—enough ammunition for anything short of what General Custer faced at the Little Big Horn. It can be carried double-action with the safety off, double-action with the safety on, or single-action with the safety on. The controls are sensibly laid out and smooth, and I found the sights excellent. Field stripping for routine cleaning and reassembly is easy and does not require any tools. It’s possible to spend a lot more than five hundred bucks on a defensive firearm that’s light enough and small enough to carry on your person constantly, comfortable to shoot and absolutely dependable. This new little Taurus might be one of the best deals going. Find out more by call 305-624-1115 or by visiting taurususa.com.