101
SHARES
38
VIEWS
Share on FacebookShare on Twitter
Designed by Taurus as a personal defense handgun, the compact Judge Public Defender is built on the smaller Taurus Model 85 frame, making this 2˝ snub nose one of the most potent close-quarters combat handguns.

The idea of using a shotgun for home-defense is as old as the origins of the double barrel hammer guns of the 19th century. There’s an old west saying that nothing dispenses justice quicker or settles a dispute faster than a double-barreled shotgun. When Winchester made a six-shot lever action shotgun in 1887 and followed it with a slide action in 1893, shotguns were elevated to a new rank among lawmen, homeowners, and outlaws alike. In a shootout, either facing a bunch of liquored up drovers on the dusty streets of a 19th century cow town or facing down an armed assailant outside of a 21st century convenience store, a shotgun has been one of law enforcement’s preferred weapons for more than 150 years. For home-defense there have been mixed opinions about shotguns for decades, mostly because in the confines of a home invasion, a shotgun or rifle barrel is easy for an assailant to grab hold of in close quarters. The jury has long been out on that analysis, but the Taurus Judge line of .410 shot shell revolvers has handed down one verdict that no one can dispute… a pistol that can dispense five rounds of .410 gauge 000 buckshot and maintain a tight pattern at up to 7-yards (a far greater distance than most in-home confrontations with a criminal) makes one heck of a deterrent to anyone on the receiving end. 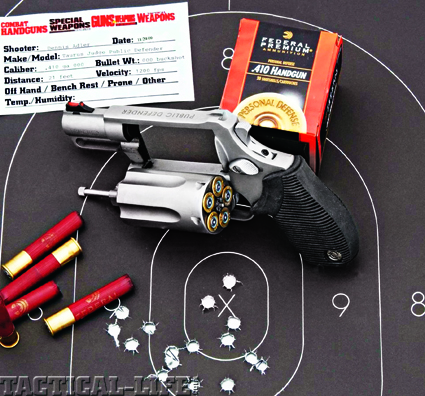 Among the various Judge models offered by Taurus, the new Model 4510 Public Defender may well prove to be the perfect self-defense handgun for home or concealed carry options. For those who favor revolvers over semi-autos, the Judge PD offers an interesting alternative. Since most compact wheelguns carry only five rounds of .38 Special, +P or .357 Mag, you don’t give up anything with the Taurus Judge PD. What you gain is the option to carry five heavier .45 caliber hollow point cartridges, or better, five of the latest technology, hard-hitting Winchester or Federal Premium .410 gauge 000 buckshot shells—first strike defensive loads that have superior stopping capability over regular .410 buckshot or even traditional 000 buck loads that have only three pellets.

The idea for combining a .45 caliber cartridge and a .410 shotshell in one gun is not new—it has generally been limited to specially built over/under derringer-style pistols. Taurus International’s President and CEO Robert Morrison, asked the engineers at Taurus if they could build a revolver chambered for both a .45 LC cartridge and a .410 shotshell. The result was the original Judge chambered to fire 2½-inch shotshells and .45 Colt cartridges.

When the new, long-cylinder 3-inch magnum version was introduced, it raised the ante with 000 buckshot carrying five pellets, two more than conventional 2½-inch 000 buck. Thanks to improvements in 2½-inch shotshells brought about by the introduction of the Judge and specifically the new Public Defender, there are significant advantages to the PD that more than make up for its being restricted to 2½-inch shells.