What has now become known as Taurus International actually started from humble beginnings as a small tool manufacturer in Porto Alegre, Brazil over 60 years ago. Forjas Taurus (Taurus Forge) has become a diversified, international company and one of the largest small arms manufacturers in the world. Their first firearm (1941) was a revolver, but in 1974 Beretta won a contract to produce small arms for the army of Brazil. Part of the deal was that Beretta had to build a factory in country and use local labor. When the contract ran out in 1980, Beretta sold the plant “lock, stock and barrel,” to Taurus and everything that once belonged to Beretta, including drawings, tooling, machinery, and a very experienced work force belonged Taurus. The company moved into the pistol business, and immediately sought to improve on the Beretta design, resulting in the popular Taurus PT-92 and PT-99 9mm pistols. 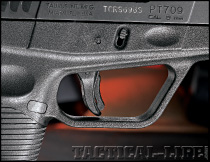 Since these early and humble beginnings, Taurus has not looked back, trying to develop innovative products that will satisfy the growing number of armed citizens, cops and military officers that are demanding their products. The latest addition to their growing product line is the new Model 709 Slim, a super-compact 9mm pistol that will easily slide into a pocket or waistband. The increasing clamor for smaller and smaller handguns with larger and larger calibers is a fascinating trend and can’t help but wonder how small the manufacturers can go and how large the caliber will get. The 709 Slim is a nice combination of power and size, and have no doubt that Taurus will have a hard time keeping up with the orders for this new “pocket blaster.”

Gun Details
Slim is the name of this slick new entry into the Taurus line for a reason. Available in both blue and two-tone stainless this small pistol can easily fit into places that are not normally concealment locations. Due to the slim lines, there are no revealing bumps, which makes concealed carry easier than ever before regardless of your needs. The Model 709 is available only in 9mm, features a striker-fired single-action trigger with the shortest reset that I have ever felt on a factory built pistol. With a 7 + 1 shot capacity (9 + 1 with extended magazine), this slick little “slim-line nine” will handle just about any situation that a lone individual might face. 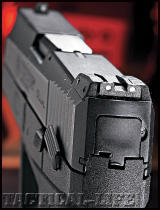 Sleek and lightweight in design, the pistol weighs just 19 ounces, measures a mere 6.24 inches in length and is less than an inch thick. The triggerguard is big enough to engage the trigger even when wearing gloves. A lever in the face of the trigger prevents reward travel unless it is squarely engaged so inadvertent compression of the trigger is reduced, a nice touch when carrying the gun in deep concealment. Also included on the 709 is a visual loaded chamber indicator as well as the Taurus Security System that allows users to securely lock the gun using an inconspicuous keylock.

The low-profile three-dot sights are a nice compromise between having enough of a sight picture to see quickly and keeping them small enough that they don’t snag while being worn concealed or hang up on the draw. While the three-dot configuration does not work for my tired old eyes, they do work for most people. In my case, I painted the front sight with a layer of white appliance touch up paint and once it cured, covered that layer with some bright finger nail polish. By doing this, I had a high visibility sight that can be seen in a wide range of light conditions that will stand up to gun cleaning solvents. The contrast worked well with the rear white dots and took a minimum amount of effort to do.

The polymer frame offers a trim grip with molded texturing for a solid hold. The grip has a nice curve to the backstrap that adds gripping surface without bulk to the compact lines. Some will say that the grip is actually too small for getting a solid two-handed hold is a challenge, but keep in mind what Taurus was trying to accomplish here. This is not a service grade or even an off-duty gun, this is a deep concealment weapon that will go anywhere, hide anywhere but still offer enough power to end an attack quickly. When loaded with a street-proven 9mm load, the Taurus 709 Slim should easily do this if the shooter does their part. To help add to the grip surface, the polymer frame has index pads on each side of the frame below the slide. By inserting the support hand thumb into one of these indents, the support grip will be consistent while also offering an additional contact point. 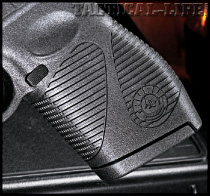 Another nice feature of the Slim is the simple takedown procedure. One cannot help but compare it to the Glock in that the slide is pulled to the rear, the dual pull down latch is manipulated and the slide comes off the end of the frame. The Slim also has a slide lock lever and a simple frame mounted, push up safety that locks the gun’s action.

Range Time
I headed off to the range with the new Slim and what I had left of my dwindling supply of 9mm ammo. I don’t like to bench rest guns intended for fighting, especially a gun like this whose sole purpose is close quarter personal defense. I have been a serious student of individual combat my entire adult life and this study, along with my personal experiences, has led me to a number of conclusions about the subject.

One of these is that more people miss their target because they cannot control the trigger versus improper use of the sights. Forget point shooting versus sighted fire, if you can’t control the trigger, you can’t control the gun—period. Thus, I test the accuracy of this type of gun off-hand at reasonable combat distances. In the case of the Slim I chose 50 feet, though in reality that is actually a bit far. But what the heck, if it will hold a 50-foot group, closer should be a snap.

Hornady ammo is known for its accuracy and the first four rounds went into an inch red dot at the center of the Birchwood Casey Dirty Bird target. On the fifth shot, I could not help but marvel at my wonderfulness and you guessed it, I pulled the shot low left.

All the loads used would be a good choice for the Taurus Slim, though the felt recoil will be a challenge. The grip of the Slim is quite small in an effort to keep the gun as compact as possible. This being the case, there is not much to hold on to. Rapid fire groups required a great deal of concentration, so if you are going to carry the Slim, you might want to consider a load that is not as hot. Remember, the most battle proven loads will be of no use if you cannot hit what you are shooting at and rapid follow-up shots might be needed to end the fight quickly. Choose your load wisely for this little gun.

The remainder of my range time consisted of classic drills like the Bill Drill, El Presidente’, the Double Nickel and running through the Crucible instructor standards. When I ran out of ammo, I had fired 337 rounds through the Slim without a single malfunction. Several folks who were at the range tried out the Slim and all commented that the grip was indeed small, but it was also a very nice gun to shoot.

Once again, this gun has the shortest reset of any factory gun I have event tested. This easy-to-work trigger action resulted in some fine split times as long at I concentrated on hanging on. Did I encounter any problems? Sure, but they were not the fault of the gun.

Forget trying to do a competition style speed load with the Slim. The short grip, slim magazines and flush magazine button made such a reload all but impossible. With practice you will get better, but if a larger button and grip were incorporated into the design, then it would no longer be Slim, would it? Other than this, I found the Taurus Slim to be a very pleasing gun. Would I buy it? Heck yes! As a matter of fact, I might just add this Taurus Slim to my personal collection. Get your own from Taurus by visiting their website taurususa.com or calling them at 305-624-1115.