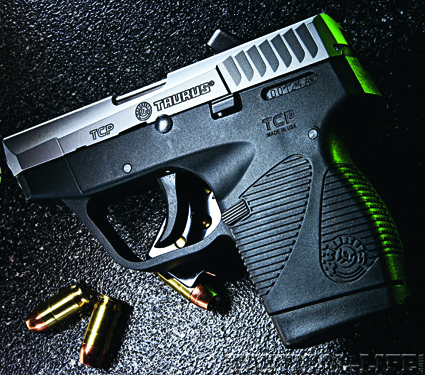 New from Taurus is the 738 TCP, a mini .380 ACP pistol with a 6+1 cartridge capacity, and weighing a mere 10.2 ounces. This model has a stainless steel matte finished slide and black polymer frame.

The rise of what I call the “Micro .380 Pistol” began about three years ago, and has just about peaked in 2010. Just about every major handgun manufacturer, foreign and domestic, is making one of these tiny jewels and the common denominators seem to be a polymer frame, steel slide, ultra-short 2- to 3-inch barrel, a DAO trigger (with one exception), and a 6-plus cartridge capacity. They are highly compact, lightweight, thin, and due to the use of a locking breech mechanisms are a lot less bulky than older style blowback pistols like the Walther PPK, Sig Sauer P230 or other older designs that relied on slide mass and a big recoil spring around the barrel for proper operation.

Gun Details
The new Taurus 738 TCP comes in a black nylon carrying case that attaches to the belt. It has a top that is retained by magnetic snaps, which gives it more of the look of a pouch for a palm pilot or digital camera—a very practical idea. At first I thought that drawing from the case would be slow and prone to dropping; but the owner’s manual shows just how the gun is placed in the case and the technique for getting a faster presentation. I tried it and it worked reasonably well—it’s certainly not a fast-draw rig, but will work and the case protects and hides the firearm. 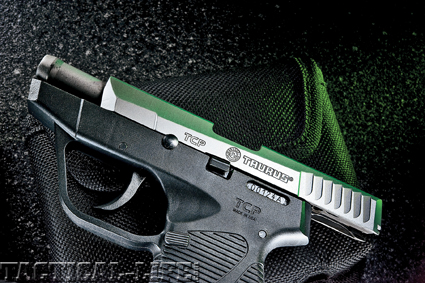 Ultra-slim and compact, the Taurus 738 TCP has a minimum of controls. On the left side is the takedown pin, slide release catch and mag release button.

A thorough examination of the little pistol revealed no obvious defects in workmanship or blemishes on exterior surfaces. Hefting the 738 TCP, it almost doesn’t feel real at just 10.2 ounces empty. Overall length is a mere 5.25 inches, overall height is 3.75 inches (with standard magazine) and the width is an amazing 0.87 of an inch. The Model 738SS I tested has a matte finished stainless steel slide and a 2.84-inch barrel, both left “in the white.” The slide has deep, well-shaped serrations that helped when retracting the slide for loading, plus the slide itself is rather artistically sculpted for weight reduction and a more streamlined look. Contrasting with the slide is a matte black polymer frame; the grips being integral with the frame and having stylized, grooved panels on the sides that extend around the front and backstraps for an improved gripping surface. On the left side of the frame are the slide release lever, takedown pin and magazine ejection button. There is no manual safety and no magazine safety—if you don’t want the gun to fire, don’t pull the trigger.

The 738 TCP is equipped with the Taurus Security System. At the right rear of the frame you will see what looks like a small keyhole, and that’s basically what it is. Two “keys” are supplied with each pistol and are used to engage the system. The handgun must first be unloaded and the magazine removed. The key is then inserted into the mechanism and turned clockwise until a click is felt and/or heard. The mechanism will also protrude very slightly from the frame for a visual confirmation. At this point the trigger is now locked and a magazine can be inserted into the gun if so desired. To disengage the Taurus Security System, just insert the key and turn it counter-clockwise until the mechanism is flush with the frame. The gun is now ready to shoot. Another less obvious feature is the extractor on the slide, which acts as a loaded chamber indicator.